88 Films brings you classic martial arts action in “The Master” from producer and director Tsui Hark, in glorious high-definition from a stunning 2K remaster, starring the phenomenal Jet Li!Order your copy via 88 Films or Amazon NOW!

Martial arts superstar Jet Li takes the lead as “Jet”, a Chinese martial arts champion. When “The Master” was made in 1989, Li had already established himself as a popular young movie star in “The Shaolin Temple” films. However his subsequent films such as “Born to Defence” and “Dragon Fight”, did little to set the Hong Kong box office alight, and “The Master” was held back. Producer and director Tsui Hark could see the star potential in Li and cast him as the legendary martial arts master Wong Fei Hung in “Once Upon a Time in China”, released in 1991. Its mammoth success cemented Li as one of Asia’s leading movie stars, and “The Master” was subsequently released in 1992.

Seven Little Fortunes member and action legend Yuen Wah stars as “Chan Hou-tak / Uncle Tak”. Yuen Wah famously doubled for Bruce Lee in “Enter the Dragon” and had significant roles as villains in “Eastern Condors”, “Dragons Forever”, “The Iceman Cometh” and “She Shoots Straight”. He became internationally known for his role as the “Landlord” in the box office smash “Kung Fu Hustle”.

Real life World Kickboxing Champion Jerry Trimble puts in a villainous turn as the psychotic “Johnny”. He would go on to feature in cult classic “The King of the Kickboxers”. Having appeared in the hit movies “Dragons Forever” and “Police Story 2”, Crystal Kwok stars as “May”, who works for the bank that want to foreclose on Uncle Tak’s store. American actress Anne Rickets plays the feisty martial arts student and gymnast “Anna”.

Some scenes are particularly bloody

Former martial arts teacher Uncle Tak runs a Chinese herbal medicine store and clinic in Los Angeles. One of his former American students, Johnny wants to get rich by monopolising martial arts schools in the United States. To accomplish this, he wants to beat all rival Asian masters, and tries to kill Uncle Tak.

Jet, Uncle Tak’s best student and a Chinese martial arts champion, arrives in Los Angeles to find his old master. Jet’s naivety soon finds him dealing with local thieves and gang rivalries. Through a loan manager called May, Jet learns a little about the American way of life, and discovers the bank are trying to foreclose on his Uncle’s store. Befriended by a trio of would-be gang members, and a young and feisty gymnast named Anna who saved Uncle Tak, can Jet save the clinic, and end Johnny’s quest for domination?

The finale is worth the price of admission alone 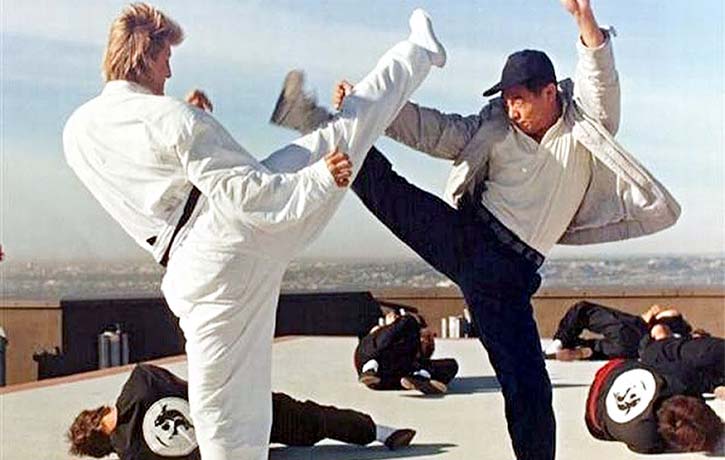 Jet Li looks young and energetic, with that little touch of innocence about him, just like his “Shaolin Temple” days. Movie veteran Yuen Wah is as acrobatic as ever, even though he is playing the role of the elder master. A renowned World Kickboxing Champion in real life, Jerry Trimble is excellent as the bad guy, and his impressive martial arts skills fit in perfectly with the hard and fast Hong Kong-style action choreography. In fact the best of the fight scenes invariably include Trimble in them.

Although much of the film is played for laughs, the action is nearly always quite brutal and serious. The opening fight between Yuen Wah and Jerry Trimble is particularly bloody and wince-inducing. Just about every fight scene has someone suffering nasty injuries from broken glass.

Jet Li is as nimble as you might expect as he jumps and butterfly kicks off and over cars and obstacles. Thankfully the majority of the action is wire-free, although it does look like Li is doubled in a few places. A few frames also look like they have been sped up, but I imagine this is due to some of the henchmen having trouble matching Jet Li! Thankfully, his scenes with Trimble are filmed normally to allow them to perform to the best of their genuine abilities.

The finale sees the speed and complexity of the choreography cranked up considerably. The inevitable showdown between Jet and Jerry is the highlight of the movie, and as the cliché goes, worth the price of admission alone!

Despite starring martial arts megastar Jet Li in his prime, “The Master” has had little exposure since its initial release in 1992. At the time, Li had made very few films in a modern-day setting, and this is an excellent early taste of things to come later in his career.

It’s lack of popularity is probably mostly to do with the clichéd and cheesy plot and dialogue, and fairly poor acting in general. The humour can be very hit and miss, although there are some genuinely funny moments, such as Crystal Kwok trying to teach Jet to drive.

Navigating the hurdles in LA

Jet Li always delivers that natural charm of an innocent caught up in circumstances beyond his control. There are also some odd editing choices, but thankfully the action scenes are well-filmed, and movies from this era and genre are all about the quality of the action, which is high!

It’s always good to see Yuen Wah on screen, although he seems to spend a lot of it suffering the hardest hits and most painful looking stunts. Jet Li is in peak form with surprisingly little wirework employed. Jerry Trimble makes for a suitably-skilled foe for both the Hong Kong stars, adding to the excitement of the fight scenes.

The 88 Films Blu ray release includes new sleeve artwork from Kung Fu Bob O’Brien, with an A3 poster and limited edition postcards. There are original and remastered audio options in Cantonese and English, and two engaging Audio Commentaries, one with Hong Kong movie experts Mike Leeder and Arne Venema, and the other with sleeve artist Kung Fu Bob. There is a new interview with actor and stuntman John Kreng, and archival interviews with stars Crystal Kwok and Yuen Wah.

If you haven’t seen “The Master” before, this beautifully presented and uncut release is an opportunity to see Jet Li in his physical prime, just before he became the major Asian box office star fans know and love today.

“The Master” is available on fantastic Blu-ray NOW – order your copy via 88 Films or Amazon!

Do you remember “The Master” from some 31 years ago? What Jet Li films from the 1980’s and 90’s do you love revisiting? Which other classic TSUI HARK-directed movies do you enjoy most and which titles would you want to see get the Blu-ray treatment? Let us know in the comments below; Like, share and join in the conversation on Facebook and follow us on Twitter & Instagram!

FOLLOW THE MASTER: Get admission into the FU-niversity of these Top 5’s, Top 10’s, exclusive interviews, obtain MASTERY whilst training in KFK OFFICIAL wear and subscribe for more CLASSIC 80’s & 90’s KUNG-FU action on YouTube!