No ordinary movie, “A Touch of Zen” (director King Hu’s third film after “Come Drink with Me” and “Dragon Gate Inn”) is a symbol of recognition, the cornerstone of a new era for Chinese-language cinema and a source of inspiration not only for future filmmakers but for viewers themselves. The majestic mountainous landscapes, vivid colours, outstanding use of camera movement, creative use of diegetic and non-diegetic sound, the unique concept of the movie and of course the brilliant acting are some of the many reasons that led to the definitive success of King Hu’s masterpiece.

“A Touch of Zen” was the first Chinese-language film to win The Technical Grand Prize at the 1975 Cannes Film Festival and the very first wuxia movie to do so at an international film festival. This piece of art is a symbol of the rise of Chinese films as an aesthetic force in world cinema and set the foundations for many future films.

Heading the cast is Taiwanese-born actress and film producer, Feng Hsu as one of the main protagonists – the beautiful Yang. She is a well-trained martial artist and a fugitive from the Eastern Depot, the notorious secret police used by the Ming Dynasty to suppress any form of opposition.

Chun Shih portrays the second main protagonist in the film, Ku Shen Chai, a modest and somewhat unambitious artist. After the arrival of Ouyang Nian (Tian Peng) and meeting the young and attractive Yang, Ku’s life changes completely. From a naive, passive character he has to take himself in hand and help protect his loved one.

Back to back captivating scenes 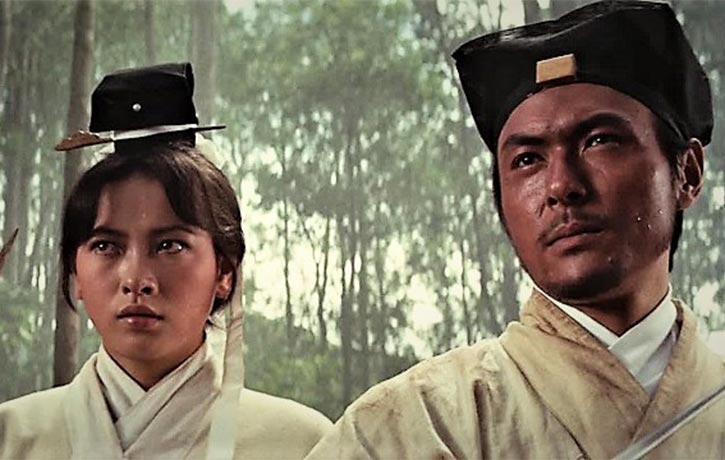 Abbot Hui Yuan or the so-called Golden monk (Roy Chiao Hung) is another central figure in the movie. Roy Chiao portrays a legendary Buddhist monk who presides over a monastery high in the mountains. He also becomes Yang’s chief ally against the Eastern Depot and in particular against Men Da (Wang Rui), the corrupt eunuch’s fearsome commander.

The story itself is largely presented through the point of view of one of the main protagonists, Ku – a young, talented painter with a tendency towards being clumsy and ineffectual, which adds a sense of humour to the movie. He is constantly shadowed by his over-protective and controlling mother. On the set up of the story, a stranger arrives at the rural village. The enigmatic Ouyang Nian is determined to meet Ku and to get his portrait painted by him. Later on, Ku realizes the real reason behind the sudden visit. The stranger is in fact a superior warrior, working for the Eastern Depot, the notorious secret police used by the Ming Dynasty to suppress any form of dissension.

They’re pursuing a young female noblewoman (Yang) to capture and execute. Back in the day her father unsuccessfully attempted to warn the emperor of a corrupt eunuch. As a result, Yang had been hiding out along with General Shi (Bai Ying), and another political dissident, Lu, who pretends to be an herbalist.

Feng Hsu as Yang is an adept martial heroine

A notable element here is the fact that the male protagonist Ku, while not a martial artist is determined to help Yang (who is). Together they team up against the corrupt Eunuch Wei. Their relationship develops after spending a night together which sees Ku become more confident, assertive and determined to do everything possible to protect his loved one. He comes up with a plan called the ‘’Ghost Trap’’ to fool the guards into believing they are being haunted by the forces of the undead.

The story then moves into the nocturnal battle at the haunted fort between himself, Yang and the Eastern Depot. As a result, Ku and Yang separate and he is unable to find her anywhere. He’s told that she has left him and not to follow her. However, he manages to track her down at the monastery of the legendary Buddhist monk Abbot Hui Yuan who becomes Yang’s chief ally against the Eastern Depot. Meanwhile, Yang gives birth to her and Ku’s child and becomes a renunciant.

Ku takes the newborn child, but while on the run is located by Hsu Hsien-Chen  the corrupt eunuch’s fearsome commander. Yang, General Shi and Abbot Hui come to Ku’s rescue. In the ensuing battle, Yang and Abbot Hui are subjected to major injuries, with the Abbot bleeding golden blood. It’s a multi-dimensional ending that’s left rather wide open to individual interpretation, dealing with lofty subjects such as good and evil, ignorance and wisdom, life, death and enlightenment symbolised by Buddhist concepts.

Yang wound up and ready to pounce

The movie begins by establishing a number of shots of the mesmerizing, mountainous landscapes near a small rural village in Ming China. The first part of the movie is entirely concentrated on capturing the magnificent power of the Taiwanese scenery through a variety of camera movement techniques. Through the use of vivid colors, breathtaking landscapes, introducing the main protagonists and establishing their relationships, Hu lays the foundations for the action scenes that explode into these by-then familiar places during the second hour.

Hu was not a martial artist himself, but was looking for something more than the already well-known and in some ways ordinary Shaolin fighting style. He manages to capture a sense of both extremely tight fight choreography, classic kung-fu recreation shots with many jump cuts and at the same time, draw a link to Chinese opera and traditions.

A great example of Hu’s unique approach is both the very first fighting scene between Yang and the superior warrior, working for Eunuch Wei and the infamous battle scene in the Bamboo Forest. The very first rooftop fighting scene is a stunning piece of action dance, delicately handled and marking the beginning of the second half of the movie imbued with various gravity-light fight scenes in the classical wuxia film style.

There’s a fine sense of balance between the impressive panoramic views and sharp action in the Bamboo Forest scene, an example of what pure combat ‘poetry in motion’ looks like.

Hu’s refined command of wuxia action is exceptional; the use of tiny trampolines hidden under the camera frame to create the jumping and bounding combat shots, more common to the genre itself adds to the overall sensation of weightlessness.

“A Touch of Zen” is one of the quintessential films of Chinese-language cinema and a personal milestone for its director King Hu. Its success and high praise from prestigious film festivals provided the impetus for the rise of a new wave of film. More than 30 years later, many films, including Ang Lee’s “Crouching Tiger, Hidden Dragon” and “House of Flying Daggers” were influenced by this 20th century master-work. Unlike other wuxia films, “A Touch of Zen” carries Hu’s stamp, a personal energy signature that has left an indelible influence on the modern development of both Hong Kong and Taiwanese cinema.

Blaze of glory for the Abbot

The heavies get heavy handed

You can get your beautifully restored HD DVD copy with heaps of attractive extras from Eureka Video and a Limited Edition 3-Disc Blu-ray from Amazon.

47 years after its release, this one’s still going strong! What are some of your fave epic old- school kung-fu classics from the 70’s or earlier that you still enjoy viewing today? Let us know in the comments below, join in the conversation on Facebook and follow us on Twitter. Don’t forget to check out our other movie reviews for your daily dose of FU-flix!

Raised in a family of journalist and English teacher, Vasilena Spasova was always drawn to writing. This feeling only grew stronger and she decided to move to the UK and pursue her dream career taking up Film Studies and Theatre. After exploring the depths of different film genres she soon found the magic that most resonated with her: martial arts films. This helped her to fully understand the power of martial arts and the positive impact they can have on society and people’s mindset. "Enter the Dragon" along with "Once Upon A Time in China" are her all-time favourite martial arts films!