Following his sabbatical from flying knees and falling elbow strikes for the peace and solitude of a Buddhist monastery, Tony Jaa returns to his throne as the King of Thai action stars with Tom Yum Goong 2 (aka The Protector 2). Aided by the leading lady of “Chocolate” Jeeja Yanin and dynamic newcomer Marrese Crump, it’s a welcome return, indeed, and while not without a few quirks (most of which Crump single-handedly makes up for) the film and its leading man are as energetic as ever. It’s safe to say that Jaa’s return to movies has been worth the wait.

Reprising his role of Kham from the original film is Tony Jaa. If you didn’t know going in that this is Jaa’s first time in front of a camera since “Ong Bak 3”, you’d never guess it. He’s just as alive as he’s always been and handles the film’s abundant action with great ease.

Joining him in the role of Ping Ping is Jeeja Yanin, marking the first onscreen team-up between her and Jaa. Thai comedian Petchtai Wongkamlao, a frequent collaborator of Jaa’s, returns to his role of police officer Mark, while the mantle of the arch-villain Mr. LC falls into the hands of RZA. It’s no secret the love that the face of the Wu-Tang Clan holds for martial arts, his increasingly frequent appearances in kung fu-heavy films is indicative of that!

Taking on the duties of his number one henchman is Marrese Crump in the role of Number Two (please keep the Austin Powers jokes to a minimum!). The film marks Crump’s first major onscreen appearance and you can bet it won’t be his last. Like Yayan Ruhian in “The Raid” this is one instance where the villain is arguably the real star of the film!

Five years after his previous adventure in Sydney, Kham is living peacefully in his native Thailand with his beloved elephant that he regards as a brother. The bond between the two of them is exemplified when Kham refuses to sell the elephant to a local animal trader, and that loyalty ultimately sees him on the run not much later after being framed for the trader’s murder. The trader’s nieces Ping-Ping and Sue-Sue both believe Kham guilty and embark on a vendetta to avenge their uncle, while Kham’s ally in law enforcement Sergeant Mark, tries to lend his help in clearing his friend’s name.

Eventually, the two sisters track Kham down, only for their quest to be interrupted by the arrival of a cadre of gangsters lead by a formidable fighter known only as Number Two. After a protracted battle, Number Two kills Sue and kidnaps Kham and Ping. Once in their headquarters, Kham meets their leader, Mr. LC, and after proclaiming how impressed he is with Kham’s fighting skills, offers him a choice – assassinate a local politician, or watch Sue and his kidnapped elephant die. Left with little choice but to play along, Kham must find a way out of his dilemma or sit by and see his beloved brother killed. 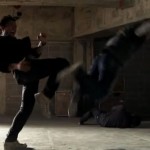 Theres a bent spine how do you like it 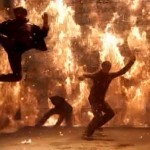 Punching the nerves out

Number Two has the upper hand

Much has been made of the fact that, for the first time in his career, Tony Jaa would be indulging in wire-work and CGI in making Tom Yum Goong 2. While many have interpreted this negatively, especially given the notorious physical authenticity of Jaa’s style of action, this seems to stem less from Jaa losing his touch and more from the film’s 3D conversion.

Watching it in 2D, you get a sense that several of the film’s action sequences were specifically intended to take advantage of a 3D-showing. That accounts for the moments of objects or people flying directly into the camera lens, and certainly explains the gimmick behind the film’s pyrotechnic brawl in particular, in which Jaa and his opponents do battle while surrounded by a CGI-blaze with their legs engulfed in flames.

While this approach might well be impressive in a 3D showing, nearly all viewers of the film not in a Thai movie theater will end up seeing it in 2D, and the film’s wire and CGI-driven moments feel distracting as a result. Especially knowing that Jaa would never hesitate to set himself on fire for real if it meant intensifying the action (and you need look no further than the first “Ong Bak” for proof of that!)

Fortunately, the film’s Muay Thai-fueled action is strong enough to overpower an unnecessary 3D gimmick. Much of the thanks for that belongs to Marrese Crump. You’d think it’d be nigh on impossible for an enemy to seem like a serious challenge for Kham to overcome after Nathan Jones (ex-WWE wrestler and strongman) in the first “Tom Yum Goong”, and yet, Crump does just that as the lithe, agile yet explosive combat machine that he is.

Marrese Crumps energy and speed is awesome to see

Lecture from the arch villain RZA

One of the major strengths of the first film was the decision to pit Jaa’s elephant-influenced variant on traditional muay thai against a wide range of diverse fighting styles from around the world. Seeing Crump in action is almost like seeing all of those opponents rolled into one. He’s the type of martial artist whose background is so vast that he seemingly has nothing left to study, and his onscreen fighting style is a mind-blowing combo of capoeira, silat, kung fu, and who knows how many more!

Both he and Jaa also make use of the controversial art of jailhouse rock, the very existence of which has been debated, and which is said to have been developed in American prisons with its basis in traditional African fighting styles. Jeeja also gets to pit her taekwondo kicks against Crump, and the matches between the two are just as lopsided in his favor as are the ones with Jaa.

Crump’s adeptness at fighting off Jaa and Yanin also sees RZA largely sidelined from the action until the finale. A student of USA Shaolin Temple founder Shi Yan Ming, RZA is primarily a villain of the command-spewing variety, but he still manages to jump into the action by the end, double-teaming with Crump against Jaa and Yanin, with Crump once again stealing the show.

The distracting 2.5D effects aside, Tom Yum Goong 2 shows Tony Jaa still on top of his game. He continues to display the same power and versatility in the action and creativity with his choreography that he always has, and hopefully, this won’t be his last team-up with Jeeja Yanin. If her performance is any indication, she’ll jump back into action with the same ease as Jaa after her maternity leave. Nevertheless, no one in the film leaves a bigger impression than Marrese Crump, an action star in the making if ever there was one. Fans would do well to enter the film with that in the back of their minds;  come for Tony Jaa’s return, stay for Marrese Crump’s debut!

I thought you said you changed that tire

I accept your challenge