The team behind the earth-breaking martial arts sensation Ong-Bak returns with Chocolate – another Thai, bone-crushing, high-flying, street-sign-balancing, masterly-choreographed-extravaganza with an end scene for the history books! The film is released on DVD and Blu-ray in the UK via Showbox’s Cine-Asia label, and comes with a variety of special features, including several featurettes on the cast, the making of and the martial-arts choreography, as well as the usual deleted scenes.

Zen’s mom is the former girlfriend of a local mob boss who happens to fall for a Japanese gang lord. As punishment she gets a toe chopped of and has to walk with a limp for the rest of her life. What’s worse, she may never again see Zen’s yakuza father or they’ll all die. If this wasn’t enough of a bad start to any childhood, Zen’s also born autistic.

It turns out however, she also has some very special talents. As Zen grows up, it becomes apparent she’s not like the other girls, in more ways than one. She has astonishing reflexes and as luck would have it, lives next door to a Muay Thai (kickboxing) school. Zen’s hobby, when she’s not practicing kicking the life out of the veranda doorpost, is to watch martial arts movies on TV with hypnotic focus…and to catch flies with chopsticks!

When Zen and her mother discover a young boy and street hustler, Mangmoom, being attacked by a street gang, they decide to adopt him. The boy is not without merit and becomes something of a catalyst for the story. It doesn’t take long for him to figure out ways to make money from Zen’s extraordinary talents and as her mother grows increasingly ill from cancer, Zen and her magical reflexes are soon to feed the whole family.

Zen…making kebabs out of her adversaries

But cancer treatments are costly and as the stakes and takes get high, Zen looks to settle her ailing mother’s debts by seeking out the ruthless gangs that owe her family money.

Muay Thai, as you may well know, is the Thai version of kickboxing, made even more popular around the world of martial arts by 2003’s Ong Bak, starring Tony Jaa. Chocolate see’s the dynamic duo behind the film, director Prachya Pinkaew, and martial arts choreographer Panna Rittikrai, return with another, magnificently choreographed, story of revenge of the underdog.

Whilst in Ong Bak, we followed a poor, determined villager, played by Jaa, in pursuit of the stolen village Buddha statue head. With Chocolate the team pushed the boat out and introduced an autistic martial arts master. Where the fight scenes in Ong Bak were groundbreaking, Chocolate, as elaborate and magnificent as they are, they did not reach quite the same pinnacle of powerful, elegant performance.

Tony Jaa, who’s been trained in Muay Thai, since childhood allegedly spent four years rehearsing Muay Boran, the ancient version of Muay Thai, for the film and some scenes where rehearsed for up to a year and the results were surely evident! No stunt doubles, no wires, no tricks, has become the hallmark of this production team. I have a feeling though, more time and effort was put into that international breakthrough, than into Chocolate. With one exception, and what an exception: without giving too much away, the end scene deserves a nomination in the Martial Arts Movie Ending Hall Of Fame! Trust me, you’ll have to watch it a couple of times just to take it all in.

Zen ices up the combat 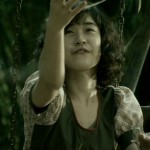 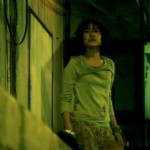 Sizing up the situation..

So, we’re treated to a story with more debt than the genre’s used to and interesting experiments in form as we follow Zen’s revenge story. There’s an air of Tarantino, Rodrigues and the other Hollywood pulp lovers over Chocolate; in the mixed slow motion editing, in the violent story, draped in a melodramatic style and in a passion for the perverted and the extreme; the face-off between an autistic Zen and an epileptic kung-fu master is enough to make Quentin Tarantino green with envy!

As Zen heads out to collect her mother’s final debts, it signifies the end of the building tension and also, the end of the plot! What follows then is a long string of fight scenes, with increased difficulty, not unlike the experience of being in an FPS computer game. But if you’re on the hunt for great fight scenes, look no further. When Yanin/Zen climbs-up her opponents to break skulls with her knees and elbows in the air, it’s pretty good martial arts poetry in motion! So, it’s not quite Ong Bak, but you could do a lot worse if you’re in the mood for some decent Thai fare!

Shes more than meets the eye..

A spinning back kick locks this guy up

A chance at normal life..