Action-adventure fantasy mystery film directed, produced, and co-written by Tsui Hark. It is a prequel to the 2010 international box office hit Detective Dee and the Mystery of the Phantom Flame, which starred Andy Lau. Taiwanese-Canadian actor Mark Chao takes over from Lau as a young Detective Dee, while Feng Shaofeng, Lin Gengxin, Kim Bum and Angelababy co-star alongside a returning Carina Lau.

Taiwanese-Canadian actor and model Mark Chao stars as “Dee Renjie” who goes to the capital to be an officer of the law. Chao first found fame as a no-nonsense cop in the hit Taiwanese television drama “Black & White”. Subsequent roles in the Taiwanese movies “Monga”, “Love” and “First Time”, raised Chao’s profile in Mainland China, landing him the role of Detective Dee.

William Feng Shaofeng stars as “Yuchi Zhenjin”, a skilled martial artist and the Chief Minister at the Da Lisi. Yuchi is appointed by Empress Wu to solve the Sea Dragon Case in ten days or lose his head. Feng rose to mainstream popularity after starring in 2011’s “Palace”, one of the most popular Chinese dramas of the year. The same year, he starred in Daniel Lee’s historical film “White Vengeance”, playing the powerful warlord Xiang Yu. He subsequently starred in the box office hits “Painted Skin: The Resurrection”, “Tai Chi Zero” and “Tai Chi Hero”.

Detective Dee and his famous mace

Kenny Lin Gengxin plays “Shatuo Zhong”, a prison doctor and the apprentice of Imperial Doctor Wang. Shatuo uses his medical skills to assist the young detective in cracking the case. Lin has appeared in several Chinese box office hits including “Sword Master”, “My Old Classmate”, “The Taking of Tiger Mountain”, “God of War”, “The Great Wall” and “Journey to the West: The Demons Strike Back”.

Popular South Korean actor, dancer, singer and model Kim Bum made his Chinese film debut as “Yuan Zhen”, who was once a handsome scholar before poison turned him into a reptilian, water-dwelling creature.

One of the most bankable of the recent crop of young Chinese movie and pop stars, Angelababy plays “Yin Ruiji”, considered the capital’s finest courtesan. Having made notable appearances in the movies “Tai Chi Zero”, “Tai Chi Hero”, and “Rise of the Legend”, Angelababy crossed over to the Hollywood blockbusters “Agent 47: Hitman” and “Independence Day: Resurgence”. She is married to her “League of Gods” co-star, the popular actor Huang Xiaoming.

Actress Carina Lau reprises her role from the first film as “Empress Wu Zetian”. In a long and varied career, she has starred in films such as “Armour of God”, “Days of Being Wild”, “Project A: Part 2”, “She Shoots Straight”, “The Banquet” and “Ashes of Time”. She is married to the star of “The Grandmaster”, Tony Leung Chiu-wai.

In China 665CE, Empress Wu Zetian and Emperor Gaozong jointly reign over the Middle Kingdom. During an epic sea battle with the rival Buyeo kingdom, the Tang navy is decimated by a giant and terrifying sea monster. Rumours abound in the Imperial Court that the legendary, Kraken-like “Sea Dragon” is at large. Empress Wu orders an investigation by Yuchi Zhenjin, head of the Da Lisi, an Imperial agency tasked with upholding law and order. He is given ten days to solve the mystery or lose his head.

Yuchi Zhenjin is at the centre of the action 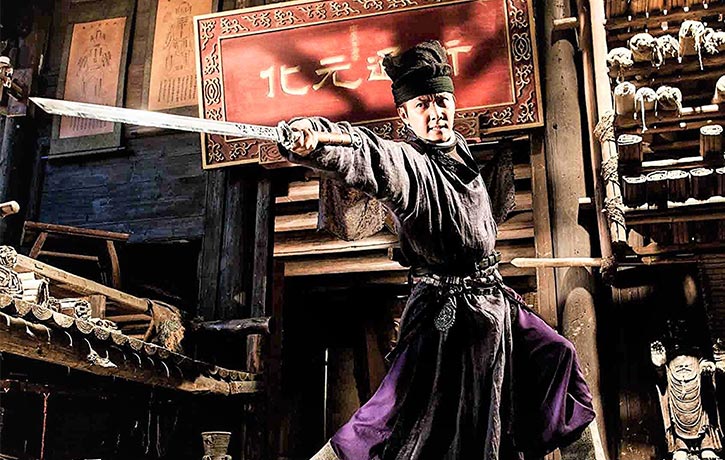 In the meantime, the youthful Dee Renjie, arrives in the capital to serve as a Da Lisi magistrate. Having foiled a kidnap attempt of Yin Ruiji, the capital’s most beautiful courtesan, Dee encounters a mysterious amphibian man from the Lotus Pond (as opposed to a Creature from the Black Lagoon)!

Dee uses his deductive reasoning to unravel clues that reveal there was more to the apparently straightforward kidnapping plot. Befriending Shatuo Zhong, a young and talented prison doctor, the two must combine their skills with the suspicious Yuchi Zhenjin to solve the mystery of the Sea Dragon and save the entire Imperial Court from a mysterious, parasitic poison.

The film opens in spectacular fashion with a huge fleet of Tang dynasty ships being attacked by a giant sea monster. Tsui Hark really has led the way in improving the quality of CGI effects so that Chinese blockbuster movies can rival their Western counterparts. The colourful action is bold and vivid, even though it takes place at night in a murky ocean.

The martial arts action kicks off with the plot to kidnap Yin Ruiji. Of course there is a lot of flying around on wires, but there are also some cool authentic kung fu moves beautifully captured, often in slow motion. Occasionally the damage of a strike is rendered close up a la “Dragon/Wu Xia”, although it stops short of X-ray vision.

Weapons fly out of the screen!

A veritable whirlwind of fights between our heroes and villains

The choreography and wirework often plays to the 3D gimmick. Interesting weapons such as throwing stars, a mace ball on a chain and even a flying bladed frisbee, as well as CGI bees and various bits of debris, fly out of the screen. Despite the emphasis on special effects, the fight choreography still manages to retain lots of recognisable Chinese martial arts moves. Midway through the film, Yuchi Zhenjin has a particularly satisfying duel with Doctor Wang Pu, that is a great example of balancing physics-defying wirework with special effects and entertaining swordplay. Yuchi Zhenjin is also at the centre of the action in a chase and fight through some giant paper lanterns. Here, the CGI is less convincing than in other scenes, and yet I still found the sequence enjoyable.

The martial arts action finale involves single swords, double swords and cudgels, which are utilised in a veritable whirlwind of fights between our heroes and villains. After a vertigo-inducing fight on a cliff face, the heroes head out to sea on a ship to finally face the giant aquatic monster.

Although I’ve only ever seen this film in 2D, it’s very apparent that it must have looked breathtaking in 3D. Unfortunately there is no 3D home release available, but having said that, the visuals are so outstanding that I would still consider buying the Blu-ray version over the DVD.

The performances of the main cast are generally very good. Mark Chao makes for a more genial Detective Dee than Andy Lau’s, and is all the more fun for it. I enjoyed many of the humorous asides and laughed out loud at an hilarious pay off during the end credits! The Sherlock-style deductions are also very entertaining. I particularly liked a scene where Dee uses his ingenious skills to suss out Shatuo Zhong’s background and win him over as an ally. The plot is slightly less convoluted than the first film and follows a straighter line through the many chases and skirmishes to its conclusion. This, coupled with some of the more juvenile jokes, would perhaps make this film slightly more accessible to younger audiences.

Whereas the pandering to 3D filming somewhat hampered some of the fighting in a film like “True Legend”, here it is doesn’t inhibit the choreography when watching it in two dimensions. Just as impressive as the special effects enhanced action scenes are the CGI rendered cityscapes, that are captured with the same kinetic, swirling camerawork. In fact the cinematography helps to maintain a constant energy throughout the film. At over two hours long, it does try to pack in many plot threads and heaps of flying, spinning action, which threatens to become tedious due to the length of the film. It just about gets away with it due to the sheer energy and breathless pace with which everything moves along.

If you enjoyed the first film and like fantasy films, this will undoubtedly entertain you. I have felt thoroughly entertained by both instalments in Tsui Hark’s series and look forward to seeing the third part, “Detective Dee: The Four Heavenly Kings”, when it’s released in Summer 2018!

There is a vertigo-inducing fight on a cliff face

Dee uses his ingenious skills to win over Shatuo Zhong

Seen this FU-tastic title, perhaps in 3D? What martial arts films from the past or present do you think should get the 3D treatment? Let us know in the comments below, join in the conversation and share this on Facebook and follow us on Twitter (Why not check out these other fascinating FU-flicks as well as these interviews?)