Taiwanese-American singer, actor and model Peter Ho plays “Yen Shisan”, an assassin. Ho has starred in over 25 films and television series, such as “Wind and Cloud”, the “Crouching Tiger, Hidden Dragon” television series, and “The Young Warriors”.

Jiang Yiyan stars as “Mu-Yung Chiu-Ti”. She is a graduate of the Beijing Film Academy appearing in several mainland television shows and movies. She is one of the main cast in the popular series of wuxia films “The Four”.

Ah Chi works as a dogsbody

Yen Shisan is a highly skilled, but terminally-ill assassin who is haunted by the destructive impact of his deadly talents. When he hears that the “Third Master” has died, he wanders the land seeking a new worthy opponent. At the same time, he searches for a good location for his grave.

Hsieh Shao-Feng is a master swordsman, weary of the bloodshed and violence he has experienced in the martial arts world. As the descendant of a legendary swordsman family, he jilts his betrothed, and seeks anonymity. Adopting the life of a vagrant, he takes the name of Ah Chi whilst working as a dogsbody in a brothel, hoping to quietly disappear.

The absence of a dominant sword master creates instability among the remaining sword clans. The violent pasts of the two sword masters inevitably cross, bringing them together to fight the clans for the greater good, but with a twist in the tale.

There is some great storytelling dialogue and performances

The film opens with a duel on a snow-covered bridge over a frozen river. The sinister Yen Shisan’s tattooed face resembles Brandon Lee’s The Crow, as he twirls and thrusts his sword in a whirlwind of CGI and wire-assisted effects. Although the choreography is uninspiring, it is a visually arresting opening, playing heavily to its 3D format.

The 3D tricks are even more evident in a Jianshu-style (wushu straight sword) fight with Mu-Yung Chiu-Ti. The flexible sword is frequently thrust out of the screen, as is the darting head of a snake.

When Yen Shisan takes on the might of the Hsieh Clan at the Supreme Sword Manor, it is reminiscent of the Gunshu/Cudgel scene in “The Matrix Reloaded”. He single-handedly fights off dozens of surrounding swordsmen with his own sword. Unfortunately, the fight is over almost as immediately as it began. 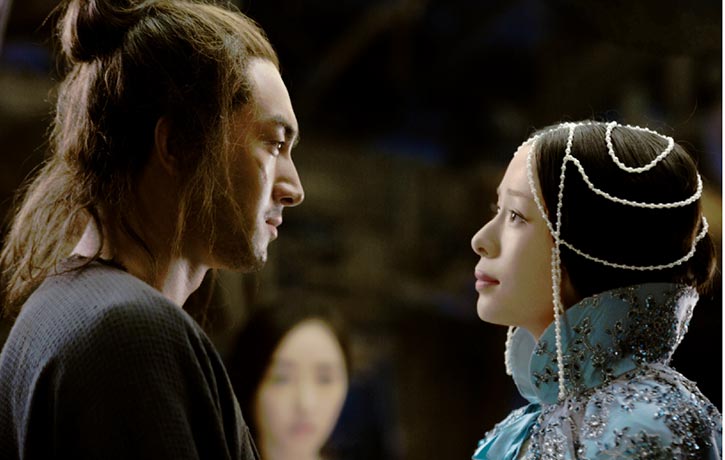 There are beautiful looking sets and costumes

For the action purists, the fighting improves somewhat when Yen Shisan visits the brothel. He uses pure sword work, with virtually no special effects, as he brutally dispatches everyone who stands before him.

When Yen Shisan and Ah Chi’s paths finally cross, Yen demonstrates his “13 Styles Sword Technique”. It begins as a graceful Jianshu routine but quickly descends into a supernatural fight as he applies his sword techniques to fight off what appears to be the smoke-like Dementors from the Harry Potter movies.

With Yen Shisan and Ah Chi, apparently absent in their dominance of the martial arts world, the Seven Stars clan take their opportunity to put down the Hsieh Clan once and for all. Beginning in a forest setting, the fighting is again dominated by lots of 3D objects flying out of the screen. It does redeem itself to some extent with the use of many of the classical weapons of Chinese martial arts, including the Pu Dao, Whip Chain, Axe, Hook Swords, Polearm, Spade, Spear, double and single-handed Broadswords and Straight Swords.

In terms of fight choreography, this is a movie that believes in saving the best for last. The final sword duel initiates with another Jianshu routine versus the Dementor-style spirits, but quickly grounds itself in a beautiful demonstration of sword applications. Much of it is in slow motion, giving every parry and counter-thrust a Tai Chi-like quality.

As one of Hong Kong’s most innovative film makers, producer Tsui Hark has embraced 3D film technology with verve in recent years. His films “Flying Swords of Dragon Gate”, “The Taking of Tiger Mountain”, and especially “Young Detective Dee: Rise of the Sea Dragon”, have seen him present some of the most stunning 3D visuals seen outside of Hollywood. So, it was with some surprise to learn that Derek Yee, known for his grittier works such as “One Night in Mongkok” or Jackie Chan’s “Shinjuku Incident”, was the director of this project.

The film certainly gets off to a brisk start, with several action scenes in the first fifteen minutes or so. There is then a massive gap of around thirty minutes before the next meaningful action scene. There is also an inexplicable and huge gulf between the beautiful looking sets and costumes, and some blatantly obvious and cheap-looking green screen locations in many of the scenes. The martial arts choreography by Yuen Bun and Dion Lam is certainly graceful, but mostly lacks innovation, often slavishly playing to it’s 3D format.

Director Derek Yee is known for his grittier works

Where this film succeeds however, possibly as well as I have ever seen, is it captures the heart, soul, romance and humour of classic wuxia novels through its storytelling, dialogue and performances. Many Chinese films tend to be very melodramatic (and there are those moments here too), but for the most part, this felt like a love letter to the wuxia novel, as opposed to movie, genre. Some of the dodgy green screen aside, it is often a visual feast, and features a wonderful music score from Peter Kam.

If you are after non-stop martial arts action, look elsewhere. However, if you enjoy classic Chinese tales of heroism and romance, “Sword Master” is right on the money!

Sword Master is available on April 10th via VOD and on DVD and Blu-ray. Get your pre-order copy now!

A classic Chinese tale of heroism and romance

Sword Master is right on the money