Home » Reviews » Movies » Into the Badlands: Season One

Into the Badlands: Season One

“What will the world look like after society as we know it collapses?” is a question that action filmmakers have been stepping up to answer since time immemorial. AMC’s gripping martial arts drama “Into the Badlands” is the latest entry in the post-apocalyptic genre, an action-packed, futuristic ode to “Journey to the West” that brings old school, Hong Kong-style kung fu back to the small screen, and judging by the first season in the badlands, it’s a very welcome return indeed!

Hong Kong star Daniel Wu steps into the role of the hardened anti-hero Sunny, an amoral killing machine who ever so gradually begins to regain little fragments of his humanity after a chance encounter with M.K., played by Aramis Knight, a young wanderer with a supernatural gift.

Sunny also quickly finds himself battling against the vicious warlord Quinn, played by Marton Csokas, along with the equally sinister Widow, played by Emily Beecham, who hopes to expand her conquest over the Badlands and gain control over M.K.’s metaphysical abilities.

M.K. begins to advance in his Colt training

Stephen Lang portrays Quinn’s ally Waldo, while Orla Brady and Sarah Bogler take on the roles of his former and current wives, Lydia and Jade, and Oliver Stark plays Quinn’s son and heir to his blood-soaked throne, Ryder. The Widow has an heiress of her own in the form of her daughter and personal assassin Tilda, played by Ally Ioannides, while Lydia’s father, the clerical leader Penrith, is played by Lance Henriksen. Madeleine Mantock rounds out the cast in the role of Sunny’s secret lover, Veil, while an assembly line of martial arts masters arrive to kick the series into high gear, including none other than MMA legend Cung Le!

In the distant future, the apocalypse has wiped out civilization as we know it. The territory once called the United States, now known as “The Badlands”, is ruled over by warlords known as “Barons”, who maintain rule over their individual territories with armies of trained warriors known as “Clippers”. After Baron Quinn’s most feared Clipper, Sunny rescues a young teenager named M.K. from a gang of marauders, he takes him under his wing as his “Colt”, a Clipper-in-training.

Searching through the Badlands we finally found Waldo

The Widow is eager to harness M.K

Veil conceals a secret that could bring danger

However, Sunny soon realizes that there’s more to M.K. than meets the eye when the young Colt exhibits a dark energy granting him supernatural abilities beyond his control. Sunny is equally intrigued by the pendant M.K. carries that could lead to Azra, the fabled paradise that supposedly exists outside of the Badlands. Sunny also learns that his secret lover Veil is pregnant, a serious taboo in the Badlands given that Clippers are forbidden from marriage and children. As Sunny begins to contemplate breaking out from under Quinn’s reins for the first time in his life, his problems are compounded by the scheming rival Baron known as The Widow, who seeks to expand her territory and sees M.K. as a potential weapon to bring down the other Barons.

By any objective measure, there simply isn’t a better action-centric show on television today than “Into the Badlands”. Before the opening credits even kick in, the first fight sequence of the series pilot plants its flag at the very peak of that mountain before folding its arms with a grin, inviting all other contenders to rise to the occasion.

M.K. is a stronger opponent than many realize

Quinn wont give up his newest Colt M.K

Colts are thrown into the pit to be transformed into warriors

Equally reassuring is how definitely the series makes clear that the days of action sequences being shredded within an inch of their lives to meet the censorship and editing requirements of basic cable are a distant memory as far as AMC is concerned. Lest we forget, this is the network that gave the world “The Walking Dead”, which similarly threw any notion of watering content down for televised acceptability out the window. I’m old enough to remember when a paper cut on an episode of “Power Rangers” was enough to spark Congressional hearings and networks dubbing over Chris Tucker’s potty mouth to have him say “I don’t give a fluke!” in televised broadcasts of “Money Talks”.

It’s said we all reach that phase of adulthood where you can’t help but feel like an old geezer compared to the younger generation, but that’s certainly a small price to pay if “Into the Badlands” is the messenger of that realization!

The fiendish Baron Quinn and the wheelchair-bound Waldo both prove formidable behind-the-scenes villains, but Emily Beecham’s portrayal of The Widow is easily one of the best femme fatales in ages. Like Sunny, her introductory fight sequence is out of this world in its insanity as she slices through her foes leaving you to pity television censors who now have to justify trimming down every bloodbath in “The Raid” film for televised acceptability!

So yes, one need not pencil in a trip “Into the Badlands” if the sight of blood causes any level of discomfort, but as with all things in life, the most important factor is finding balance and here the series leads the way with some of the best integrated wire-fu since 2010’s “True Legend”. As in that film, the use of wires not only feels appropriate to the world it establishes, but even more importantly, it doesn’t feel like an unnecessary distraction, precisely because the filmmakers have gone out of their way to make sure that the action never loses its power or ferocity.

When Sunny delivers a punishing spinning kick on his adversary or The Widow lawn mowers her way through a horde of enemies, you feel it every time, and the wire-assisted nature of the battles feel both believable and even a little necessary in the world of The Badlands where the wildly strength-enhancing abilities of M.K. can turn a simple kid into a god among insects. Even in the absence of Sunny’s and The Widow’s travails, M.K.’s story arch would make an engaging series all on its own, with his struggles to master his metaphysical prowess as well as progressing through the martial arts training an up-and-coming Colt must conquer.

The vicious Quinn is the most powerful Baron in the Badlands

A Clipper carries his kill count with him until death

M.K. questions the path Sunny has sent him on

The Widow sheds more blood than any other Baron

The finale of the sixth episode “Hand of Five Poisons”, also shows the long-term planning underway for the series and how cognizant it is to save the best for last. With Sunny and M.K. on the run from Quinn, they find themselves confronted by a trio of mysterious monks, played by Cung Le and stunt performers Mickey Facchinello and Morgan Benoit and in one fell swoop, the series kills two birds with one stone, enticing viewers to tune in for season two with a cliff-hanger ending while leaving the first season’s best fight sequence as a parting gift!

“Into the Badlands” represents the pinnacle of what an action-heavy martial arts adventure on the small screen can rise to, and single-handedly sets the standard for how to present kung fu on the tube. Daniel Wu’s portrayal of the wounded anti-hero Sunny is as strong a leading man as the series could have asked for, The Widow is the best villainess the world has seen in many moons (just watch how many cosplayers are going to do her proud in future Comic-Cons), and the show knows how to exactly make its wire-fu fit like a glove. For lovers of action, adventure and high-flying, quality kung fu, there’s simply no excuse not to venture “Into the Badlands”! 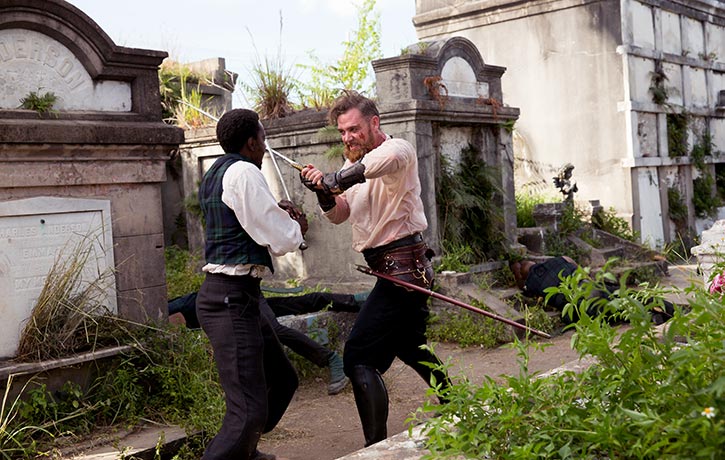 Quinn isnt above getting his hands dirty when needs must

M.K. has a new set of pursuers with a different agenda Thats Cung Le on the right

The Widows strongest assassin is her own daughter Tilda 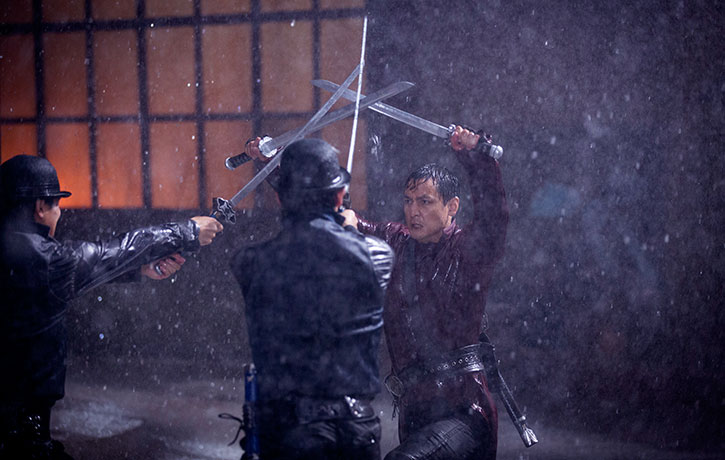 The Widow poses a formidable challenge to Sunny