The Man Without Fear is back for his darkest, bloodiest, and most exhilarating adventure yet with the arrival of the third season of “Daredevil”. Our hero’s name may derive from his predilection for acrobatics in spite of his blindness, but the title of his Netflix series may well now carry a double meaning – namely, for the show’s eagerness to consistently outdo itself season after season. And, with razor-sharp writing, absolutely dazzling action sequences, the return of old foes along with the arrival of new ones, and the best performance in the title role yet by its leading man, “Daredevil” Season Three does so without breaking a sweat!

Charlie Cox returns to the role of blind attorney Matt Murdock, along with once again assuming the mantle of his superheroic alter ego, Daredevil. Deborah Ann Woll and Elden Henson reprise their roles as Matt’s close friends and legal partners, Karen Page and Franklin “Foggy” Nelson, while Jay Ali steps into the role of FBI agent Rahul “Ray” Nadeem. Stephen Rider also appears as New York City’s district attorney Blake Tower, while Peter McRobbie is also back as Matt’s priest ally, Father Paul Lantom. Matt gains another close ally in the form of Sister Maggie Grace, a nun with a closer link to our hero than he initially realizes. Our hero will need all the help he can get, as he not only finds himself once again opposed by New York’s ruthless crime boss Wilson Fisk, aka “The Kingpin”, played by Vincent D’Onofrio, but also by his ice-cold mistress Vanessa, played by Ayelet Zurer, and his handpicked assassin Benjamin “Dex” Poindexter, better known to comic book lovers as “Bullseye”, played by Wilson Bethel.

Dex prepares for his next hit

His friends and fellow superheroes thought Daredevil was dead at the conclusion of “The Defenders”. However, the man the world knew publicly as Matt Murdock survived the building collapse that his friends thought had killed him, gets taken into the clandestine care of Matt’s priest, Father Lantom, who knows of Matt’s double life.

Although he is able to gradually mend his broken body and super-senses, with the aid of Father Lantom and the equally didactic Sister Maggie, Matt remains a broken man on the inside with even his devout Catholic faith now shaken. However, Matt gains a renewed sense of purpose after learning that the crime boss he helped put away, Wilson Fisk, has blackmailed half the FBI into downgrading his prison sentence to house arrest. With Fisk on the verge of regaining total freedom, Matt dons his original black garb once more to put a stop to the rise of The Kingpin. Unfortunately, something Matt didn’t count on was Fisk’s right hand man in the FBI, Special Agent Ben “Dex” Poindexter, who not only proves a formidable adversary in his own right, but one that swiftly manages to make Daredevil into public enemy number one.

Dex sets up Matt as public enemy number one

Matt holds his own even in civilian ID

Oh, where do we begin with this one? “Daredevil” has always proven itself to be the strongest of the Marvel-Netflix series, even surpassing the standards of many big screen superhero adventures. With its third season, however, “Daredevil” has now forever cemented itself as among the greatest live-action comic book adaptations ever made.

The popular trend in the superhero genre today is using a popular story arc associated with a given character as the basis for the story, and season three of “Daredevil” settles in on the “Born Again” arch, penned by comic book legend Frank Miller at the height of his run with the character. It’s certainly a fitting term to apply to the kind of hell Matt is put through during the course of the season, both mentally and physically.

His decision to return to the black ninja garb he wore throughout the bulk of season one proves to be quite emblematic of the source material season three draws from. This season is a true rebirth of Daredevil, bringing our hero to his lowest point and breaking him down to his barest essence while putting him to the test like he’s never experienced before, and he’s not alone in that regard.

Matt blends in to avoid suspicion 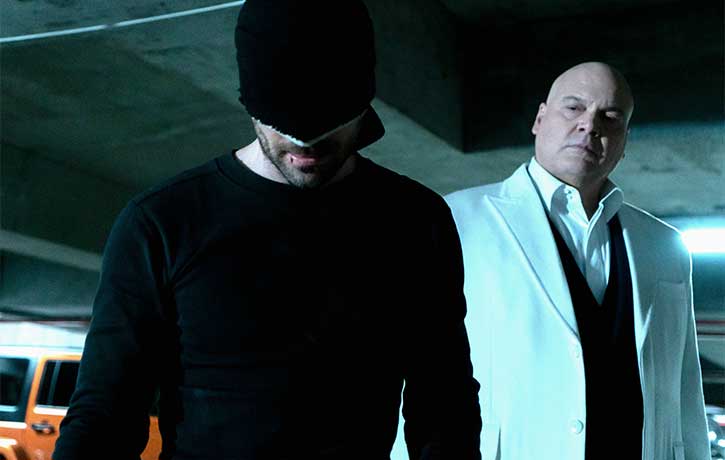 The tenth episode, aptly titled “Karen”, takes the viewer back in time to see the sordid activities and personal tragedies that brought Karen to her knees before we meet her in season one. Meanwhile, Foggy’s decision to run for District Attorney truly brings out the best in Matt’s close friend, while a series of key decisions on the part of Agent Nadeem bring out the worst in him. Of course, one of the greatest strengths of “Daredevil” has always been Vincent D’Onofrio’s performance as The Kingpin. While his appearance in season three is lighter on the murderous bursts of rage witnessed in the past two seasons, D’Onofrio again solidifies his rendition of Wilson Fisk as the MCU’s undisputed greatest villain. Long may he reign!

It goes without saying that season three’s action sequences are as spellbinding as ever, even putting to shame the action found in many of its big screen counterparts. The series blows the viewer away once again with its now staple single-take hallway fight, this time seeing Matt holding off enemies in a prison riot while battling the effects of a partial sedative injection. Clocking in at an astonishing 11 minutes and almost resembling a pro-wrestling match in its choreography, it’s genuinely hard to imagine what the makers of “Daredevil” could do to top their latest one-take hallway smackdown short of crafting an entire episode out of it.

Foggy and Karen thought their friend Matt was dead

Karen and Foggy try to persuade Matt to a different strategy

Matt gives the eulogy for a man who inspired many

However, what’s stunning about season three is how, for possibly the first time on the show, the action sequences elsewhere in the series are strong enough to rival its centerpiece action sequence. That’s certainly the case for Matt’s first hard-hitting encounter with Dex in the New York Bulletin, which combines the combat of a ninja movie with the suspense-filled tension of the “Predator” franchise. Clad in our hero’s red-horned attire to frame his killings on him, Dex doesn’t officially adopt the moniker of “Bullseye” during season three. Regardless, the series clearly makes you aware which member of Daredevil’s rogues’ gallery he is, with literally any inanimate object he lays his hands on becoming a lethal projectile that even Matt has difficulty dodging.

The final three episodes ramp up both the stakes and the action to levels seldom seen on the small screen before, finally bringing Matt into a three-way confrontation with Fisk and Dex that pushes the show to new heights of both brutal action and emotional power that’s sheer adrenalin. It’s definitely not an ending for the faint of heart, but it gives a kind of open-ended closure rarely seen in the superhero genre – one that conveys a richly satisfying feeling that The Man Without Fear has been, well…Born Again.

Agent Nadeem gets in too deep investigating The Kingpin

Karen saved from The Kingpins wrath in the nick of time

Thanks to The Kingpin Matts a marked man

Wilson Fisk manipulates his enemies as The Kingpin

With its third and best season to date, “Daredevil” cleans up once more as a superhero action series representing the absolute apex of what the genre can accomplish at its best. Charlie Cox gives his best portrayal of Daredevil yet, while Woll, Henson, Ali, and Bethel are equally captivating. Vincent D’Onfrio continues to reign supreme among supervillain performances. Meanwhile, the action sequences of “Daredevil” continue to set a new standard for martial arts action in the superhero genre, whether on the big or small screen. It’s genuinely amazing that “Daredevil” makes churning out thirteen episodes of comic book gold look this easy, but without a doubt, this is one series that really knows how to hit the Bullseye!

Sister Maggie comes to Matts aid in time of need

Agent Nadeem is determined to uphold the law

The Kingpin rages at Karen

Karen pushes to avoid the press

What are your impressions of “Daredevil” Season 3; how would you rate it next to the first two seasons and “The Defenders” especially in the fight stakes? Let us know in the comments below; Like, share and join in the conversation on Facebook and follow us on Twitter & Instagram. (DARE to click on for more FUflix and Thrills, including our thoughts on the first and second seasons of “Daredevil”, the recent “Iron Fist”, season two and our in-depth interview with series’ fight choreographer extraordinaire, Clayton Barber!)

Re-imagining of "Universal Soldier" in the works!