Jackie Chan’s classic, helter-skelter, kung-fu comedy classic, THE YOUNG MASTER restored from a 2K remaster, and beautifully-packaged as a 2-disc set, is available on eye-popping Blu-ray, from 88 Films and Amazon!

Chinese movie legend Shih Kien stars as local constable “Sang Kung”. In a career spanning over fifty years, he initially found fame as the villain in the classic black and white “Wong Fei Hung” films starring Kwan Tak-Hing. His villainous portrayals were so popular, they were often copied and he was known as “Villain Kien” or “Bad Man Kin” among Chinese movie-goers. He found worldwide recognition as the evil drug lord “Mr Han” in Bruce Lee’s seminal classic “Enter the Dragon”.

Korean actor and renowned Hapkido master, Hwang In-Shik stars as the deadly “Master Kam”. He featured opposite Angela Mao-Ying and Sammo Hung in the aptly-titled movie “Hapkido”, faced off against Bruce Lee in “Way of the Dragon”, and was also the villain in Jackie Chan’s “Dragon Lord”. 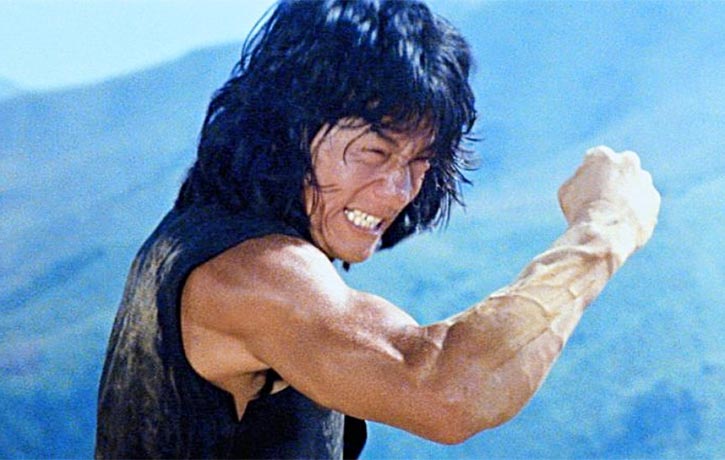 Dragon strikes with his fist of fury

Veteran actor Tien Feng, stars as the titular “Master Tien”. In a career spanning over forty years, he acted in or directed over 120 films. He is best known to martial arts fans for his roles in movies such as “King Boxer”, “Fist of Fury“, “The Fate of Lee Khan” and “Miracles”.

A product of the Shaw Brothers Acting School, Lily Li Lai Lai plays “Sang Kung’s Daughter”. She has appeared in many popular television serials and classic martial arts movies including “Come Drink With Me”, “The Wandering Swordsman”, “Executioners from Shaolin”, “The 8 Diagram Pole Fighter” and “Dreadnaught”.

Member of the legendary Venoms, Wei Pai stars as “Tiger”. In a long career he appeared in many popular kung fu films including “Last Hurrah for Chivalry“, “Five Deadly Venoms“, “Return to the 36th Chamber”, “Magnificent Butcher” and “The Prodigal Son“.

Two of kung fu cinema’s finest fighters Lee Hoi-Sang and Fung Hak-On team up as Master Kam’s lethal bodyguards. Lee Hoi-Sang is best known for his roles in “The 36th Chamber of Shaolin“, “Shaolin Challenges Ninja”, “The Incredible Kung Fu Master”, “Last Hurrah for Chivalry“, “The Prodigal Son“, “Project A“, “Shaolin and Wu Tang” and “Disciples of the 36th Chamber”, to name but a few. Fung Hak-On, has appeared or performed stunts in classic movies ranging from “The Boxer from Shantung” and “Iron Fisted Monk”, through to “Magnificent Butcher”, “Police Story” and “Kung Fu Hustle”.

Hwang In Shik as the dangerous criminal Master Kam

Orphans Dragon and Tiger are entered against a rival school in a Lion Dance competition by their Master.

Their school needs to win the prize money to remain open but their star performer, Tiger, is seemingly injured when he falls from a ladder, leaving Dragon to take his place.

The rival school wins the competition, but the truth emerges about Tiger’s betrayal and he is exiled in disgrace. However, Dragon vows to bring back his errant orphan brother so the pair can make amends to their Master.

During his quest for Tiger, Dragon is mistaken for a criminal known as The White Fan by local police chief Sang Kung along with his son and daughter. 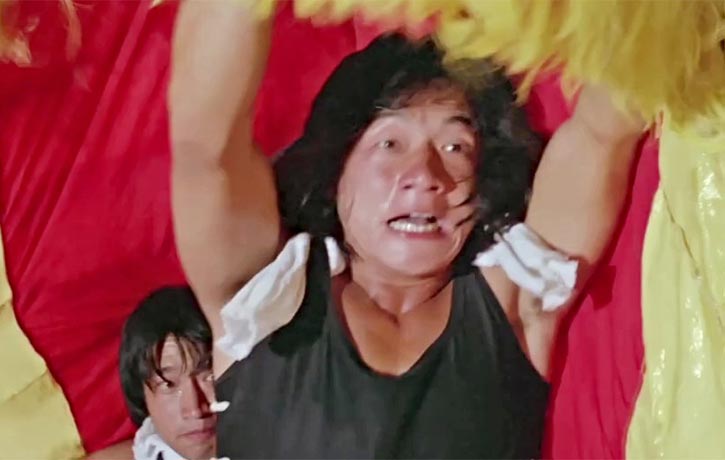 Meanwhile, Tiger collaborates with the rival school helping to free the dangerous criminal Master Kam from custody. Tiger is later implicated in a bank robbery. To clear his brother’s name, Dragon promises to apprehend the escaped criminal, Kam.

Our first taste of the action revolves around a lion dance competition. Jackie Chan and his fellow stunt players faithfully recreate some of the astonishing leaps and tricks that real competitive lion dancers perform. This being a Jackie Chan film though, there is always an added hazard or peril as he duels the rival lion.

The martial arts action kicks off in style with Jackie fighting Fan Mei-Sheng. Chan adds a stylish twist to the traditional kung fu moves by juggling a fan in between each move. An incredibly cool release and catch of the fan famously took 329 takes to capture on film!

Dragon vows to bring back his errant orphan brother

Whilst Jackie goes for flamboyance, our bad guys including Fung Hak-On, Lee Hoi-Sang and Hwang In Shik are lightning fast and merciless when Master Kam is sprung free from custody. It’s a remarkable sequence with the fighting taken much more seriously, setting up some formidable foes for Jackie to fight.

The more humour-driven choreography returns when Jackie is mistaken for one of the prison-breakers. He swaps fan-juggling for sword juggling, once again something you really only get in a Jackie Chan film.

Subsequently joining Jackie on screen is his acrobatic opera brother, Yuen Biao. Using a wooden bench, the pair flip and fight with truly astonishing agility. They really are masters of these types of scenes. The choreography is sublime and very, very entertaining

There are some classic comic moments

There is some beautifully played comedy with Shih Kien, who also gets to demonstrate some of his genuine martial arts ability. Being an elder statesman of Hong Kong cinema, he is doubled for some of the more ostentatious moves. Even so, Shih Kien still looks great striking many of the traditional kung fu postures and techniques himself.

Disguised as an old beggar, Jackie demonstrates the ingenuity that has become a trademark of his films. A horse’s hitching post becomes a gymnastics beam for Chan to fight, flip and fool around on.

Bring on the Cross-Dressing Bullfighter!

Looking like a cross-dressing bullfighter, Jackie dons a large red skirt, giving him an amusing way to hide and deliver his kicks with flair, as he swirls the skirt around him.

The final fight with Hwang In Shik must rank as one of the greatest old school kung fu finales. Filmed against the beautiful backdrop of the New Territories of Hong Kong, Jackie fights like a wild whirlwind.

Hwang Ing Shik’s Hapkido skills are more precise but delivered with an equal fury. The speed and rhythm of the choreography is breathtaking. It’s edited with a well-judged use of slow motion to really highlight many of the two stars’ fighting skills.

This is why men dont do the beam

The two discs contain the Hong Kong, Extended Export and International Export cuts of the film, along with just about every audio option you could ask for.

Special features include Audio Commentary from Brandon Bentley, Eastern Heroes’ very own Rick Baker on The Young Master, The Art of the Cut: Editing of The Young Master, reconstructed and previously unavailable Extended Fight Scenes, “The Cut Master” a collection of rare deleted, extended, and alternate footage, a short interview with star Jackie Chan, and a more extensive interview with Master Hwang In Shik, plus some of the outtakes and various trailers for good measure!

However, all the great packaging counts for nothing if the film is no good. Thankfully, “The Young Master” is a great example of Jackie Chan’s extraordinary physical abilities.

By the time Chan made this film, he had the firm foundation of his regular team of incredible stunt performers, enabling him to film some stunning action sequences.

Hwang In Shik has a stunning intro

This movie is perhaps the first example of the screen-fighting “language” that Jackie and his team became fluent in as they kick-started a golden era of eighties Hong Kong action films. Aside from the action, there are some great performances from Jackie’s co-stars, in particular Shih Kien, who delivers a wonderful comic turn.

Martial arts fans are living in somewhat of a new golden era with all these excellent Blu-ray releases of some truly classic action films, with yet more to arrive on the horizon. This deluxe edition of “The Young Master” is one of the best yet and should adorn the shelves of all self-respecting collectors of classic action films! 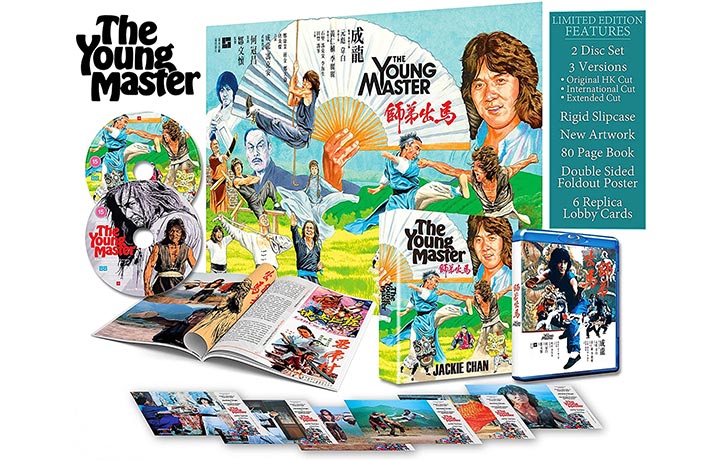 The Young Master – now on Blu-ray!

Order your Blu-ray copy of this frantic kung-fu Jackie Chan comedy classic THE YOUNG MASTER from 88 Films and Amazon!

Where does this title rank among your favourite Jackie Chan movies? Do you think this matches up to his previous outings; “Snake in the Eagle’s Shadow” or “Drunken Master”? Which other Jackie Chan classics have you been revisiting lately? Let us know in the comments below; Like, share and join in the conversation on Facebook and follow us on Twitter & Instagram!

ARE YOU A NEW YOUNG MASTER? FIND OUT IN THE FUniverse check out Jackie Chan’s Top 10 Fight Scenes, more Top 10’s, Top 5’s, exclusive interviews, develop your MASTERY in KFK wear and subscribe for more frantic, high-energy FU on YouTube!