Best known for his role as “Ernst Bodine” in the popular television series “True Detective”, actor and producer Alain Uy stars as “Danny”.

Actor, martial artist, director, stunt choreographer, and brother of Roger Yuan, Ron Yuan stars as “Hing”. Best known for his roles in the television shows “Sons of Anarchy”, “Prison Break”, and “CSI: NY”, Ron has also acted in numerous films, including Disney’s live-action adaptation of “Mulan”, “Drive”, “Kung Pow: Enter the Fist”, “Cradle 2 The Grave”, “Fast & Furious”, and “Blood and Bone”, to name but a few.

Mykel Shannon Jenkins stars as “Jim”. Having appeared in popular soap operas “General Hospital” and “The Bold and The Beautiful”, Mykel got to flex his physical talents as “Turbo”, ally to Scott Adkins’ Yuri Boyka in “Undisputed 3: Redemption”.

The Three Tigers will need to conquer old grudges

Best known as the Internet comedy sensation “Master Ken”, Matthew Page plays “Carter”. A black belt in both American kenpo and Okinawan kenpo karate, Matthew has featured in productions such as “Breaking Bad”, “Flock”, “Odd Thomas”, “Lone Survivor”, “Maze Runner: The Scorch Trials”, “The Space Between Us”, and “Waco”. 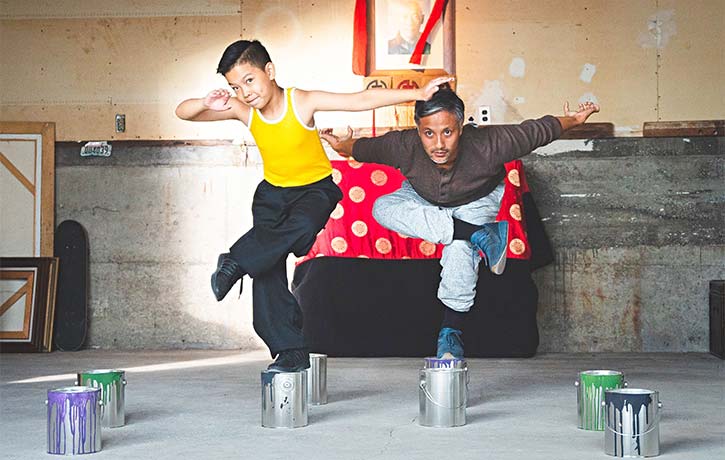 Father and son strike a pose

Matthew Page is hilarious but keeps it real as Carter

As teenagers, kung fu disciples Danny, Hing and Jim were inseparable. Fast forward thirty years, and each has grown into a washed-up middle-aged man seemingly one kick away from pulling a hamstring—and not at all preoccupied with thoughts of martial arts or childhood best friends.

When their old master is murdered the trio reunites. To avenge their sifu, the Three Tigers will need to conquer old grudges, the shortcomings of age, and a deadly martial arts hitman, if they are to honourably defend their master’s legacy.

The action opens rather eerily in the dimly lit alleyways of Seattle, with veteran action star Roger Yuan the victim of what looks like a deadly, ancient palm technique.

Flashback thirty years, and we see he was the martial arts teacher to three young boys. A very clever VHS video sequence presents us with a history of their growth into teenagers and beyond.

Occasionally humorous, it nonetheless reveals that the “Three Tigers” possess genuine martial arts skills, as a series of challenges and fights play out.

The now middle-aged and out-of-practice heroes reunite despite their differences, to take on three young upstarts who may know something about the circumstances behind their master’s demise.

I always believe a good kung fu comedy always respects the art and takes the fight choreography seriously. Playing on what happens when old age catches up with you (I sympathise whole-heartedly with our heroes!), the fighting action is nonetheless presented properly, with some decent techniques on display.

The youngsters fire off fast, acrobatic, flexible kicks, whilst the old-timers rely more on traditional techniques, wits, and grit. It not only keeps things entertaining, but also makes the stakes more authentic for the Three Tigers. 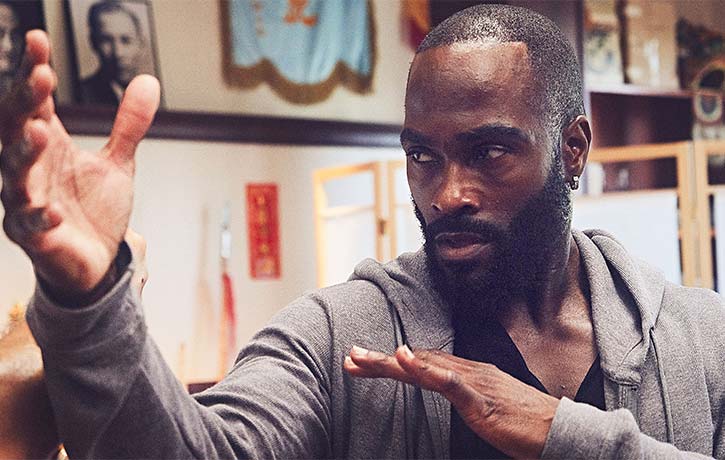 The Three Tigers face off with Carter, the victim of their youthful matches, played by Matthew Page of Master Ken fame.

This could have easily become a pale imitation of Page’s legendary Internet creation, but he creates something different, perfectly encapsulating the bruised ego of the former college jock looking for revenge.

This translates into the fighting, with Page keeping the techniques looking real whilst maintaining Carter’s swivel-eyed look of desire to finally beat his nemesis.

There is a genuine sense of danger for the finale, which is probably the best-filmed fight of the movie. Pertinent use of slow motion not only illustrates Danny’s recall of his kung fu skills, but allows the audience to see how each technique is being applied and countered.

“The Paper Tigers” is an engaging comedy with decent action, a witty script, and most importantly, heart.

The natural chemistry between the three leads is the engine that motors this movie along, much like Clarkson, Hammond and May in “Top Gear” or Alan, Phil and Stu in “The Hangover”.

Our heroes aren’t perfect, and they don’t always get along, but they look out for each other and somehow manage to do the right thing, even when they get things wrong.

The performances all round are excellent; funny, dramatic and touching, all as and when required. Matthew Page nearly steals the show as he manages to be hilarious and yet keep it real at the same time.

The fight scenes are very well put together, with the younger cast members performing some thrilling, gravity-defying acrobatics, whilst the majority of the fighting remains grounded.

For those of you lucky enough to be able to see this in a theatre, I imagine there will be much laughter and cheering from the audience as the heroes fight their various battles.

I’m glad in a way that this film was made independently and that Hollywood didn’t get to dilute it. At one point it was suggested that all the leads be white with Bruce Willis in the main role! “The Paper Tigers” deserves to be a success and I genuinely hope it will lead to their further adventures!

The old dogs face the young upstarts and their new tricks

BTS blocking out the fight with Mykel and Matt

“THE PAPER TIGERS” is out today, 7th May in theatres and on demand courtesy of Well Go USA!

Go from PAPER TIGER to a ROYAL BENGAL in the FUniverse of these Top 10’s, Top 5’s, deep-dive interviews, develop your majestic, martial skills in KFK WEAR, and subscribe for more unlikely heroes of FU on YouTube!