Remember the early 2000’s? That was a simpler time when wire-fu was all the rage, and practically all martial arts-laden action flicks were being retrofitted as a knock-off of “The Matrix”. Fifteen years after its initial release, “Bulletproof Monk” is one of the better wire-driven kung fu fantasies to emerge from this era, a kind of “Crouching Tiger Hidden Dragon” meets “Raiders of the Lost Ark” with a light sprinkle of teen comedy to add a little levity. It may not have left the kind of reverberating impact on popular culture the aforementioned timeless classics did, but nonetheless, it delivers a lively, if not terribly demanding, hour and forty minutes of bubblegum, wire-fu-driven entertainment.

Chow Yun-fat steps into the role of a nameless Tibetan monk tasked with guarding a scroll of infinite power from falling into the wrong hands, and who finds both a disciple and potential successor in a young American pickpocket named Kar, played by Seann William Scott. Jaime King tackles the role of Jade, a rich girl who prefers the company of a street gang, while Karel Roden portrays the villainous Strucker, a former Nazi soldier obsessed with claiming the scroll for himself. Victoria Smurfit also appears as his granddaughter, Nina, while Mako assumes the role of Mr. Kojima, the owner of the run-down “Golden Palace”, a Chinese movie theater where Kar lives and works as a projectionist.

Tibet, 1943. After fulfilling a series a prophecies, a nameless monk is chosen to become the new guardian of The Scroll of the Ultimate, an ancient manuscript capable of bestowing infinite power to anyone who reads it, and which could spell doom for the world if it were to fall into the wrong hands.

The monk soon finds himself forced to flee with the scroll after a cabal of Nazi soldiers attack the monastery under the leadership of Strucker, who is determined to unlock the power of the scroll. Sixty years later, the monk, seeking refuge in New York City, bumps into a pickpocket named Kar on a subway, with the latter swiping the scroll before being attacked by a subway gang for operating on their turf. As the monk returns to retrieve the scroll, he discovers that Kar is not only a talented, if largely self-taught, martial artist, but that while defending himself from the gang, he has seemingly fulfilled the first prophecy of the guardian of the scroll. After retrieving the scroll from Kar, the monk offers to help him harness his fighting skills, just as the henchmen of the still-alive Strucker (determined to claim the scroll once and for all) finally track the monk down.

The Monk is a master of the bo staff

If one can find any real fault with “The Matrix” and “Crouching Tiger, Hidden Dragon”, it’s that they were arguably a little too influential for their time. For years afterwards, it truly felt as if every movie theater on Earth was always playing no less than three or four action films that were heavily influenced by one or the other, from “Romeo Must Die” and “Cradle 2 the Grave” to “Exit Wounds” and the “Charlie’s Angels” movies. “Bulletproof Monk” has somewhat loftier goals in mind than most wire-fu martial arts films of that era, and clearly aspires to be a kind of “Crouching Tiger”-lite.

The casting of Seann William Scott might seem at face value like an attempt to pull in the “American Pie” and “Dude, Where’s My Car?” audience, but he’s a far better actor than he’s generally given credit for, and makes Kar, (who primarily honed his skills from imitating old martial arts films at the Golden Palace) a protagonist you truly feel like rooting for.

Chow Yun-fat is superb as the wise monk with No Name (his official name in the credits), with the film even working-in a quick homage to his gun-fu persona during a foot chase, and he and Scott have excellent chemistry riffing off each other in a partnership that’s equal parts buddy-cop and master-student.

The Monk trains Kar to harness his combat skills 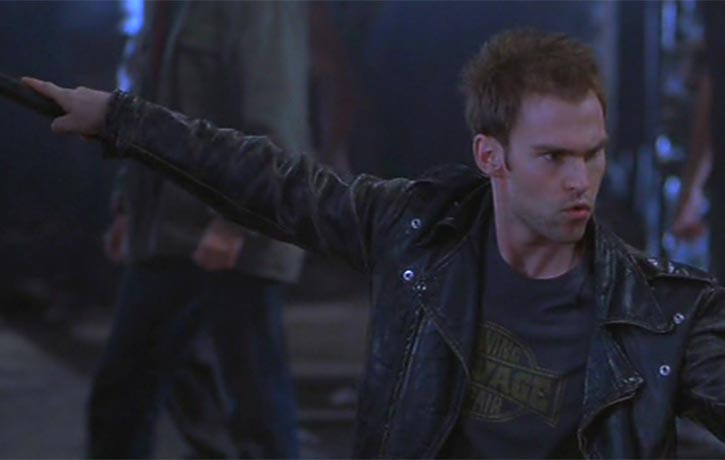 Kar wards off enemies with his bo staff

The Monk gets an aerial kick on Strucker

Scott appeared alongside Dwayne “The Rock” Johnson in “The Rundown” the very same year, and if his filmography for 2003 is an indication of anything, it’s of his talent for playing a wise-cracking sidekick alongside a genuine action star, while leaving a real impact with his own physical performance. While the villainous Strucker is probably the least developed character in the film, the chemistry of Chow and Scott more than makes up for its villain being a bit on the one-dimensional side (though to be fair, that’s a pretty common trait among movie Nazis).

While it probably won’t mark the point where anyone fell in love with the wuxia genre, the film’s wire-heavy martial arts action gives the audience their money’s worth. The opening fight on a rope bridge between the monk and his Tibetan master sets the tone for the gravity-defying combat the film has in store, though anyone who didn’t catch the film in 2003 would be advised to be a little forgiving towards the green screen work that hasn’t aged terribly well here.

The film has a lot fun in its training and fight sequences playing with the idea of such aerial-driven action, with the monk telling Kar straight up that the laws of gravity don’t exist “if you truly believe that they don’t” during a lively sparring session between the two. This also lays the groundwork for the film’s most hilarious scene, with Kar attempting to unlearn the laws of gravity in his efforts to ascend to the second floor window of Jade’s mansion. In a weird way, it kind of encompasses the overarching theme of the film of Kar overcoming his self-doubt as a warrior, with a side order of comic relief tossed in – much of that coming from his relationship with Jade, a more traditionally schooled fighter who kicks his butt one minute only to develop a begrudging attraction to him the next!

The Monk becomes the guardian of the Scroll of the Ultimate

Evil Nazi Strucker wants the powers of the scroll

Jade holds her own against Nina

Kar sweeps his enemy off his feet

Still, the high point of the film comes in the final showdown with Strucker – our villain now restored to his youth and granted increased strength after partially reading the scroll – gives the monk and Kar a real challenge to overcome. The film also pulls the rug out from under the audience with a solid twist on the prophecies of the scroll’s guardian, one that, looking back over the preceding ninety minutes, was laid out very cleverly indeed!

As a philosophical martial arts adventure with more comedy than most, “Bulletproof Monk” delivers an overall enjoyable diet of wire-fu. Chow and Scott have excellent chemistry together, the airborne martial arts sequences are consistently well-executed, with Scott and King clearly having trained tirelessly, and while the villain isn’t particularly memorable, the Zen-driven comedic banter between Chow and Scott more than makes up for it. If Chow and Scott decide to dip their toes back into kung fu waters, you’d be sure to applaud and welcome the prospect!

The Monk with no Name completes his training

Jade doesnt take lip from anyone

Struckers granddaughter Nina leads the hunt for the scroll

Looking back, 15 years after its first release, what did you think of “Bulletproof Monk”, what moments do you remember best? What other Hong Kong stars would you thrill to see team up with a fast-talking comedian? Let us know in the comments below; Like, share and join in the conversation with us on Facebook and follow us on Twitter & Instagram. (Are you an Urban Monk warrior? Then KFK’s FU-lletproof movie reviews are for you!)