Give a group of stunt performers a camera, tell them to go play, and “Unlucky Stars” is what they’ll come back with, an unabashed and thoroughly enjoyable love letter to 1980’s Hong Kong action films. Like the movies it pays tribute to, “Unlucky Stars” has a refreshing balance of blazing action, laugh-out-loud comedy, and wince inducing stunt work, as well as the plot device common to those films -setting several unrelated stories into motion and having them flow into one another by the final act.

In addition to his role as writer and director, Dennis Ruel steps into the lead of Josh Whitman, an out-of-work San Francisco native who joins the private investigator circuit with the help of veteran private eye Ken Champaco, played by Ken Quitugua. In the midst of their investigation are Peruvian action star Tomas De La Cruz, played by Jose Montesinos, his most devoted (and likely only) fan Sameer Yousef, played by Sari Sabella, and David Palatkinov, an aspiring stunt performer who just can’t land his big break played by Vlad Rimburg, who also serves as fight choreographer. Sam Hargrave serves in the villainous role of Sam, and veteran stunt performers Emmanuel Manzanares, Roy Chen, Steven Yu, Ed Kahana, Shawn Bernal and many others also appear in the film as an assortment of henchmen and tertiary bad guys.

Josh Whitman is new to the world of private investigation, but his fighting abilities are all the qualification private eye Ken Champaco needs to take him on as his new partner. Their latest case involves tracking down D-list Peruvian action star Tomas De La Cruz, who owes a sizeable amount of cash to local bookie/gangster Sam. Their mission is complicated when La Cruz’s obsessive fanboy, the mostly talentless would-be action star Sameer Yousef, and struggling stunt man David Palatkinov unwittingly step into the mix, and as all of their parallel stories begin to converge, Josh and Ken soon discover that this isn’t going to be the easy payday they were hoping for!

Whoa easy with the guns there bro

By the time the end credits for “Unlucky Stars” roll, you may very well feel like you’ve just been on an Easter Egg hunt. There are winks and nods to 1980’s Hong Kong flicks galore in this film, be it Golden Harvest Investigations, the Y. Kurata sushi bar, and everything in between, and if you couldn’t guess from the title, the film is heavily inspired by the “Lucky Stars” series featuring Jackie Chan, Sammo Hung, and Yuen Biao. Several action sequences and even elements of the character’s wardrobes are directly parallel to that much beloved series, and going further than that, it’s amazing how much Ruel, Quitugua, and Rimburg’s characters so perfectly parallel that inseparable triumvirate – Yuen Biao’s cool and collected mastermind (Quitugua), Jackie Chan’s down on his luck loser trying to make something of himself (Ruel), and Sammo Hung’s underdog whose husky frame is at odds with his powerful fighting skills (Rimburg).

Moreover, “Unlucky Stars” lifts another trope from the films it seeks to homage and handles it with absolutely impeccable skill – with several different groups of characters on what appear to be completely unrelated trajectories, the film interweaves their respective stories in such a way as to have them all converge in a kind of whirlpool of action in the final act. Like 80’s Hong Kong movies, the film is something of an anthology for its first hour or so, but pulls all of its characters and their individual arches together by the end in a way that feels organic and natural.

As for the journey towards that convergence at the end, you can rest assured that it’s nothing but fun. In addition to his role as David in the film, Rimburg also handles the role of fight choreographer. Prior to “Unlucky Stars”, he’d already built up a sizeable following online through some amazing short films showcasing his skills as an action director (his blood-soaked karate-themed short film “Osu” and his fan films of “Kung Fu Jungle” and “The Raid 2” are some of the best reasons to have a YouTube account), and it may be cliché to throw around accolades like “one of the best in the business”, but judging by his work here, it’s really hard to resist that urge.

Sams henchmen step up to bat

Sam wants his dough back now 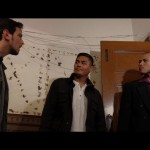 Josh wont quit until he gets some answers

This is exactly the kind of stunt work and martial arts action from this era of Hong Kong cinema that people fell in love with and passed along to one another like folklore, and like the rest of the film, it’s designed to directly homage films like “Wheels on Meals”, “Dragons Forever”, and of course, the “Lucky Stars” series.

The fight in the church is just one instance of this, and it must be said that Ruel’s kicking skills are truly something else here, especially his flying triple kick to take out three opponents that resembles one of Donnie Yen’s signature moves! The final act of the film, as mentioned before, is where all of the heroes and villains’ unrelated paths finally meet and become one. Beginning with Sameer’s entry onto a Celebrity Rehab-esque reality show, the film is pretty much wall-to-wall action for the final third, culminating in a final battle at a factory, and even working in a sadistic Mad Dog-esque torturer/henchman played by Shawn Bernal. If there’s any real complaint to be made, it’s that Bernal’s character is rather underutilized, but he’s is nonetheless fantastic in his role at the film’s climax. Like the films it pays tribute to, “Unlucky Stars” is very much a comedy, and a wince-filled one at that. The actors take some serious punishment that goes well beyond absorbing hits from each other, and involves falls, crashes, and collisions with non-padded surfaces. You don’t need them to tell you that that staircase they just back-flipped onto after being kicked in the face is made of metal!

Jackie Chan, Sammo Hung, Yuen Biao, and just about every other Hong Kong action star who broke out in the 80s would absolutely love “Unlucky Stars”, and anyone who grew up loving the films that made them all legends around the world will too. Just be sure to stick around through the end credits, and keeping your eyes peeled for some VERY unexpected cameos would be advisable, as well!

Its been a hard week for these guys

David and Sam duke it out

Booking Sameer to be a guest on the show