Documentary looking at Jackie Chan’s particular style of action and how he performs his stunts.

Although they are not named, The Jackie Chan Stunt Team get a lot of coverage here. Fans will recognise familiar faces from throughout Jackie Chan’s career including Ken Lo, Mars, Brad Allan and Andy Cheng.

There is some exclusive behind-the-scenes footage of the making of “Who Am I?”, featuring Ron Smoorenberg and Yung Kwan.

Originally released in 1999, “My Stunts” gave a real insight into the inner-workings of Jackie Chan and his legendary Stunt Team.

Beginning with a look at how stunts were performed in the older movies, Jackie demonstrates the importance of rhythm and timing with an impressive sword fight. Using an old-fashioned Shaw Brothers-style backlot, Jackie and his team show how they have developed their own language to time their fights safely and to perfection. A few secret techniques are revealed, including the use of wooden swords doubling for metal ones, how cough-mixture and food colouring can be used for blood, and how a bit of talcum powder, some clothes pegs and some thin wire attached to a wooden stool can make anyone’s kicks seem super-powerful!

Wooden swords are used for some scenes

The JC Stunt Team hanging around the Stunt Lab

Jackie is famous for using any given environment to it’s maximum potential in an action sequence. He reveals how something as simple as two walls of an alley can be used for an exciting and inventive escape.

The stunt team regularly train together to stay in peak condition, always ready for the next filming project. They often practice various stunts, flips and falls, even trying to invent new ways of presenting the action.

The film that really broke Jackie Chan out of the “traditional” kung fu genre, was 1985’s “Police Story”. Revisiting the original locations, Jackie reveals some fascinating insights into the making of some of the film’s action sequences, including the double-decker bus chase and the climactic fight in a shopping mall that almost got the movie called “Glass Story”!

Jackie’s latest hit film at the time “My Stunts” was made, was “Who Am I?”. Filmed in Malaysia, South Africa and the Netherlands, we get to see behind-the-scenes of some of the amazing car stunts, and how Jackie and his team put together the rooftop fight against Dutch martial artist, Ron Smoorenberg.

Jackie gives viewers an exclusive insight into his top secret Stunt Lab. In the Lab, Jackie and his team can safely experiment with various props, wires, stunts and fights.

The JC Stunt Team are experts at falling

The camera AND cameraman get covered in fake blood

The ABC of falling

Shooting a car stunt for Who Am I

The JC Stunt Team put together an impressive short action sequence. The footage is broken down step-by-step to show the differences between “NGs” (“no goods”) and good takes that can be used in a movie.

Finally, the viewer is treated to some exclusive behind-the-scenes footage into the making of what was Jackie’s latest project at the time, “Rush Hour”.

For a documentary about Jackie Chan, you would think clips from his vast body of work would provide the most impressive action scenes. In fact, this documentary does a great job of revealing some of the tricks-of-the-trade, whilst still impressing the viewer with the skill and agility of the stunt performers, including Jackie himself.

The first action sequence is classic old-school Jackie Chan, where he takes on numerous foes armed with Chinese broadswords. This is Jackie Chan we’re talking about here, and he doesn’t just merely defeat them, but disarms them and collects all their swords! In a couple of amusing scenes, Jackie manages to cover the camera and cameraman in fake blood, and even breaks the set climbing up a wall!

The stunt team often work out together and we get to see a great montage of their “A, B, C” of flips and falls and how they apply them to an action sequence. Watching them bounce and twist off various objects makes you wonder how they don’t spend all their time in their local casualty ward! 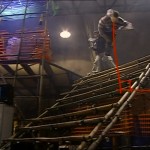 My Stunts reveals how the stuntmen perform the action

An early appearance in the film Hapkido

The film “Police Story” broke new ground with it’s mix of martial arts and stunts. Jackie casually hangs off the side of a double-decker bus as he explains how he used a specially made umbrella to perform the original stunt. He reveals that two of his stunt team were quite badly injured when a fall from the bus went wrong. The stuntmen were supposed to land on a parked car but, the bus braked erratically, and they fell from the top deck, head-first, onto the tarmac below. The footage was still used in the film! Jackie himself didn’t escape injury, revealing he received serious burns and a spinal injury when sliding down a pole during the film’s climax.

The 1998 film “Who Am I?” featured a classic end-of-film battle, with Jackie taking on Ron Smoorenberg and Yung Kwan in an entertaining rooftop fight. Here we get to see how Jackie looks at various ways of using the rooftop environment. Especially telling is Jackie’s emphasis on having the correct rhythm for the fight sequences, with sometimes two or three stuntmen performing the parts of the same character for one scene. We even get to see a false leg being used, where even Jackie himself sometimes gets the timing wrong, and gets hit in the face. The film also featured some impressive car stunts and we get to see a mix of genuine driving skills, and a little bit of movie magic to make the impossible happen, when a car spins around on it’s side.

In Jackie Chan’s Stunt Lab, his team get to shine, demonstrating their incredible abilities to “sell” a punch or kick. We see them crash through tables, fall off walls, and land on the roof of a car from a great height. There are various props in the lab used to varying effect. Who would have believed some old vinyl records, a shopping trolley and a fridge could be used to such a great effect in a fight?

The stunt team put together a short stunt sequence, led by Australian Wushu star Brad Allan. Allan’s skills are impressive and it is little wonder he was the first non-Asian full member of the JC Stunt Team. The sequence is slowed down, freeze-framed and shown from various angles, with a breakdown of what makes a good shot.

The Hollywood production of “Rush Hour” was being made at the same time as this documentary and we get to see Jackie applying some of his style of action into a mainstream American film.

Jackie Chan using a shopping trolley as a weapon

Jackie Chan using a car door as a weapon

Jackie adds his own unique style to a sword fight

How to land the perfect fall on a glass table

Even if you are already aware of how practical stunts are performed, there is still a lot to enjoy from this documentary.

The best revelations are things such as Jackie buying in expensive American kit to help his stuntmen, but they still prefer to use the “old ways”, of wires and apple boxes. Watching Jackie explain how the sequences in “Police Story” were made is informative and entertaining, and fans of that particular film will enjoy the trip down memory lane.

The look at Jackie Chan’s Stunt Lab gives away a couple of neat tricks using coins, and the stunt team are set a “challenge”, giving them a great opportunity to demonstrate their skills. Look out for long-serving stunt team member, Mars!

The action sequence breakdown at the end is a great way of demonstrating not only the stunt performer’s timing and accuracy, but also the way in which the camera can be positioned and used.

Whilst Jackie Chan’s “My Stunts” isn’t a “How to” instructional video, and doesn’t reveal all his secrets, it is nonetheless a very entertaining look at how Jackie Chan and his team work and is a must-see for fans Hong Kong action cinema.

Even two walls can be used in an innovative way

Behind the scenes of Rush Hour