The cast consists mainly of young, up and coming mainland actors.

The main special forces team is made up of Zhang Yi as “Yang Rui” team leader; Huang Jingyu as “Gu Shun”, a sniper; Du Jiang as “Xu Hong”, a demolitions specialist; Wang Yutian as “Zhang Tiande/Rocky”), squad machine-gunner; and

Jiang Luxia as “Tong Li”, a squad machine-gunner and the only female member.

Hai Qing plays “Xia Nan”, a French-Chinese journalist who gets caught up in the special forces operation.

Chinese actor Zhang Hanyu reprises his role from “Operation Mekong” as “Gao Gung”, who is now the commander of the Chinese fleet. Zhang hit the big time after his lead role in “Assembly” and has played notable roles in Donnie Yen’s “Special I.D.” and “Bodyguards and Assassins”.

There are also cameo appearances from popular actor Simon Yam as ” Albert”, a Chief Editor of a local Moroccan newspaper and Xia Nan’s boss, and Michelle Bai as one of the hostages. In a long and varied career, Yam has appeared in hit films such as Chow Yun Fat’s “Full Contact”, the first three instalments of the “Young and Dangerous” film series, “Dragon Squad”, “Naked Killer”, “SPL: Sha Po Lang”, “SPL 2: A Time for Consequences”, “Election 1 & 2”, “Ip Man 1 & 2” and “Bodyguards and Assassins”. Michelle Bai will be familiar to martial arts movie fans from her appearances in Andy Lau‘s “Shaolin”, Jackie Chan‘s “Chinese Zodiac” and Donnie Yen‘s “Kung Fu Killer”.

Bringing in the big guns

Very loosely based on the evacuation of 600 Chinese nationals from Yemen in 2015, “Operation Red Sea” follows the mission of the Jiaolong (Sea Dragon) Assault Team, a small unit of elite navy special forces soldiers. Their exceptional skills at taking out hostile forces with surgical precision are demonstrated when they rescue the crew of a merchant ship that has been hijacked by Somali pirates in the Red Sea.

When the civil war situation in the nation of Yewaire on the Arabian Peninsula becomes unstable, orders are given to evacuate local Chinese personnel and workers from the country. Given the unrest and threats from rebels and local terrorist groups, the Jiaolong Assault Team is assigned the task of evacuating the Chinese citizens to safety aboard the main Chinese naval vessels. Meanwhile, a French-Chinese journalist working in the area receives news that the local terrorist organisation, Zaka, are using the chaos of the civil unrest as cover to obtain materials from an energy plant that will enable them to make “dirty bombs”.

Heavily outnumbered and ambushed at every turn, the Jiaolong Assault Team must bring all their skills together to save the hostages, stop the terrorists, and get out alive. 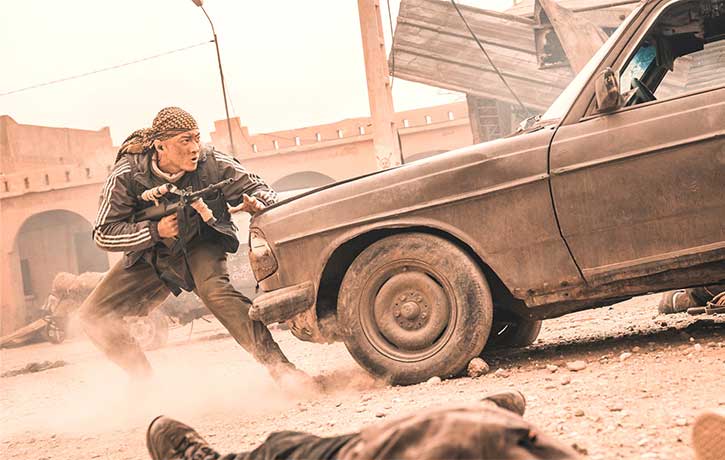 To call this film “action-packed” is a true understatement. In the opening minutes, Somali pirates hijack a Chinese cargo ship and an elite unit of Chinese SEALs are called in to rescue the crew who are being held as hostages. The film lays down a strong hand with a tense action scene that is as epic as anything similar in a Hollywood blockbuster. The initial assault is captured in vivid, high definition slow motion with CGI bullets piercing their targets. It builds to an exhilarating seaborne chase that plays out like a blend of the movie “Captain Philips” and a “Call of Duty” video game.

When the Zaka terrorists attack a convoy there are shades of “Black Hawk Down”, albeit a pulse-pounding hyperreal version. The elite special forces literally swing into action with their grappling hook and zip line gadgets.

The action is relentless as the team fight their way through the bullet and bomb riddled streets, buildings and rooftops. The adrenaline continuously pumps as the camera continually moves. Even when there are pauses between the gunfire and explosions there is a constant tension in the scenes of exposition and dialogue, even if it is a little clichéd. One particularly disturbing and quite graphic scene features a terrorist beheading. It makes for very uncomfortable viewing and will be a “look away from the screen” moment for many I’m sure.

As the action transitions into its final third, there is a continual ebb and flow of tense sniper battles, pulsating shootouts and earth-shaking explosions. It evolves into a desert tank battle the likes of which I have never witnessed before. It’s almost “Fast and the Furious” levels of insanity but bizarrely, there is something grounded about it. (Perhaps because it is all taken very seriously whilst somehow managing not to disappear up its own posterior?)

The final assault on the terrorists features a wing-suit jump straight out of a “Mission: Impossible” movie, followed by some limited hand-to-hand combat that keeps its feet firmly in the hard-hitting camp of stylish choreography.

This is a sequel to “Operation Mekong” only in that it is VERY loosely based on a real incident and has “Operation” in the title.

Its predecessor was a stylish starter of “Jason Bourne”, with an action-filled “Miami Vice” main course, and an overblown “Rambo” dessert. This is a full-on, raging hot chicken vindaloo version of “Black Hawk Down” from the opening minutes. “Wolf Warrior 2” was a pretty relentless action film. “Operation Red Sea” takes itself far more seriously but with a string of militaristic action sequences that almost make Wu Jing’s hit look restrained. It is guilty of doing the CGI sniper bullet one too many times, even though it is a pretty cool effect.

In the red trenches

The cinematography is mostly out of the top drawer, with sweeping aerial and tracking shots, although there is lots of Paul Greengrass-style shaky cam. Dante Lam is wise enough to frame most of the action wide so the viewer can still keep track when it gets frantic. Being a deliberately blockbusting film, it receives an appropriately epic music score to match. It rouses where appropriate and softens when required. The authentic-looking sets and locations also feel big budget. The acting performances are all perfectly adequate with just the occasional meander into melodrama. The simplistic dialogue and the “teamwork” nature of the action never really allow any one performance to really stand out. The focus is VERY much on the action set pieces.

For martial arts fans, there is pretty much zero hand-to-hand combat apart from Jiang Luxia’s bone-crunching fight during the movie’s finale. However, there is something about Chinese-made action films that still appeals. Chow Yun Fat’s movies with John Woo featured little or no martial arts, and yet they were still hits with many fans of Hong Kong cinema. The same applies here. There is something about the hyper-reality of Chinese stunt work combined with the rhythm of the action choreography that taps into the human psyche. One word of warning though; this film is not for the squeamish. The shootouts are hardcore and bloody, with many, many graphic scenes and lingering shots of dismembered limbs and body parts.

Not quite as jingoistic as “Wolf Warrior 2”, not quite as realistic as “Operation Mekong”, this sits somewhere in between. It’s certainly another calling card to the world that the Chinese movie industry is ready to deliver big budget, blockbusting action to rival anything that Hollywood produces.

Shoot ’em up action-movie adrenaline-junkies will lap this up. With two hours plus of non-stop hardcore action, I felt like I needed a lie down at the end! If they ever make a movie of “Call of Duty: Modern Warfare”, I would like to nominate Dante Lam for directing duties…

Cine Asia presents “Operation Red Sea” available now on Digital Download and Blu-ray & DVD from next Monday, 29th October. Seen “Operation Mekong” and “Wolf Warrior II”? Then you’re going to get all fired-up about Dante Lam’s full bore war assault on your senses that comes with mega gunFU battles as standard! Let us know your impressions in the comments below; Like, share and join in the conversation on Facebook and follow us on Twitter & Instagram. (Click your trigger-happy finger into the FUniverse for more blockbusting action!)

New Info on "The Raid" Remake!