Check out this exciting KFK EXCLUSIVE FIGHT SCENE PREMIERE, from the upcoming release of “JIU JITSU”, in Theatres, On Demand and Digital on 20th November 2020!

When Jake Barnes, a master Jiu Jitsu fighter, refuses to face Brax, an indomitable alien creature, the future of humanity hangs in the balance.

Injured and suffering from severe amnesia, Jake is captured by a military squad unequipped to fight the merciless intruder who has descended upon the planet. Jake is rescued by Wylie, and an ancient order of Jiu Jitsu fighters who must help him recover his memory and regain his strength in order to band together and defeat Brax in an epic battle that will determine the fate of mankind.

It’s been a long road to Jiu Jitsu. I wanted to create a new story in the martial arts genre that paid homage to the genre’s history and found a voice of its own. I was in my teens when I was working on getting my black belt in Tang Soo Do, then came “Enter the Dragon”, and out of nowhere this independent feature revolutionised independent action film and introduced martial arts to America!

Influence of Sci-Fi & The Day the Earth Stood Still

I also grew up with sci-fi, watching The Day the Earth Stood Still on TV, the concept of marrying both genres, had a big impact on me. This faceless alien that’s sitting in the middle of Washington DC waiting to decide the fate of the world. I thought it would be great to take that core idea from The Day the Earth Stood Still and inject those epic science fiction stakes into a martial arts film.

I noticed how the genres compliment each other, and mirror each other in some ways. The central ordinary character rising up against an unbeatable foe to save the day that you can see in Kickboxer, Alien, Rocky, Predator, and Enter the Dragon.

A Heroic but Flawed Lead puts His Life on the Line

The lead character is flawed but heroic, lives by his own code, and is willing to lay his life on the line for the greater good. This main character, along with his Jiu Jitsu crew, and those values have always appealed to me. I’ve always loved that simple story. The infinite ways it can be brought to life, and its ability to entertain and inspire audiences of all ages.

My hope is that the little girl and boy in all of us, who at one time or another in their lives has been bullied, can live through “Jake” our main character and ultimately win! In some ways, Jiu Jitsu as a martial art embodies that same story.

There is much which is disputed about the origins of Jiu Jitsu, but everyone agrees that the style has to do with learning how to use what you have to contend with in terms of an enemy, who may be bigger, stronger, or better equipped than you.

Frank Grillo has a close encounter

Where does Jiu Jitsu Come from Actually?

Also, Jiu Jitsu is a martial art with nebulous origins going back as far as 4,000 years. Some think from Japan, some say Korea, some say India, but nobody really knows for sure where it originated. It was created to help the villagers fend off invaders, using whatever they had available to them: weapons, positioning, leverage.

We tried to reflect that heritage in our story, while pushing further with some cinematic flash and opportunities to showcase the unique skills of our cast. Keep in mind that I prefer using authentic martial artists in Jiu Jitsu. The audience requires authenticity, and I feel that an Alain Moussi, being a 6th degree Jiu Jitsu master delivers that. Then we have Tony Jaa, who is a martial arts legend. Rounded out with JuJu Chan from Crouching Tiger Hidden Dragon II, and also Ryan Tarran, who plays Brax. And finally, Nicolas Cage who passionately embraces the genre and its place in Hollywood, delivers a performance that is not only enigmatic but spot on. 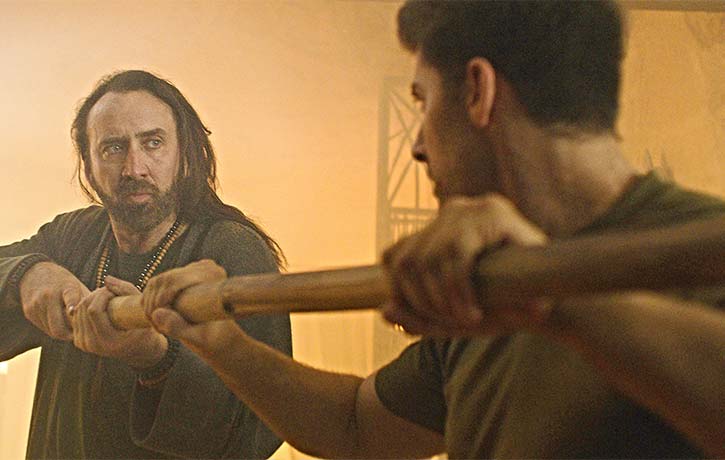 The future of humanity hangs in the balance

I didn’t realise until long after we completed the film that this is my first fully original story, from comic book to screenplay to film. I’m proud to introduce an original sci-fi martial arts property in to the canon. I hope this film brings a bit of joy, and a moment of escape not only in these challenging times, but for years to come!”

Stars of the Film say:

“We’ve got the most incredible team on “Jiu Jitsu”, from the Thai stunt team, to Madrax’s whole camera team, our incredible art department led by Salem, and of course Dimitri who always knows how to make me look great. I think everyone’s going to like what we put together here, and I know I can’t wait to see it on the screen myself. It was a dream come true working with Nicolas Cage and Tony Jaa. They are two people I have always looked up to in terms of acting, action, and martial arts, and this opportunity to work with them has been incredible.” 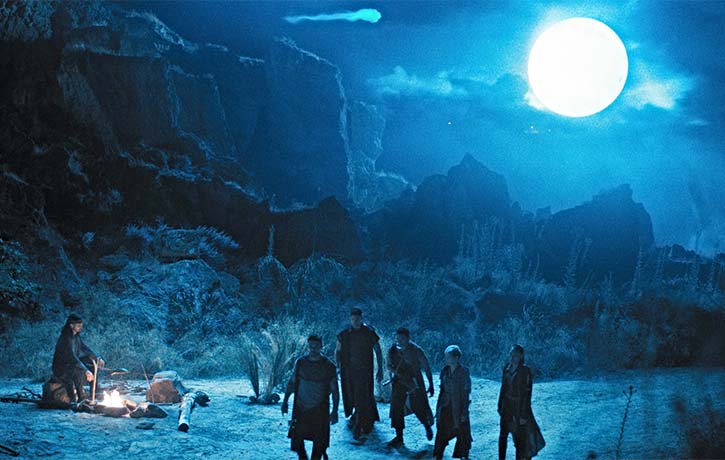 An ancient order of Jiu Jitsu fighters must save humanity

Jake is suffering with amnesia

“Alain is one of the nicest people I’ve ever worked with. That makes everything so much easier when you are trying to learn your moves. I feel safe working with him, so that was great. I thought we had a terrific scene together. I saw a lot of emotion and charisma in his eyes, and I think we have some good scenes together in terms of the performance.

Dimitri had the added factor of being an actor himself. So that was fun to work with him and I was delighted that we were going to do something that was really far out, combining martial arts with aliens. I like the idea of not repeating myself and putting myself in different situations in film and hopefully bring something a little bit unique.

Star of The 100 Marie Avgeropoulos gets in on the action

Dimitri was terrific with the character development as well and we talked a lot about that. Now, in Primal, I was playing someone inspired by Bogart in African Queen, but with Dimitri I was trying to channel a little Dennis Hopper. I love him so much in Apocalypse Now. It’s always great to work with directors who allow you to celebrate your heroes.”

“I got mad respect for Alain Moussi. Not only one of the most talented martial artists I’ve ever seen, but a great dude. His star’s on the rise.”

“JIU JITSU”, is coming to Theatres, On Demand and Digital on 20th November 2020!

You KNOW KUNG FU but do you KNOW JIU JITSU? Enter the FU-niverse and grapple with our Top 5 MMA series, Top 10’s, exclusive interviews, get your GROUND GAME ON in KFK gear and subscribe for all types of OUT OF THIS WORLD GROUND & POUND action on YouTube!