After getting a decent update with 2016’s “Kickboxer: Vengeance”, the 1989 cult classic “Kickboxer” has finally found its most worthy successor to the Nuk Soo Kow throne yet with that reboot’s sequel, “Kickboxer: Retaliation”. With an almost ceaseless barrage of Muay Thai battles and plenty of new blood injecting into its warrior stable, including a sword-wielding Highlander, a former world heavyweight boxing champion, and a villain almost literally capable of moving mountains, “Kickboxer: Retaliation” delivers all the head-kicking fun that fans of the series are after, and like the much beloved song-and-dance number of the original, will leave them “feeling so good today”!

As in “Vengeance”, several real-life MMA fighters appear in the film, including Renato “Babalu” Sobral, Fabricio Werdum, Roy Nelson, Wanderlei Silva, along with other champion athletes like kickboxer Rico Verhoeven, Brazilian soccer star Ronaldinho, and world class strongman Brian Shaw. Capping off the cast is towering Icelandic super-strongman Hapthor Björnsson in the role of the fearsome Mongkut – although his exceptionally appropriate nickname of “Thor” would’ve made an equally valid name for the main heavy of “Retaliation”. 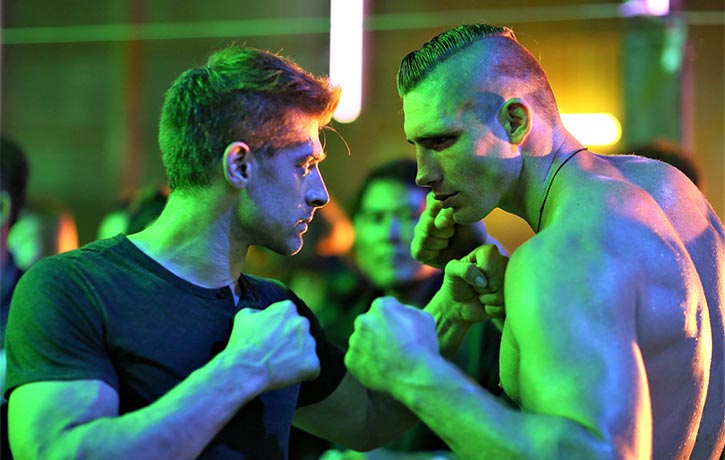 One year after avenging the murder of his brother Eric, Kurt Sloane has married his Thai girlfriend Liu and gone on to compete professionally in the world of MMA, where he remains undefeated.

Following his latest victory however, he finds himself confronted by federal agents looking into the death of ‘Tong Po’ at Kurt’s hands. However, Kurt soon learns that they are actually henchmen of the vicious Bangkok-based mob boss, Thomas Moore. Seeing dollar signs after Kurt’s defeat of Tong Po, Moore has Kurt thrown into a Bangkok prison with the promise of freedom on the condition that Kurt fight the towering, sadistic muscle monster ‘Mongkut’. To further incentivize Kurt to agree to the fight, Moore has Liu kidnapped and Kurt’s Muay Thai mentor Durand blinded and thrown in prison alongside him. With no other way out but to play Moore’s game, Kurt sets about training for the fight with the help of Durand and imprisoned boxing champion, Briggs.

Briggs and Durand must prepare Kurt to battle Mongkut

Right off the bat, you can sense that “Retaliation” is a considerably more self-assured film than its predecessor. Even with the legacy of the original “Kickboxer” and the franchise it spawned under its wings, “Vengeance” came with a certain modesty, indeed, perhaps for that very reason. “Retaliation” wastes no time in getting things rolling, literally, with Kurt taking on a gang of thugs aboard a speeding train, and yet, despite kicking the action off much more quickly, “Retaliation” is also an overall better-paced film that builds to its climactic battle with a better sense of how to not only maintain but also control its momentum. Where “Vengeance” seemingly couldn’t wait to get Kurt in the ring with Tong Po, “Retaliation” lets the impending showdown with Mongkut build up over a more sustained arc, which makes the payoff that much more satisfying when it arrives. The film also turns the fight with Mongkut into an ordeal from which the audience wants Kurt to emerge victorious from with as much fist-pumping vigor as they were rooting for him to vanquish Tong Po.

Mongkut is ready to devour all challengers

Kurt trains for the fight with some monks

Without giving too much away, the film recognizes that this is a fight that Kurt is being coerced into and at just the right opportunity, “Retaliation” gives Kurt the perfect incentive to actually WANT to step into the ring and kick Mongkut’s face in.

At least three-quarters of the running time of “Retaliation” consists of either fighting or training sequences, and Alain Moussi is as nimble and durable a leading man as the film could possibly ask for. He wears the role of Kurt Sloane well enough and glides across the screen with the ease of an elite athlete half his size. And dios mio, does the film call upon him to take as good as he gives!

Kurt steps into an underground fight in Bangkok

While Kurt largely walks all over Moore’s underlings, particularly in two very well-orchestrated one-shot brawls as well as in a hall-of-mirrors battle that harkens back to “Enter the Dragon” (second one in a year, no less), he finds himself getting pounded like a sack of raw meat in the training leading up to the fight with Mongkut.

Moore has big plans for Kurt 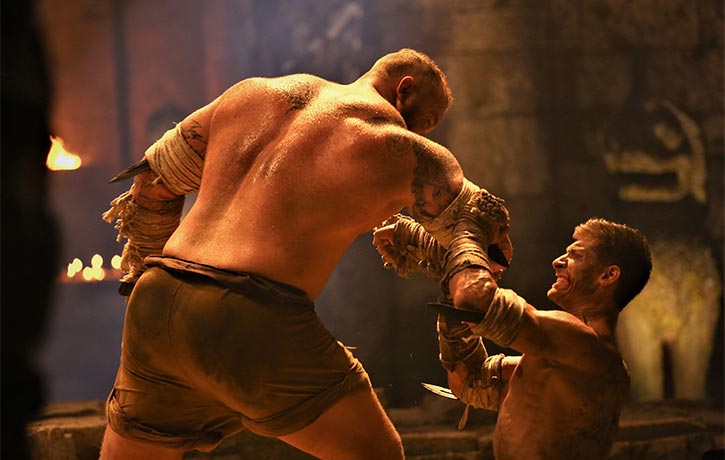 Kurt and Mongkut in their titanic end clash

Following his show-stealing cameo in 2009’s “The Hangover” and later going toe-to-toe with Donnie Yen in “Ip Man 3“, Mike Tyson has seemingly found a new career as a secondary heavy in martial arts films. In the role of Briggs, he most certainly puts Kurt through the ringer after the latter “interrupts my meditation”! Briggs ultimately ends up being just as much of a mentor to Kurt as Durand, which itself leads to a brief but fun skirmish between the two.

A noticeably leaner Jean-Claude Van Damme is right at home once more as the always stoic Durand, a man far too grizzled and hard-boiled to see his newfound blindness as granting him anything less than a tactical advantage with his enhanced ability to dodge incoming strikes almost before they’re even delivered. Even with a crustiness on par with Daredevil’s ‘Stick’, Durand is still clearly, deeply concerned for his student’s well-being, a concern that proves well justified when Kurt finally steps into the ring with Mongkut. To call their final smackdown, which takes up perhaps one-fifth of the film’s total running time, brutal would be one hell of an understatement. Lesser men have been sent to the grave by half the punishment Kurt absorbs at the hands of an enemy who makes Tong Po look like Ernest P. Worrell. Still, they don’t call Kurt Sloane a Nuk Soo Kow (“White Warrior”) for nothing!

In just about every metric, “Kickboxer: Retaliation” tops its predecessor and earns its place of honor in the “Kickboxer” franchise. Alain Moussi carries the film with a combination of outstanding martial arts skills coupled with inhuman endurance and a genuinely incredible high-pain threshold, whilst the film delivers its powerful fight sequences and training montages at a continuous yet controlled pace. A fist-smashing, adrenaline-injected, action-packed beatdown, “Retaliation” is the best “Kickboxer” since the original!

What are your thoughts on the “Kickboxer” movies? Let us know in the comments below, feel free to join in the conversation on Facebook and follow us on Twitter. And don’t forget to check out our previous movie reviews too!