Alien invasion movies are tough to pull off, but clearly, nobody told that to the “Beyond Skyline” crew. The sequel to 2010’s “Skyline”, the film blends outstanding visual effects and 8-feet tall extra-terrestrial warriors with the wall-smashing, blade-spinning martial arts action of “The Raid” movies to create a truly one of a kind first contact sci-fi action thriller!

Frank Grillo takes the lead as hard-boiled LAPD detective Mark, who finds himself inexplicably battling an alien invasion alongside Southeast Asian rebels led by the battle-hardened Sua, played by Iko Uwais. Jonny Weston portrays Mark’s rebellious son Trent, while Pamelyn Chee portrays Sua’s sister and fellow rebel Kanya, and Bojana Novakovic assumes the role of Mark’s confidant, Audrey. Callan Mulvey steps into the role of the rebel’s scientist ally, Harper, while Yayan ‘Mad Dog’ Ruhian portrays a local police chief causing trouble for Sua and the rebels in the midst of the invasion. Valentine Payen plays Rose, a young girl whose first-hand exposure to the alien menace mutates her body in a way that proves advantageous to the human resistance.

Iko as Sua in the midst of war!

Grizzled LAPD Detective Mark, is plenty annoyed with having to bail his ne’er do well son Trent out of his latest violation of the law, but this quickly proves to be the least of their concerns with the sudden arrival of a race of invading aliens in the night sky.

Hundreds of people are hypnotically blue-beamed into the visitor’s spacecraft, and despite their efforts to escape the city, Mark, Trent, and a small group of survivors find themselves abducted as well. The group’s efforts to escape the alien spacecraft ultimately results in the ship crashing into the jungles of Laos, where they encounter a human resistance band. This is led by local rebels, Sua and Kanya, who battle the duel threats of the alien invaders and the nation’s law enforcement that has used the invasion as an opportunity to crack down on the local populace.

Blending different genres into one film is a cool concept, in theory. But it becomes much more of a tightrope act in execution when the more divergent concept being incorporated is from the other. If you doubt it, just watch any horror-comedy to see how hard it is to be funny and scary at the same time. Christophe Gans’ “Brotherhood of the Wolf” did one of the most unprecedented genre-bending acts to date in injecting martial arts action into both a monster movie and a French historical drama, and “Beyond Skyline” pursues a similarly unique premise in merging martial arts with an alien invasion movie – and pulls it off without breaking a sweat! One of the biggest factors in the film’s success is that writer and director Liam O’Donnell clearly understands that alien invasions are at their best when balancing the macro with the micro.

“Beyond Skyline” presents us with humans beamed into hovering spacecrafts by the hundreds, towering extra-terrestrial soldiers waging war on humanity with the brains of abducted humans embedded into their skulls, and twenty-story alien mech-suits jumping in to sweep up humans who’ve managed to escape their tractor beams. Yet at its core, the film is a simple survival story of a father’s single-minded mission to rescue his son and joining forces with a handful of his fellow humans to stand their ground. Like “Independence Day” before it, “Beyond Skyline” has a keen awareness of how to interweave complexity with simplicity, and how to do so in a way that feels organic and consistent within the premise it establishes.

Iko Uwais and Yayan Ruhian don’t appear until the midpoint of the film, and the latter is a bit more of a background character, but rest assured it’s well worth the wait. While Iko and Yayan (along with Cecep Arif Rahman, their co-star from “The Raid 2”) were severely underutilized in 2015’s otherwise terrific “Star Wars: The Force Awakens“, “Beyond Skyline” wastes no time in letting them break out their Silat skills the moment the ship crashes in Laos.

Sua’s distrust of the local police in the wake of the invasion also briefly pits him against Mark, and at no point does the film feel like it’s taking a detour from the larger conflict when the human characters find themselves battling each other. Mark and Sua end up with an almost buddy-cop-like chemistry, and Frank Grillo brings the same gruff anti-hero charisma from his roles in the “The Purge” series, which plays well off of Iko’s anti-authoritarian freedom-fighter. 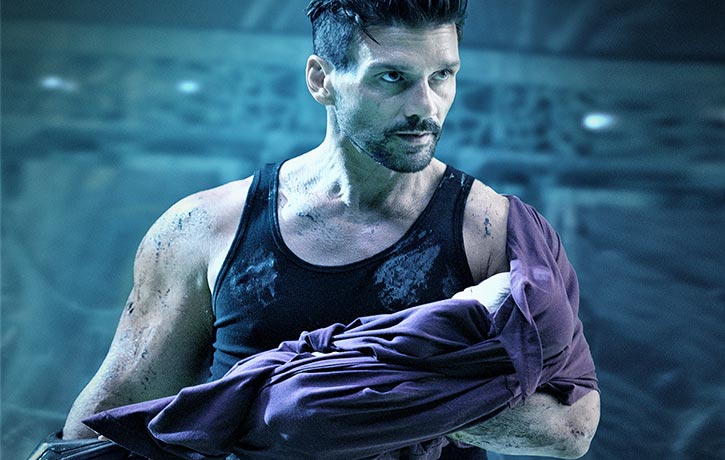 Getting used to new arms

The spaceship has crash landed

As cliché as it sounds, the finale of the film is truly something you’ve never seen before – Mark, Sua, and their motley crew in a martial arts battle against hulking alien invaders in the grounds of an epic ancient temple, resembling Cambodia’s famed Angkor Wat. Armed with blades of both human and alien-making, our heroes kick and slice through some refreshingly non-CGI extra-terrestrial opponents, with Yayan recalling the unstoppable ferocity of his ‘Mad Dog’ role (in more ways than one), and Iko snagging the best line of the movie after a particularly memorable alien vanquishing moment.

Adding more fuel to that fire are the efforts of the human survivors to release the minds of the abducted humans from the control of their alien overlords, while two alien soldiers, one of whom has broken free from his mental coercion, slug it out in two colossal mech-suits “Pacific Rim”-style. You literally could not ask for more from an alien invasion-martial arts thriller!

Iko as Sua shows off some cool silat moves

Whats a shotgun gonna do

Striving to succeed as both a sci-fi thriller and a martial-action flick, “Beyond Skyline” absolutely nails both. The visual effects, both CGI and practical are consistently impressive, especially the alien suits and spacecraft interiors. The scope is at once convincingly huge and intimate, and cinema’s foremost experts of Silat kick intergalactic butt in breathtaking and genuinely unique action sequences. With action, aliens and martial arts galore, “Beyond Skyline” is beyond electrifying!

“Beyond Skyline” opens in U.K. and U.S. theatres and will be available via iTunes, Amazon and VOD this Friday 15th December while DVD/Blu-ray releases on 8th January 2018. Share your thoughts on the movie in the comments below, join in the conversation on Facebook and follow us on Twitter (Love kung fu? Then check out our previous movie reviews!)