Few filmmakers can boast as impressive a winning streak with such a small body of work as director Ryan Coogler. After kicking off strong with 2013’s “Fruitvale Station”, Coogler’s 2015 outing “Creed” took the “Rocky” franchise to a level of greatness not seen since the original. With “Black Panther”, Coogler delivers an effects-laden, action-packed adventure that’s equal parts James Bond and Hamlet, and truly one of the most unique superhero movies in years!

Chadwick Boseman ascends to the throne of Wakanda in the role of King T’Challa, aka “Black Panther”, reprising the role from 2016’s “Captain America: Civil War“. Michael B. Jordan steps into the role of the malevolent albeit curiously altruistic villain Erik “Killmonger” Stevens, and just about steals the show with by far one of the best villainous performances in the Marvel Cinematic Universe to date. 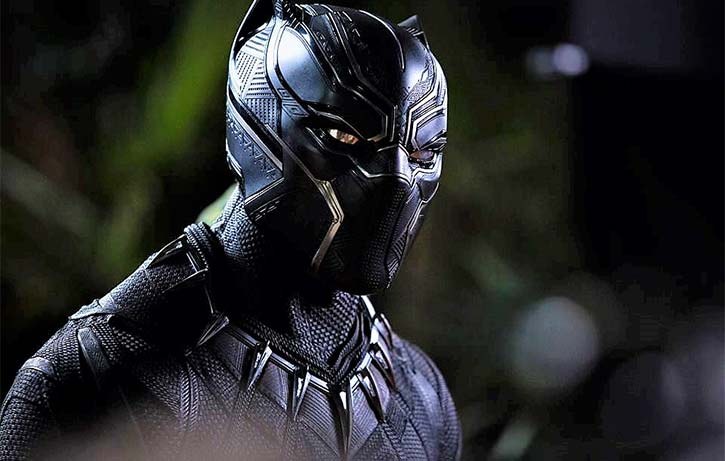 TChalla is ready to defend his people as the Black Panther

Shuri prepares to blast off

TChalla returns to Wakanda from his latest mission

To the outside world, the highly-reclusive African nation of Wakanda is little more than a Third-World Country. In reality, Wakanda is a technological marvel light years ahead of the rest of the world, having built its economy and infrastructure on its immense supply of the highly durable metal “Vibranium”. Following the death of his father T’Chaka in the events of “Captain America: Civil War”, Prince T’Challa ascends to the throne of Wakanda’s King, and with it assumes the role of the mythic superhuman protector, “Black Panther”. As T’Challa, alongside his close ally Okoye and ex-lover Nakia, attempts to track down arms-dealer Ulysses Klaue, the new king finds his throne challenged by the arrival of Erik “Killmonger” Stevens, an American former black ops soldier with a hidden connection to Wakanda, who has his own plans for the nation’s vast technological advancements.

The Dora Milaje get on the defensive

TChalla knows Killmonger is up to no good

Its not exactly a ground-breaking pronouncement to make to say that superhero movies have come a long way in the 21st century, but with its predominantly black cast, “Black Panther” most certainly heralds a major quantum leap for black-led films within the genre. One need only look back at 1997’s fascinatingly terrible “Steel” for proof of this; ponder the fact that “Batman and Robin” was arguably NOT the worst comic book movie of 1997 – a very sobering thought for us fanboys and girls, indeed.

For “Black Panther”, director Ryan Coogler makes the audience feel they’ve truly been brought into another world with the film’s Afrofuturistic creation of Wakanda, and consistently delivers some of the out-and-out coolest superhero tech yet. T’Challa’s method of suiting up is certainly an eye-popper. The film also boasts the first baddie to challenge Vincent D’Onofrio’s portrayal of The Kingpin for the throne of the MCU’s greatest villain in the form of Killmonger. 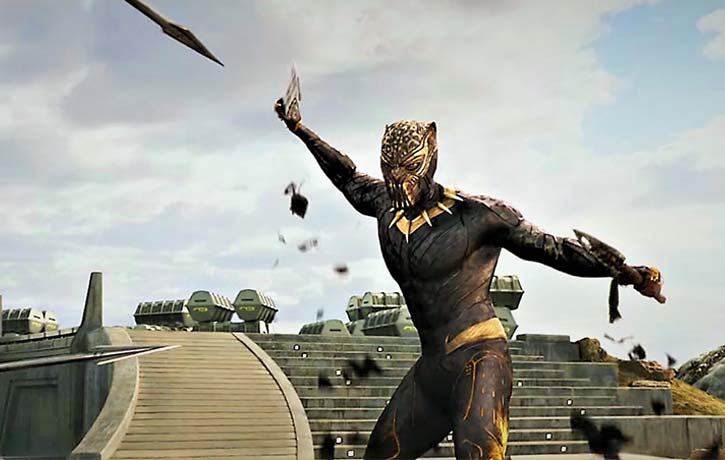 TChalla and Killmonger face off

The film boasts certainly nothing but excellent performances, especially from Chadwick Boseman’s return as T’Challa and Danai Gurira’s portrayal of badass warrior woman Okoye. However, Michael B. Jordan’s performance as Killmonger, a sharp 180 degree-turn from his equally memorable role in “Creed”, lingers in a way that only the best supervillain performances ever can. The best villains are always the hero of their own story, and Killmonger’s motives may be radical but have a solid basis in his own lived experience. By the climax of the film, he’s clearly exposed Wakanda’s isolationism for the misguided error in judgment that it was.

After its title character stole the show with his arsenal of “Street Fighter” moves in “Civil War”, there’s plenty of finely-tuned action sequences in “Black Panther”, particularly a car chase down the streets of Busan. It curiously showcases another of the film’s strengths, one of refinement, keeping the comic relief in check compared to other MCU films. (This may be seen as a particularly irksome issue in the “Guardians of the Galaxy” films, which can drift a little too heavily into outright comedy for my taste.)

The Dora Milaje are the loyal bodyguards of the Black Panther 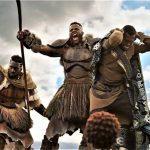 The Jabari tribe joins the fight for Wakanda

However, the best, most standout set pieces of the film are the ritual combat matches atop a waterfall, where the five tribes of Wakanda are permitted to submit a challenger for the nation’s throne. This is perhaps the first time that audiences have the chance to see African weaponry and fighting styles showcased in a major superhero film, and martial arts lovers will relish how integral the elements of tradition and ritual prove to be for the film. After defeating M’Baku in a hard-hitting brawl, T’Challa finds himself standing his ground against Killmonger’s challenge to the throne, and the film finds a clever way to carry their initial match over into the finale without technically making it a rematch. Each combatant clad in an energy absorbent Black Panther suit, our hero and villain face off for the fate of Wakanda in the depths of a Vibranium mine, with “The Blade II Method” of interweaving CGI and wire-fu into the action for anything beyond the human capabilities of the actors’ put to good use!

As the first superhero movie of the year, “Black Panther” delivers a terrific opening kickoff, proving a worthy follow-up to its title character’s big screen debut in “Civil War”. With an excellent rendering of the nation of Wakanda, a uniquely ritualistic approach to superhero action, and a performance from Michael B. Jordan destined to be remembered among the best supervillain portrayals of all-time, “Black Panther” without question earns its spot on the list of the MCU’s greatest hits. And, as always, watch out for that Stan Lee cameo!

What are your impressions of Black Panther, seen it yet? Is this the best superhero fighter so far? Let us know in the comments below, join in the conversation on Facebook and follow us on Twitter. (Be sure to check out our other fu-tastic movie reviews as well!)