Tiger Shroff is back for another Kalari-fuelled smackdown in “Baaghi 2”, the sequel to 2016’s “Baaghi”. While not groundbreaking in the arena of originality per se, “Baaghi 2” benefits from a stronger script and sharper direction in comparison to its predecessor, each of which know how to advantageously exploit the immense physical talents of its leading man. And while the film ebbs and flows with less of a breakneck pace than the original, “Baaghi 2” lays a firmer foundation on which to build its astonishing action sequences, in the run up to a monstrously explosive finale!

Tiger Shroff in training for Baaghi 2

Captain Ranveer Pratap Singh aka “Ronnie” was once a rebellious youth, but has since risen to the ranks of Captain within the Indian Army’s special forces. While on duty in the mountains of India, Ronnie receives a call from his ex-girlfriend Neha, his first contact with her in four years. After receiving approval for emergency leave from his superiors, Ronnie meets with Neha to learn that her young daughter Rhea had been kidnapped two months prior following a car-jacking assault that left Neha in a coma for several weeks.

While the police, Rhea’s school officials, and her husband Shekhar all insist that Neha never even HAD a daughter, attributing her contrary claims to PTSD brought on by the assault, Ronnie suspects there’s more to the story and continues his search to uncover the truth of Rhea’s whereabouts. 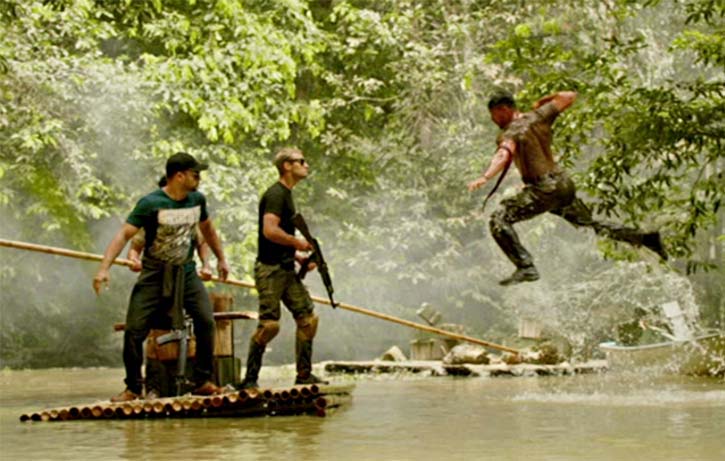 A devastating flying forearm out of nowhere

By far the biggest disappointment of the original “Baaghi” came in the form of its dearth of originality that proved a distraction (albeit not a fatal one) from its exceptional action sequences. The film was clearly crafted as “The Karate Kid” meets “The Raid”, which by itself would’ve been perfectly engaging, and perhaps even something of a brainstorm of an action premise. However, the film’s second act would morph into far too blatant of an “Ong Bak”-knockoff to overlook amid the astonishing action bookending it.

Fortunately, while “Baaghi 2” has its own tributes to pay to the action movie gods, it takes a much more measured approach in doing so. Just a casual glance at the trailer or poster, and “Bollywood Rambo” is the quickest shorthand to spring to mind here. However, the film approaches this idea with a much better understanding of how to pay an homage than its predecessor did.

Ronnie is a master of Kalaripayattu

Indeed, after introducing us to Ronnie in his new Army digs in the beginning, the film actually holds off on the “Rambo” homaging until the third act. “Baaghi 2” also seemingly wants to position itself as much of a standalone sequel as it possibly can, with so little reference made to what came before that the ‘2’ could be dropped from the title altogether and it wouldn’t effect either film at all. Maybe the idea for “Baaghi” is to always follow a new “Rebel” (the English-translation of “Baaghi”) named Ronnie from one movie to the next, which would certainly account for Kalari Grandmaster Shaurya Bhardwaj returning to an entirely new mentor role for this film. That said, an Indiana Jones homage would be the most logical course for the forthcoming “Baaghi 3” to follow, obviously!

“Baaghi 2” also keeps the waves of action more measured in comparison with the original. Ronnie’s first display of super-soldier excellence is largely delivered in the form of a flashback that mostly just gives the Cliffs Notes (or ‘cliffnotes’) of how everything went down, just to let the audience know that the title of “Rebel” still applies. The first big smackdown comes when Ronnie, fed up with the stonewalling of the local authorities, lets the entire police station have it in a fit of rage. From there, the film switches gears to become something more along the lines of a detective movie for much of its middle half, as Ronnie digs deeper into the truth behind Rhea’s kidnapping.

Ronnie puts the bad guy down 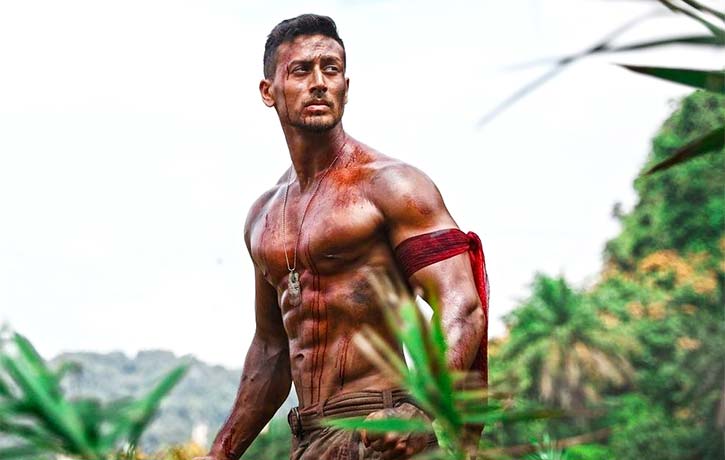 That shifting of gears ultimately gives way to a deeply heartbreaking plot twist that’s one of two curveballs the film throws at you – the other coming at the very end, and both fully displaying how much of a leg up “Baaghi 2” has on the original, script-wise. However, you came for the bells on whistles, and you get that in spades in the final third with a near-ceaseless cavalcade of action.

It all kicks off in an auto-shop with such highlight moments as Ronnie going “Ip Man” on one foe and punching two enemies into a parked car with such force as to send it sliding a good five feet. After that, the film kicks into full “Rambo” mode with a rumble in the jungle that sees Ronnie blasting enemies away with machine gunfire one moment and leaping out of a lake like Aquaman to pounce on his opponents the next. While the finale doesn’t feature the one-on-one showdown that was a great strength of the original, there’s no argument that Tiger Shroff out-and-out amazes in every second of the film’s final third – the term “One Man Army” has seldom been more applicable as it is here!

Ronnie ready for the Rambo rumble

Getting in a powerful forearm

With a stronger script and better pacing than the original, along with outstanding action sequences and a tremendous leading man performance from Tiger Shroff, “Baaghi 2” is an absolute blast. On top of that, it’s got a much better understanding of the tact needed to properly execute an homage, and scratches the “Rambo” itch in all the right ways. Bring it on, “Baaghi 3”!

The kidnappers prepare to pounce on Neha and her daughter

Ronnie reports to the boss

Ronnie was the ladies man in college

Seen “Baaghi 2” – what are your impressions on Bollywood’s climb up the fight-action ranks (since it doesn’t look like they’ll be stopping any time soon)? Which fight scenes and stunts out of India have you enjoyed the most so far? Let us know in the comments below; Like, share and join in the conversation on Facebook and follow us on Twitter & Instagram. Enter the FUniverse as we continue the Bollywood theme – check out “Brothers”, “Commando: A One Man Army”, and “Commando 2: The Black Money Trail”!)