It can truly be said that we live in a golden age of comic book movies, something that a ten year-old me would’ve never dreamed he’d be able to proclaim – let alone do so with such unabashed pride! But now, even the most off-beat of costumed crusaders is getting their due, on both the big and little screens. Indeed, there’s one who’s finally being recognized for the righteous badass that comic book readers have always known him to be – none other than the King of Atlantis himself, Aquaman.

Believe it or not, there was a time when Aquaman was the punchline of superheroes, with the label of “World’s Lamest Superhero” branded onto him ever since his appearances on the Hanna-Barbera animated series, “Super Friends”. Of course, one need only crack open the pages of a single Aquaman comic to know that Arthur Curry can be called many things, but “lame” is most certainly not one of them. However, all of this is really a moot point, given that Arthur is finally taking the Throne of Atlantis to the big screen in James Wan’s superhero adventure “Aquaman”. And sweet Poseidon, does “Aquaman” swim right to the very top of all the superhero adventures 2018 has had to offer!

It was a dark and stormy night on the coast of Maine when lighthouse keeper, Thomas Curry, played by Temuera Morrison, discovered an unconscious woman washed ashore. We she comes to, she reveals herself as Atlanna, played by Nicole Kidman, princess of the undersea kingdom of Atlantis, who fled to the surface world to escape her arranged marriage. She and Thomas eventually fall in love and have a son, whom they name Arthur. But when Atlantean soldiers attempt to bring her home, she is forced to flee, leaving Arthur in the care of Thomas, and under the tutelage of her royal advisor, Vulko, played by Willem Dafoe, who trains Arthur to master his Atlantean abilities, including his power to telepathically communicate with aquatic life.

David prepares to get revenge on Aquaman as Black Manta

Thirty-three years later, Arthur’s half-brother Orm, played by Patrick Wilson, rules the undersea world as King of Atlantis, and seeks to consolidate his power by uniting the seven cities of Atlantis in a war against the surface world. Meanwhile, Vulko and Orm’s unwilling bride-to-be Mera, played by Amber Heard, are certain that only by Arthur taking the throne of Atlantis can Orm’s assault on the surface world be prevented. Though Arthur, played by Jason Momoa, wants nothing to do with Atlantis, he reluctantly agrees. Accompanied by Mera, they begin a quest to find the magical Trident of Atlan, an artifact wielded by the kingdom’s original ruler, in order for Arthur to take his place as the new King of Atlantis.

No other comic book movie – indeed no other movie period – released in 2018 even comes close to the sheer visual wonder that “Aquaman” treats its audience to. Even a passing glance at any random Aquaman comic would make clear that the film more than had its work cut out for it in bringing the undersea world of Atlantis to life.

Orm is determined to rule the high seas as Ocean Master

Thankfully, James Wan heeded that call about five times over. To see “Aquaman” is to be truly taken into another world completely, one that seriously demands the very best IMAX and 3D performance your preferred movie theater has to offer to truly absorb the film in all its visual splendor. Perhaps that makes it all the more fitting that it should debut at the end of the year.

“Aquaman” also represents a genuine marriage of CGI with wire-work and practical action, a trend that’s growing more commonplace among comic book films, but one that’s crafted to perfection here. The first big action sequence sees Atlanna battling a group of Atlantean soldiers clad in battle armor and blasting literal laser cannons, all in one unbroken shot. From the very beginning, Wan crafts the action set pieces to utilize the kind of visual effects necessary for a comic book movie, but he also places just as much emphasis on the human element, with real stunt work and fight choreography right at the center of the action.

And rest assured, the film only gets crazier from that point on. The introduction to our titular hero sees him lift a submarine out of the ocean (World’s LAMEST superhero, everyone!), climb aboard, and battle the commandeering pirates like a pro-wrestling match on the high seas. This set piece also proves pivotal to the story, as it marks the origin of one of our hero’s arch-nemesis, Black Manta, played by Yahya Abdul-Mateen II. His mastery of bladed weapons gets a major upgrade when he and Arthur meet again in Sicily, our antagonist now clad in his classic comic book armor and wielding Atlantean weaponry. The sequence is intercut with Mera evading Atlantean soldiers in Black Manta’s employ in a rooftop parkour chase, culminating in the most show-stopping display of Mera’s power of hydrokinesis throughout the entire film, which, quite unexpectedly, involves a wine cellar. The “Avatar” fan in me would like to resist the urge to point to Mera in “Aquaman” and tell the makers of the upcoming Netflix show this is how you do Waterbending in live action, except I’m not going to – this is how you do it, Netflix!

Of course, with so much of the film being underwater, it needs to deliver the goods under the sea, as well and its union of CGI and practical action goes to its wildest extreme in Arthur and Orm’s initial gladiatorial match. The visual effects and wire-work serve the scenario perfectly, with Arthur and Orm soaring through the arena as if they were airborne. Jason Momoa and Patrick Wilson also very clearly trained heavily in weapons combat for the Trident-centric nature of their battles, and its part of what makes the film’s finale so satisfying.

Arthur boards the sub to battle its pirate boarding party

King Nereus of Xebel is sceptical of Orms proposal

Mera convinces Arthur he must put a stop to Orms plot 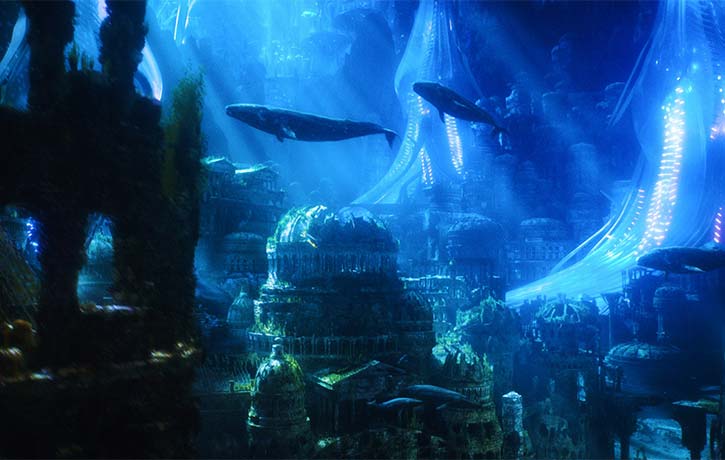 Under the depths of the ocean lies the Kingdom of Atlantis

With a massive army of Atlantean warriors and gigantic sea creatures waging war like a “Star Wars” dog fight unfolding underwater, Arthur and Orm face each other once more – now fully assuming their respective identities of Aquaman and “Ocean Master”. Just as with the rest of the film, Wan knows how to bring that vital human element to the action of a superhero movie, and merges the clashing of two tridents with the CGI-fuelled visual spectacle unfolding around it.

Whether you’re a comic book fan or just love a good old-fashioned adventure, “Aquaman” is the action-packed big-screen bonanza you simply cannot miss this holiday season. Jason Momoa makes the character his own as flawlessly as Hugh Jackman did for Wolverine, and he and Amber Heard have perfect chemistry bantering off one another in what is often a literal fish-out-of-water scenario. Patrick Wilson and Yahya Abdul-Mateen II also inject the film with serious emotional power as Orm and Black Manta, the latter villain especially being one that demands more stories.

Arthur to the rescue

Arthur Curry is the protector of the deep

Thomas Curry believes his son can bridge land and sea

Arthur and Mera arrive in Atlantis

To top it all off, the film is not only the year’s undisputed visual effects masterpiece, but it blends an absolutely amazing whirlwind cocktail of CGI and wire-work with grounded action and daredevil stunt work. It’s a given that world premieres always get the best perks, pity that few theaters are likely to throw in a performance of the ‘Māori Haka’ ritual dance before each showing…

Regardless, see “Aquaman” on the biggest screen you can possibly find…what a way to close out 2018!

“Aquaman” is creating tidal waves in theaters around the world right now; what impressions are flooding your mind so far given the film’s stormin’ stunts and titanic action on both sea and land? Let us know in the comments below; Like, share and join in the conversation on Facebook and follow us on Twitter & Instagram. (Remember: “everything is kung fu” so, high tide you got more from the FUniverse; dive right in to KFK’s deep currents of Top 10’s, find some gifts check out our in-DEPTH interview with “Aquaman” fight coordinator, Jon Valera, and subscribe for videos too. Happy Christmas FUperheroes!)