Bollywood’s rising Kalari-kicking action hero Vidyut Jammwal is back to throw down with bad guys and give every GQ cover model a run for their money in “Commando 2: The Black Money Trail”. The sequel to 2013’s breakout hit “Commando: A One Man Army“, the film validates the charisma of its leading man and transitions its hero’s renegade super-solider story into an undercover heist thriller without ever betraying the tone of its predecessor’s adrenaline-fueled origins.

Vidyut Jammwal returns to the role of Indian Commando extraordinaire Karan Singh Dogra, once more carrying the film on his supple shoulders with a blend of tough guy leadership and a finely-tuned mastery of Kalaripayattu. Adah Sharma portrays his selfie-obsessed ally and love interest Bhavna Reddy, while Freddy Daruwala steps into the role of his hot-headed teammate Bakhtawar Khan. Sumit Gulati portrays the in-over-his-head hacker Zafar Hussain, while Shefali Shah plays Indian government official Leena Chowdhury, with Suhail Nayyar as her trouble-prone son Dishank, and Esha Gupta rounding out the cast as the film’s villainous femme fatale, Vicky Chadda. 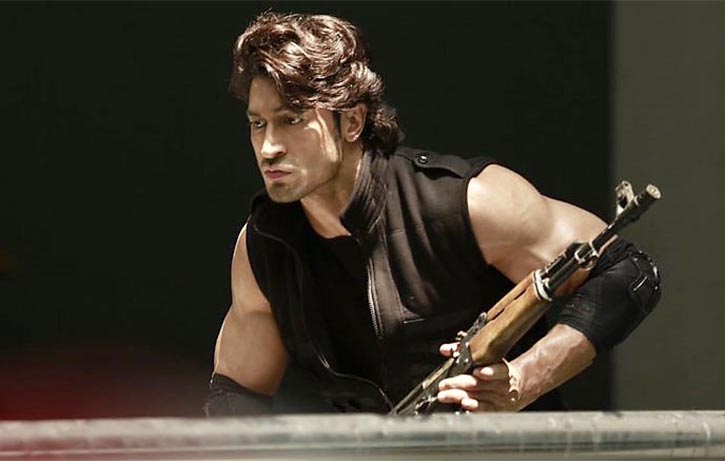 Following his court-martialling at the end of “Commando: A One Man Army”, Indian Commando Karan Singh Dogra has been reassigned to put a stop to the ongoing money-laundering operation that continues to bleed his country dry and impoverish millions of his countrymen.

Karan and his superiors are on the verge of pinning down India’s most notorious money-launderer, Vicky Chadda, who is currently avoiding arrest in Malaysia, but they suspect ulterior motives from Indian Minister Leena Chowdhury after she assembles a team of rank amateurs to extradite him, leading Karan to infiltrate the team to ensure the mission is completed. Unfortunately, Karan and the team discover all too late that Vicky’s wife “Maria” is the real Vicky Chadda, and find themselves in a race against time to stop her final gargantuan money laundering operation from the people of India.

A Tale of Two Biceps

One of the most praiseworthy aspects of “Commando 2” is how much it goes out of its way to not lazily repeat its predecessor. Whereas the first film positioned itself as a kind of Indian “Rambo” (the forthcoming Bollywood reboot of “Rambo” with Tiger Shroff in the title role notwithstanding) of a super soldier minding his own business only to find himself forced into a new conflict, “Commando 2” is more akin to a heist film or even a James Bond thriller.

Vidyut Jammwal once more struts his bonafides as a leading man and carries the film like a true pro. This time, however, he’s aided in this regard by some more intricate but decidedly stronger writing for the sequel. The cat-and-mouse game between Karan and Vicky takes the viewer through many more twists and turns compared to the first film’s simpler narrative of our hero freeing a small community from the stranglehold of a crime boss, but it’ll bring a smile to your face to see Karan being forced to use his wits to adapt to Vicky’s machinations.

The film shows just how many steps it is ahead of its audience by playing its hand pretty early on in Karan’s decision to disregard orders and take Vicky’s side after she convinces him that she and her husband are essentially being framed, only for Vicky to betray Karan after murdering her husband in cold blood. This course of action on Karan’s part frankly leaves him looking like an idiot for listening to Vicky’s sob story and simply taking her at her word, but by the end of the film, it’s clear that our hero has had an ace up his sleeve the whole time and boy, will it leave you grinning ear to ear when he deals it in!

Karan is ready to GO

Karan takes out two foes for the price of one

From the moment the film gets started, it’s clear that the makers of “Commando 2” knew what people loved about the original film and waste no time at all in serving up a second helping with the sequel. The film kicks off with an absolutely sensational opening set piece where Karan kicks and flips his way through an entire building full of henchmen that looks like what you’d get if “District B13” had a baby with “The Raid“.

Adah Sharma is in more or less the same role Pooja Chopra was in the first film of being Karan’s arm candy, but even amid her quest to snap the perfect selfie, she’s of greater assistance to him than the rest of his mostly useless teammates, including at an airport skirmish with a group of Vicky’s henchmen backflipping around on metallic pogo-stick legs which Karan counters with some twirling bo staff work.

The film isn’t without a few hiccups in its action sequences. I could’ve done without the admittedly brief street chase that hews too closely to the parkour chase in “Ong Bak” (though Vidyut’s method of sliding under a moving car is arguably more “Whoa!” worthy than Tony Jaa’s sliding split for the same stunt). Although entertaining enough overall, try as it might, the film never quite manages to reach the same wow factor as its fantastic intro. At least, up until the finale, that is, when the film bookends its excellent opening with Karan battling his way to the top of a Malaysian high rise “Hardcore Henry”-style for a showdown with Vicky’s beefy right-hand man K.P., played by bodybuilding champion Thakur Anoop Singh.

Like Karan’s smackdown with a hired hitman at the end of the first film, it’s the only real one-on-one fight sequence in the film, and despite some less-than-stellar green screen work on the Malaysian skyline, it unquestionably outdoes the finale of the original, with Vidyut breaking out the always awe-inspiring Guyver kick and an even more impressive pro-wrestling-inspired- takedown than he put to use the last time around!

Karan and his team arrive to extradite Vicky Chadda

Karan and Bhavana ride into action

Karan and his team plot their next move

Bhavana is starting to fall for Karan

Karan smashes through his enemies

Be genial even to your enemies

“Commando 2” changes up the formula of its predecessor to craft an edge-of-your-seat heist thriller while delivering all the martial arts action and stunt work that fans of the original crave. Vidyut Jammwal delivers another performance of Alpha-male charisma and Herculean physicality and solidifies himself as Bollywood’s undisputed ‘King of Kalari’. With “Commando 3” already greenlit, another action-packed adventure with Karan Singh Dogra is an invitation too good to refuse!

Martial Art of the Month: Aikido