In the art of film criticism, there exists a grey area where one can feel a given movie is frustratingly problematic yet find themselves still giving it two very enthusiastic thumbs up. “Baaghi” is not a towering accomplishment of screenwriting and it has areas where it is seriously lacking in originality and it still ends up being a genuine blast specifically because its leading man, Tiger Shroff. Through a combination of his powerful charisma and astonishing martial arts ability, he elevates the film way beyond what it would’ve been without him in every last second that he’s onscreen.

ShraddhaKapoor steps into the role of Ronny’s love interest, Sia, with her disapproving father portrayed by Sunil Grover, while Sudheer Babu plays Raghav, Ronny’s villainous rival for Sia’s affections with an endless army of henchmen at his disposal, including the nimble and agile Yong, played by Kazu Patrick Tang.

In India, Ronny is what’s called a “Baaghi” – a rebel -and his father decides to get some discipline knocked into him by sending him to study Kalaripayattu under the tutelage of Guruswamy. Though Ronny is far more interested in pursuing the affections of Sia, a lovely young woman he’s encountered multiple times in the area, he soon begins the thrive under his new mentor’s instruction.

Sia’s father disapproves of his daughter’s blossoming romance with Ronny, and recruits the help of one of Guruswamy’s former students, Raghav, who has plenty of incentive to take Ronny out of the picture, given that he shares Ronny’s feelings for Sia.

Ronny works his charm on Sia

Raghav sneers with contempt at all of his enemies

Above all else, “Baaghi” is a true testimony to Tiger Shroff’s charisma, screen presence, and martial arts ability, because it could all too easily be rather unmemorable without him. Indeed, it’s not too much of a stretch to say that Tiger IS the movie. The script is clichéd and seriously derivative in parts, with the film playing out like a cross-pollination of “The Karate Kid“, “Ong Bak” and “The Raid“, with a tiny blink-and-you’ll-miss-it sprinkling of “Bulletproof Monk” in the first act.

That wouldn’t necessarily be a criticism (how many times have we all seen a film described as “movie A meets movie B” in an enthusiastically positive review?) but there’s a fine line between homage and rip-off, and it’s one that “Baaghi” isn’t as careful to avoid crossing as it should be! Really, all three acts of the film could be pretty neatly divided along which of the aforementioned martial arts classics “Baaghi” parallels.

The first third of the film, focusing on Ronny’s Kalaripayattu training, could be pretty accurately nicknamed “The Kalari Kid”, complete with its own version of “wax on, wax off”, and surprisingly, it actually works about as well as the 2010 reboot with Jackie Chan. Both work in their own martial arts content with the same story template, and “Baaghi” really benefits from the presence of genuine Kalari guru Shifuji Shaurya Bharadwaj, who swaps out Mr. Miyagi’s “no can defend” crane kick for a standing split and some Crane’s Beak strikes in the knowledge he passes on to Ronny, both of which hugely pay off for our hero later on. Honestly, it’s about time Kalaripayattu got “The Karate Kid” treatment, and “Baaghi” does that proud.

The “Ong Bak” section in the film’s second act is by far its most problematic. This portion of the film sees Raghav kidnapping Sia and bringing her to his compound in Thailand, and try as she might to kick butt when given the chance to, Shradda Kapoor is largely relegated to either a hostage or Ronny and Raghav’s proverbial Helen of Troy (the film’s obligatory Bollywood dance number “Cham Cham”, does a lot more favors to her physical abilities).

Ronny’s mission to locate Sia sees his taking part in an underground fight club, and evading pursuers in a foot chase through the streets of Bangkok, and in both cases, it is WAY too similar to the equivalent set pieces in “Ong Bak”, even with some of the camera angles evoking some undeniable flashbacks. However, make it past that point, and you’re rewarded with the film’s final third, its strongest section, by far, where Ronny battles his way to the top of Raghav’s compound to face his enemy at the top.

The parallels to “The Raid” are clear just from the trailer (I even made that clear in my piece on the impact of “The Raid”), but this is where the film is cognizant to use the core concept of an earlier classic as a template without crossing the line that the second act drops the ball at. Tiger is absolutely on fire in this portion of the film, single-handedly delivering India’s best action sequence of the year, which even makes time for a blazing one-on-one between him and Kazu Patrick Tang leading all the way to his final confrontation with Raghav, where our hero and villain’s Kalari training come full circle.

Ronny and Sia get ready to settle the score

Guruswamy takes Ronny through the stances of Kalaripayattu

An over casual Ronny meets Guruswamy

Ronny in a tight squeeze

Raghav ready for the throwdown showdown

“Baaghi” is a hard movie to rate, for sure. It’s blandly written and quite noticeably lacking in originality at times, but for all the frustration that brings about, it’s simply awesome to see that Tiger Shroff has managed to infuse his brand of stunning, electrifying actioninto the film making it a colorful, enjoyable ride. In terms of powerful, gravity-defying martial arts talent, he’s absolutely the Indian equivalent of Tony Jaa, Marko Zaror, and Scott Adkins, and with the upcoming “A Flying Jatt” and the recently announced “Baaghi 2” setting him up as Bollywood’s next big action star, it’s clear that like Ronny himself, Tiger’s expectedly stellar career is just getting started… 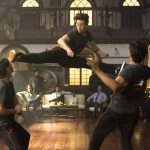 Guruswamy puts a stop to the match

(Mostly based on the action and Tiger’s performance)