Jack Black as a kung fu fighting panda bear. It’s something that sounds rather absurd on paper but the end result manages to provide a great underdog story that harks back to old-school Kung fu films of the 1970s.

The lead role of Po is played by comedic actor Jack Black (School of Rock, Be Kind Rewind). Dustin Hoffman (Meet the Parents, Hook) plays Master Shifu, who gives a fantastic performance that stretches his comedic muscles while giving a character genuine gravitas; required when portraying a kung fu master!

Other notable cast members include Ian McShane as Tai Lung; a genuinely threatening villain with the right dose of comedy. Randall Duk Kim gives a wonderfully low-key performance as the old and wise Master Oogway who leaves the film far too soon.

Special mention should go to the Furious Five played by an eclectic mix of comedians and cinematic action icons. Leading the pack is Angelina Jolie as Tigress with Lucy Liu playing Viper, a good natured snake. Seth Rogen brings his comedic charm as Mantis and brings a wonderful contrast of his deep gruff voice to the character’s small stature. Jackie Chan rounds off the Furious Five and Kung fu geeks are guaranteed to jump with joy when his character, Monkey, appears on-screen. Even the characteristics of Monkey are very Jackie Chan-esque, from his acrobatics to the use of the Guan (Chinese staff weapon), a weapon of choice for Chan. If there was a downside with such a wide cast is that not enough time is devoted to each of the Furious Five, though that may be solved through spin-offs. 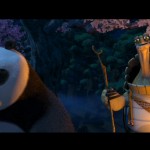 They Fought As Legends

Tai Lung knows how good he is

Showing the kids how it should be done

Set in a fictional ancient China, Po works for his goose father, Mr Ping in his noodle restaurant but dreams of becoming a true kung fu master.

Po manages to fall (literally) into the arena where the Dragon Warrior is to be selected. To everyone’s surprise, Master Oogway believes Po to be the said warrior and Master Shifu reluctantly takes Po under his wing.

During Po’s training and his fan-boy antics, Master Shifu’s former student, Tai Lung, escapes from prison and is set to return to take the Dragon Scroll. Along with the Furious Five and Shifu, Po must quickly master kung fu and protect his home land from Tai Lung’s incoming onslaught.

While kept in the realms of family entertainment, the film’s action sequences are exciting and very well executed, which can be enjoyed by both young and mature audiences. Dream Works really pushed the boundaries of animation with this film and is evident that there was research done in martial arts techniques and animal styles. The scene where the Furious Five practices their kung fu styles using over-the-top training equipment, harks back to Shaw Brothers classics like 36th Chamber of Shaolin (1978) and Invincible Shaolin (1978).

The action doesn’t kick into overdrive until Tai Lung’s escape as he fights off hoards of rhino guards, defying the law of gravity and practically destroying the whole prison. The scene proves as one of the film’s highlights and perfectly demonstrates Tai Lung as a destructive threat.

The next major action scene is set on a rope bridge and pits Tai Lung against the Furious Five. Tigress, being the leader, begins her attack in a substantial one-on-one with Tai Lung. It’s a very well thought out fight with fast hand/foot combinations, recreating the distinct choreography of 70’s kung fu action. The downside with this sequence is that there was no real opportunity to display the other four masters’ fighting styles, especially Jackie Chan’s Monkey. Nevertheless, the sequence is incredibly complex animation-wise and succeeds in creating an enthralling fight while maintaining a real sense of danger.

Master and Student. Father and Son.

Food is my training

The finale can be divided into two scenes. The first is the battle between Master Shifu and Tai Lung; an old-school master and student battle that not only offers fantastic combat, but also furthers the tense relationship of father and son. Choreography-wise, Master Shifu focuses on defensive techniques while Tai Lung is all about offense – a contrast in styles that adds to the characters’ motives; Master Shifu trying to calm the situation down versus Tai Lung’s relentless drive to obtain the scroll and ultimately make his Shifu proud. The scene possesses the most emotional depth and is a testament to the filmmakers that they were able to merge fight action with complex character study seamlessly.

Po comes to Master Shifu’s rescue and finally faces Tai Lung in the ultimate battle of supremacy. With the return of Po, there is an abrupt change from dark and complex to light, fluffy and funny. While this is understandable given the main demographic, it would’ve been great to see the father/son relationship be resolved between Master Shifu and Tai Lung. As such, there is a feeling that there was more story between these two characters but had to be cut out so to finish the story of the main hero. Nevertheless, the actual bout between Po and Tai Lung is entertaining as the former incorporates the ‘food’ kung fu style he has learnt. One particular highlight sees Po using his body-weight by absorbing the power of Tai Lung’s attacks and using them to his own advantage. Even the kung fu techniques mixed with physical comedy are reminiscent of Sammo Hung’s moves in old-school film classics like Magnificent Butcher (1979).

Conflicted as he battles his son

At peace with the universe

A flying kick from Mantis

Most would agree that in order for a film of this ilk to appeal to a younger generation, the ideals and moral values of martial arts should be placed at the forefront. However, the martial arts action should still be executed with a certain level of finesse without resorting to displaying gratuitous bloodshed.

Kung fu Panda succeeds in both regards and easily ranks as one of DreamWorks’ best animated efforts. The film spoils us with a rich story and characters while also being an ebullient love letter to classic kung fu films of yesteryear.