Probably most recognisable as Colonel William Stryker from “X-Men: Days of Future Past” and “X-Men: Apocalypse”, Australian actor Josh Helman takes on the formidable role of a formidable man, Lenny Mclean.

My Name is Lenny vividly brings to life true events

Celebrated British actor Sir John Hurt plays “Leslie Salmon”, a 100 year-old East End barfly who has seen it all. Known for his roles in “Alien”, “The Elephant Man”, “Scandal”, “The Naked Civil Servant” and as Mr Ollivander in the “Harry Potter” movies, this was sadly his last completed big screen role. Sir John Hurt passed away aged 77 on 25th January 2017.

It’s 1975 and Lenny McLean is a 27-year-old undefeated bare knuckle fighter. He is having a drunken, brutal and bloody street fight goaded on by the surrounding audience of equally drunk spectators. Flashing back to Lenny’s childhood, the film does not hold back in its depiction of the abuse he received at the hands of his stepfather. Just as the real Lenny described in his autobiography, his stepfather would stand over him shouting “I’m the guvnor!”. McLean’s brutal upbringing as a child at the hands of his stepfather, manifests itself in moments of savage violence in the adult McLean.

Lenny gets back to basics

When Lenny sees a poster declaring Roy Shaw as “the unbeatable and undefeatable Guvnor” it reignites those memories in Lenny of his stepdad. Old Eastender Leslie Salmon warns Lenny to stay away, with tales of Shaw’s criminally insane escapades in a secure prison. Lenny isn’t dissuaded and an unlicensed boxing match is hastily arranged between the two. For the first time in Lenny’s fight career he takes a sound beating. His cousin and ex-boxer Johnny Bootnose immediately identifies the problem. Lenny was out of shape and not properly trained to fight an ex-pro like Shaw. In a very authentic recreation of Lenny’s real training camp, he gets back to basics. But McLean must defeat his own inner demons before he can face Shaw again, and battle for the ultimate bragging rights and title of “The Guv’nor”.

The 1970s are faithfully recreated

There is a more stylised fight in a snooker hall

The fights are raw brutal and frenzied

The action in this film is in keeping with the subject matter: raw, brutal, frenzied animal violence. It doesn’t make for pretty cinematography. What it does do is grab the viewer by the throat and punches them between the eyes, as they are dragged into the thick of every violent encounter depicted.

The recreated fights between Shaw and McLean mirror some moments exactly as they happened, as documented in “The Guv’nor”. Michael Bisping captures Shaw’s movement and style especially well. The training scenes are also faithfully recreated. Looking as though they have stepped straight into the original documentary footage, Lenny and Bootnose workout and spar in a boxing ring made from old gas bottles at Kenny Mac’s yard. In the “Making of” documentary there is an exact recreation of the footage of Lenny running through a park in his red jumper shouting “I’ll kill that Roy Shaw!”, although it appears to be cut from this particular montage.

There is a slightly more stylised ruck in a snooker hall when four thugs take a shot at McLean. No neat martial arts choreography here though, just pure punches, kicks, headbutts and rage.

Bootnose moves Lenny’s training into a proper boxing gym and the authenticity seeps back as the old pro dispenses his wisdom. Lenny finally learns it’s not all about landing the big shots, but to bob, weave and minimise how many shots land on him.

The final bout between Shaw and McLean plays out to a rousing score with some slow-motion close-up shots allowing the viewer to almost feel each thunderous blow.

As the film closes with actual footage of Lenny McLean, you realise just how good a job Josh Helman has done in capturing his quirky mannerisms and speech.

The unbeatable and undefeatable Guvnor

This film is a compelling companion piece to last year’s award-winning documentary “The Guv’nor”, and also Lenny’s earlier number one-selling autobiography of the same name. If you enjoyed “The Guv’nor”, “My Name is Lenny” vividly brings to life a snapshot of some of those true events from Lenny McLean’s life. Framed in the trilogy of unlicensed boxing bouts between McLean and Shaw, it neatly draws the journey of a complex, emotionally-scarred man, and how the violence of his past and present affected him.

Considering Lenny’s own family were heavily involved in the production, it does not shy away from the darker side of Lenny’s personality. The depiction of his battle with his own demons is played out in raw detail. In one instance, a scene illustrating the time Lenny bit out his (former) best friend’s throat in a drunken rage is savagely recreated.

Nick Moran is superb as Bootnose 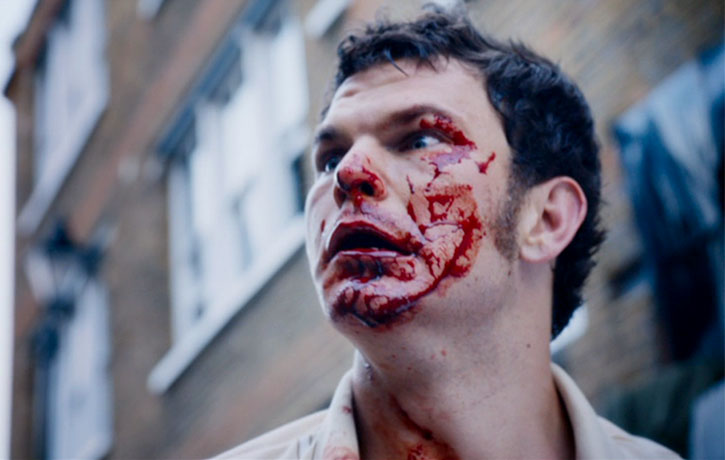 The film does not shy away from Lennys darker side

An exact recreation of the documentary footage

Josh Helman mostly plays a fairly accurate, gurning caricature of McLean, but a caricature nonetheless. Where he absolutely nails on his performance is when he switches from violent psychopath to caring husband or playful joker with just his eyes. You can almost see Lenny’s cogs turning behind his pupils. Sir John Hurt’s role is little more than a brief cameo. It is a poignant appearance and demonstrates why he is revered as an acting great. Nick Moran is superb as Lenny’s trainer Johnny Bootnose, delivering an even cocktail of a wise, old-school boxer, immersed in dry humour. In fact, the casting all-round is spot on.

The DVD and Blu-ray feature an insightful “Making of” documentary. It describes how the film makers worked to portray Lenny McLean’s internal conflicts through the recreation of his actual physical conflicts.

Lenny carries the emotional scars of his childhood

McLean receives the first beating of his fight career

This isn’t an action film, and it’s not Rocky or Raging Bull, but it is a fascinating visualisation of the stories that could only be told aurally in last year’s documentary. Thankfully it also isn’t one of those awful straight-to-DVD “Essex Gangster” films that seem to fill supermarket shelves these days. It is however an admirably-crafted, well-acted, gritty drama that is all the more fascinating because the lead character is true to the original man.

My Name is Lenny

Tekken 7: Tale of the Tape – Akuma vs Claudio Serafino!

Tekken 7: Tale of the Tape – Lucky Chloe vs Josie Rizal!