A biographical documentary about the legendary British street fighter Lenny McLean, who went onto became a best-selling author, actor and celebrity. Presented by his only son Jamie McLean and directed by Paul Van Carter. Available on DVD and VOD from 10th October 2016.

A camera crew follow Lenny McLean’s son Jamie, as he retraces his upbringing in London’s East End. Friends and family who knew Lenny contribute their memories of Lenny’s notorious life. The most recognisable contributor is the director of the “Sherlock Holmes” films, Guy Ritchie, who cast Lenny in his most famous film role as “Barry the Baptist” in the modern British classic “Lock, Stock and Two Smoking Barrels”.

Following his violent and abusive upbringing in post-war East London, Lenny McLean discovered that he had a talent for fighting. His reputation grew rapidly throughout his teenage years as an aggressive and violent bare-knuckle fighter. His “hardman” status led to him becoming an enforcer and debt collector, even working for the infamous Kray family and a notorious doorman who was once charged with murder. 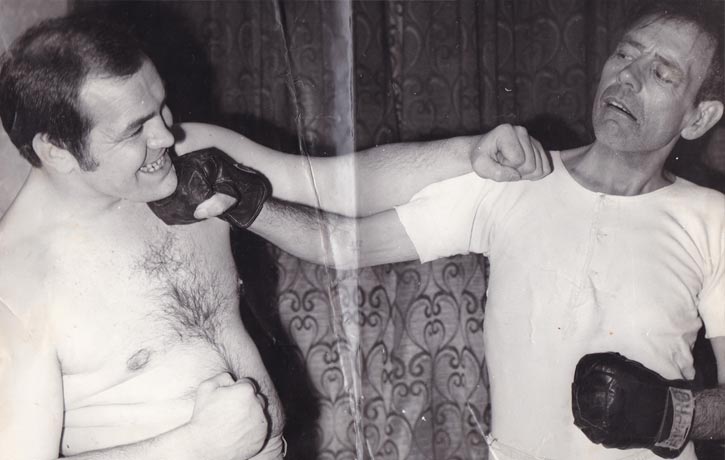 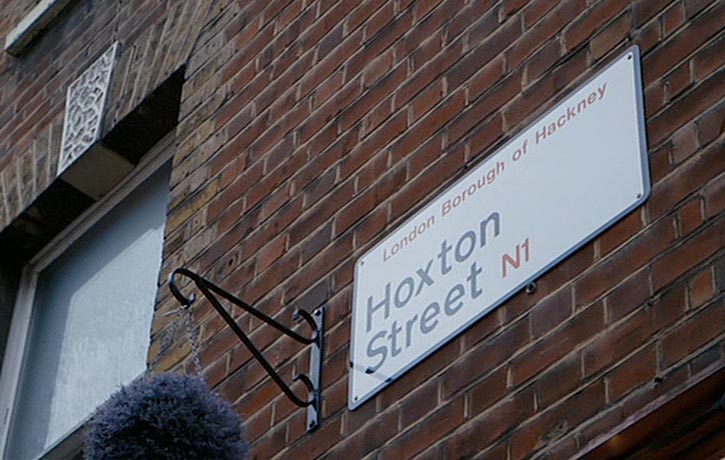 The McLeans grew up in Hackney

A loving husband and father

Whilst he trains at a local boxing gym, Lenny’s son Jamie describes a softer, more complex side to his father’s public persona. Jamie had recently been released from prison himself for a violent assault. As part of the documentary he wants to explore why his father had such a violent side to him. Lenny is shown in various television interviews discussing this violent reputation. When asked what is the worst thing he had ever done to someone, Lenny coolly replies, “Once in a bare-knuckle fight, I bit a guy’s nose off”.

Jamie vividly describes Lenny’s abusive upbringing at the hands of a violent stepfather. Lenny’s injuries included broken ribs and markings that were so bad, he would play out with his friends at the height of summer in jumpers and long trousers to hide them. As his stepfather beat him he would say, “I’m the guvnor”, a phrase that would stick with Lenny.

The tales of Lenny’s antics can be at once amusing and astonishing, but also horrific. Living in a thirteenth floor flat, Lenny and his friends used to get drunk and challenge each other as to who could hold on by their fingertips the longest over the balcony. In another anecdote, Jamie recalls seeing his dad coughing up blood and human flesh where he had bitten out the throat of someone he’d had a row with in a pub. That particular incident even horrified Lenny and made him give up alcohol. Lenny’s life often put him in harm’s way leading to him being shot and stabbed on more than one occasion.

Lenny had a funny side

Footage is shown of some very raw looking present-day bare knuckle bouts. What is amazing is that these days, if a fighter breaks a finger or a rib, the fight is stopped. In Lenny’s day, you just carried on fighting until one fighter was unable to continue. A modern fighter might have 20 or 30 fights. Lenny McLean claims to have had over 4000.

By his mid-twenties, Lenny realised he could make more money by fighting in unlicensed boxing bouts. One of the most notorious names on the unlicensed circuit was Roy Shaw, who had been certified criminally insane and a patient at the infamous Broadmoor Psychiatric Hospital. Shaw was titled “The Guv’nor” on the fight circuit and in the papers. This enraged Lenny and he went round Shaw’s local pub and other haunts, openly challenging him and declaring that he could beat him. Shaw was having none of it, leading to a trilogy of infamous fights. For the first fight, Lenny was so confident he could finish Shaw quickly, as he was used to in bare-knuckle bouts, he didn’t train. Shaw was used to preparing like a boxer, and could fight for a lot longer than Lenny. Shaw beat Lenny making him realise he had to take his training seriously. The documentary features some fascinating and often funny footage of Lenny training in an old scrap yard, punching bags, skipping, and sparring in a makeshift ring.

Lenny boasted that he could beat anybody

A favourite on the chat show circuit

Shaw was disqualified in the second fight after Lenny knocked him out of the ring. Shaw blamed his performance on having too much herbal tea before the fight, which sedated him. A decider between the two was arranged. Lenny trained at Freddie Hill’s boxing gym to get in the best shape he could. Freddie taught Lenny that he didn’t always have to take shots, but could slip and move and counter attack. There is footage of Lenny in the ring, bobbing, weaving and rolling like a pro, ready to deliver one of his devastating left hooks or right crosses. On 11th September 1978, 13,000 spectators filled the Rainbow Theatre in Finsbury Park, London. The footage shows Shaw coming out brawling, but we see a different Lenny. Instead of channelling his pure rage, Lenny looks like a boxer, dodging Shaw’s shots, dancing round the ring and when the time comes, landing combinations of explosive punches. Having floored Shaw in spectacular fashion, Lenny cries to the cheering crowds “Who’s the Guv’nor? I’m the Guv’nor!”. It’s an astonishing piece of film, put all the more into perspective by Jamie’s voiceover describing how Lenny would imagine his stepfather standing in front of him in the ring instead of his opponent.

As Lenny’s fame grew he started a firm of bouncers who worked the doors of some of London’s biggest venues, including Camden Palace, and The Hippodrome in London’s Leicester Square. His autobiography “The Guv’nor” became an instant best-seller and Lenny became a celebrity on the television chat show circuit, with audiences clamouring to hear about his fascinating exploits. His celebrity status led to acting roles, most famously in “Lock, Stock and Two Smoking Barrels”. His co-stars Vas Blackwood, Jason Flemyng and director Guy Ritchie recall with fondness their time with Lenny and that although he was humourous, he was absolutely professional as an actor.

Shaw vs McLean Part I 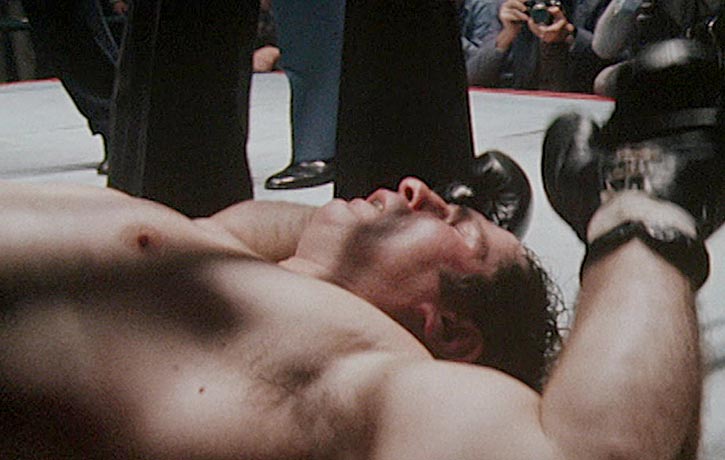 Shaw on the floor

As Barry the Baptist in Lock Stock and Two Smoking Barrels

Freddie Hill taught Lenny to fight like a boxer

Perhaps rather inevitably, the documentary camera crew catch Jamie being spoken to by the police, having had a scuffle in a café with someone who looked at him the “wrong way”.

The documentary draws to a touching close with Jamie coming to terms with the pleasant and unpleasant facets of his father’s life.

Having read Lenny McLean’s book of the same name, I was fairly familiar with his life story. This fascinating and insightful documentary into his life comes at the story from the slightly different perspective of those who were closest to him, especially his son Jamie.

Freddie Hill taught Lenny to fight like a boxer

A touching moment for Jamie

There are moments that are difficult for Jamie to discuss, but also some very touching moments in which, from Jamie’s point-of-view, his dad was a loving father and husband. Despite Lenny’s penchant for violence, he never raised a hand to his kids.

Jamie and the filmmakers share with us some very rare photos and footage of Lenny from his early childhood right up to his last few days. It’s incredible that so much film of Lenny was captured and survived from the 1970’s, especially when you think that video cameras were rare and no one had mobile phones! Although there are many people willing to talk about Lenny, many of his family members refuse to discuss his life on camera.

What this documentary does well to capture is that Lenny McLean was a force of nature, driven by his experiences of an abusive childhood and vented through his tough, violent East End lifestyle. But in spite of what he suffered, we discover he could also be a humourous, generous and caring man.

“The Guv’nor” delivers a compelling and candid view of how one man survived a tough East End upbringing, to become one of the most notorious fighters in Britain. The tale, like Lenny himself, is not always pretty, but you can’t help but watch!

The Guvnor out on DVD and VOD 10th Oct

McLean became known as The King of Bouncers

Jamie McLean and his Dad 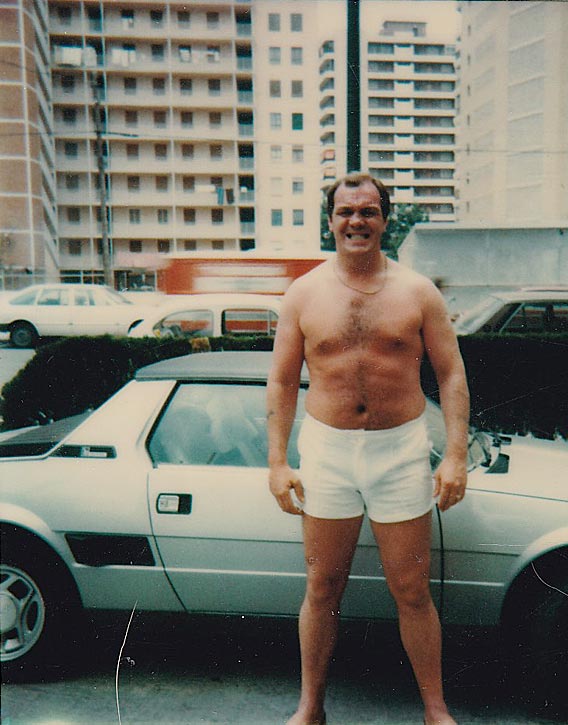 The Guv'nor is Coming!