Perhaps the greatest boxing movie ever made, Raging Bull is a hard-knock biopic detailing the life of former boxing middleweight world champion, Jake ‘Raging Bull’ LaMotta. Often billed as the greatest work from the famous actor-director partnership of Martin Scorsese and Robert DeNiro, the movie was adapted from the book ‘Raging Bull: My Story’ written by LaMotta himself.

The film is no less than iconic and is loved by boxing and non-boxing fans alike. Its gripping darkness and unrelenting realism create an immersive and emotional experience which has proved memorable by many. The epic fight scenes are known for their extreme effect and impressive authenticity.

Robert DeNiro excels as the controlling and neurotic boxer. As the film’s central character LaMotta dominates screen time and there’s hardly a moment in the film where he’s not on the screen. DeNiro masterfully plays the line between family man, supreme athlete and possessive sociopath. The character fails at hiding his deepest insecurities and his fragility screams from behind his macho exterior, achieving this balance is the mastery of DeNiro’s performance.

Joe Pesci plays Jake’s younger brother who acts as his manager, trainer and best friend. The chemistry between the two is famous and lends itself beautifully to the movie’s most intense and poignant scenes. Joe sometimes acts as the film’s point of reference for sanity, despite his own explosive moments.

The plot follows LaMotta through his life as a professional middleweight boxer, becoming world champion toward the end of his career. The narrative revolves around his personal struggles with possession, jealous paranoia and pig-headed arrogance.

The beginning shows his relationship with his first wife and his successful career, including his first of three fights with Sugar Ray Robinson. He meets his new wife Vikki and becomes obsessively paranoid about her relationship with their mutual acquaintances in the mafia.

In a similarly controlling fashion, the same mafia figures hold a constraint over Jake’s career. His chances of a title fight depend on his willingness to become involved in their illegal gambling scheme.

The film is driven heavily by character, making the plot an apparatus to explore the desires and anxieties of the central protagonist. Lines and action are directed in a fashion which is not strictly ‘exposition’ (exposing the story) but tries to reveal the underlying emotions present. Because of the film’s dramatic emphasis, it becomes less of a boxing movie, less even of a biopic, and more of a psychological war between one man and his dark side; the titular ‘Raging Bull’ inside him. Everything in the film becomes simply an external reflection of the man’s internal world -perhaps the same could be said of everyone?

Im not an animal

After becoming world champion, Jake retires to open his own bar and spend time with his family. This section of the film saw DeNiro, well known for his ‘method’ approach; gain sixty pounds in bodyweight to play the older, larger LaMotta. The final section is the darkest as Jake’s whole life rots away in front of him, shown in some of the film’s most famous and dramatic scenes.

Violence prevails throughout the entire film, both inside and outside of the ring. Robert DeNiro is physically ferocious and this physicality makes for some spectacularly powerful and gritty violence.

When in the ring, the camera remains tight to the action and often focuses on the face of LaMotta and his respective opponent. The director combines the camera work with a plethora of unorthodox soundtrack devices to create an explosive atmosphere in the ring which can have you gritting your teeth at times. Open to the most base and dirty aspects of human combat, many camera shots show blood and water splat and squirt from the contorted faces of the fighters sometimes onto the surrounding audience!

A short, excellently arranged sequence in the middle of the film features several of Jake’s fights in his long campaign to becoming middleweight champion. This montage sees Jake duly knocking out several opponents edited amongst footage of his marriage and accumulations of material success. This fight sequence is punchy and entertaining as the film’s signature montage.

You never got me down Ray 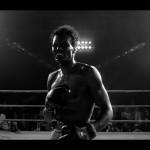 After becoming the middleweight champion an older Jake defends his title against rival Sugar Ray Robinson, in their third encounter. This is by far the film’s most exciting fight scene. Robinson, a much more skilled boxer, duly proceeds to batter Jake, who backs against the ropes and clings on. The camera lingers on Ray as he prepares to go in for the kill. In perhaps the film’s most iconic image, Jake stands glaring at Ray in return with no sign of fear despite the inevitable butchering which is about to occur. This is where we see the true power of the animal inside of him. The action becomes frantic; punches and blood are thrown in every direction with a backdrop of flashing lights and steam. After the beating, Jake defiantly tells his opponent: “You never got me down, Ray”, a line which has become the film’s most unforgettable.

Loved by many, “Raging Bull” is a classic fight movie. Many remember this as the best film of master director Martin Scorsese, as well as the best career performance of Robert DeNiro. The film manages to create a full-bodied, gripping, human story out of a man whose character consists of nothing more than deep rooted insecurities, insatiable desire and violent rage. Of all boxing films, perhaps even fight films, there seems to be nothing that resembles what “Raging Bull” achieved and is commemorated as one of cinema’s classics.

Jake in his most familiar setting

Im gonna take that dog and eat it for lunch