Bruce Lee’s Fighting Method is an invaluable martial arts reference work that details the techniques of self defence, training perception and the cultivation of physical manoeuvres.

Bruce Lee first began writing this book in the late 1960’s and the demonstration photos for the book were taken in 1967. Bruce wanted this to be a limited edition book of not more than 200 copies and to be used as a training manual for his Jeet Kune Do system.

After the photos were taken, Bruce changed his mind about the book and concentrated on his other endeavours. There are thoughts that Bruce was concerned that other instructors would use the knowledge within the book to help promote themselves and this contributed to him sidelining the book for a while.

In 1972 he started to sequence the pictures once more and it looked like he was working on the book again, however it was never released.

In 1978 the book was published in 4 parts as: Bruce Lee’s Fighting Method, Volumes 1-4. Each book was a bestseller and remained in print for some time.

In 2008 this hardback version was released, consolidating all 4 previous volumes and adding a section titled ‘Five Ways of Attack’ by Ted Wong. 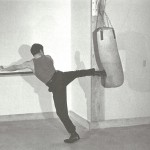 You would not want to be the bag

The book is impressive at first sight. It is a good size, being just under A4 page size, and over an inch thick. The cover photo is a great image of Bruce Lee in a strong pose.

When we open the book we get the first impression of how comprehensive it is, as the Index highlights the almost 500 pages of Bruce’s learnings contained within. The first items in the book are a foreword and an introduction. The foreword is written by Bruce’s daughter Shannon Lee, with an introduction by M. Uyehara.

We then enter the book with Part 1 containing 5 chapters all aimed at basic training. This part covers exercises, stances and footwork, as well as power and speed training. The 100 plus pages within Part 1 are filled with excellent pictures and advice on aerobic fitness, flexibility exercises, stances and balance. The chapter on footwork is particularly well displayed, with photos and line diagrams highlighting the correct placement of feet and explanation.

Part 2 is titled ‘Skill in Techniques’ and has chapter titles such as ‘Skill in Movement’, ‘Skill in Kicking’, ‘Parrying’, ‘ Targets’ and ‘Sparring’. Again, this part is filled with brilliant pictures of Bruce displaying and explaining a variety of techniques including trapping, hook kicks, spin kicks, feinting and parries.   I particularly enjoyed the section on targets to aim for, as well as the chapter on sparring. As highlighted in the book – Bruce Lee said “A fighter who trains without sparring is like a swimmer who hasn’t immersed in the water”.

Sometimes you just need to punch

Skipping is great for training

Next is Part 3, which is titled ‘Advanced Techniques’ and includes 2 chapters on hand techniques for offence, attacks with kicks, defence and counter moves, as well as tactics. Part 3 also includes the new section written by one of Bruce Lee’s students ‘Five Ways of Attack’ by Ted Wong. Once again this section is filled with clear and exciting photos, with plenty of explanation. The new section included in this volume by Ted Wong was added as in the later years of his life, Bruce Lee ‘Began to teach and make notes on combative techniques that he called the Five Ways of Attack’ and were ‘heavily influenced by Lee’s research into fencing’.

Finally we move to Part 4 titled ‘Self-Defensive Techniques’. This section contains some rich photos of Bruce Lee demonstrating self-defence techniques out on the street in late 60’s America, with cars and signs from the period in the background. It includes defensive moves against tackles, punches, grabs, chokes, armed attackers and multiple assailants. There are some great techniques on display including hair grabbing to help move an opponent. The last chapter is title ‘Defence from a Vulnerable Position’ and includes defences while you are sitting in a chair or lying down.

The book then closes with an index of techniques.

Kick to the face

This book is a fantastic consolidation of Bruce Lee’s fighting system. It is suitable for all levels of martial artist as it covers such a variety of beginner and advanced techniques. It is also suitable for any Bruce Lee fan, even those who have never trained in martial arts, as it provides so many great pictures of Bruce and his pupils, as well as great insights into his thoughts on how to fight.

While Bruce never finished this book and was published posthumously by Uyehara, you do get a great experience of his style.

Bruce wrote poetry and contributed many articles to martial arts publications. M. Uyehara’s was the founder and owner of ‘Black Belt Magazine’. Combining both of these talents provides us with a very well written book. The pictures are plentiful and they are fantastic.

I really enjoyed this book and would heartily recommend it to all fans of martial arts and without reservation to Kung Fu Kingdom readers!

‘One of the most neglected elements of martial arts is the physical workout. Too much time is spent on developing skill in techniques and not enough in physical participation. Practicing your skill in fighting is important, but so is maintaining your overall physical condition. Actually both are needed to be successful in a real fight. Training is a skill of disciplining your mind, developing your power and supplying endurance to your body.’

‘The two primary targets in fighting are the eyes and the groin, as in the photo A below. A solid groin blow can quickly incapacitate or even cause death to a man no matter how physically powerful he is. Even a light blow can render a man unconscious. Some martial arts call such a vicious blow too cruel and inhumane. But Bruce Lee always felt that your main purpose of learning the martial arts or self-defence arts is self-protection or self-preservation.’

‘The meaning of martial is warlike, he used to say ‘we are not in a game; it’s your life or his. And since you only have one life, take care of it the best you can’.’

‘The best defence against a surprise attack is not to be surprised. In other words, Bruce Lee always emphasised that a martial artist must constantly be aware of his surroundings. He must train to be cautious and alert at all times. He should never be caught napping before an attack.’