We’ve seen Jet Li vs Jet Li in “The One”, while Jackie Chan joined forces with his twin brother in “Twin Dragons”. We’ve gotten a double dose of Jean-Claude Van Damme not once, but twice with “Double Impact” and “Replicant”, while Arnold Schwarzenegger has made us see double thrice with “Last Action Hero”, “The 6th Day”, and “Terminator: Genisys”. With a track record like that, it was simply inevitable that the world would one day bear witness to Will Smith vs Will Smith, with “Gemini Man” materializing to fill that role.

Under the direction of Ang Lee, “Gemini Man” marks a return of sorts to martial arts action for the visionary director of “Crouching Tiger, Hidden Dragon”, while also arriving with the gimmick of being filmed at an unusually high frame rate of 120 frames per second.

Under Lee’s direction, the suspense is palpable and the stunt work, phenomenal; with the movie being home to several of the year’s home run action sequences, including the Will vs Will smackdown. Ultimately, however, “Gemini Man” is a true testimony to the versatility of Will Smith, who is called upon to play the same character at two separate points in his life simultaneously.

Henry Brogan has had about enough of his career as the U.S. Government’s most decorated assassin, but his ability to adjust to retirement is short-lived when he learns that he killed an innocent man on his last mission. Henry soon finds himself on the run alongside Danny, a fellow agent posing as a boat rental clerk to keep an eye on him.

Henry’s former superior, Clay Varris, head of the shadowy covert operations unit codenamed “Gemini”, deploys his trusted assassin “Junior” to take out Henry and Danny. However, as the two attempt to flee their pursuers and make sense of the situation, Henry is struck by a startling discovery – that “Junior” looks exactly like Henry did in his early 20’s.

De-aging techniques are growing noticeably more commonplace in action, sci-fi, and superhero movies, and “Gemini Man” does a convincing job of placing the contemporary Will Smith side-by-side with his younger self.

Aside from that, the high frame rate of 120 fps has been the other highly touted element of “Gemini Man”, even if the technical limitations of the average movie theater make it difficult for most moviegoers to find one able to fully take advantage of that. It also serves to highlight the curiously retro feel of “Gemini Man”.

With the script having spent the better part of two decades in development hell and bouncing from one-studio to another, “Gemini Man” feels like a relic of the era that gave the world the likes of “Face/Off” and “Air Force One”. Given how much that style of action filmmaking has fallen by the wayside, that’s not necessarily a bad thing, but it is perhaps the most curious aspect of “Gemini Man” that it does ultimately feel like a movie from Will Smith’s rise to megastardom rather than twenty years into it. 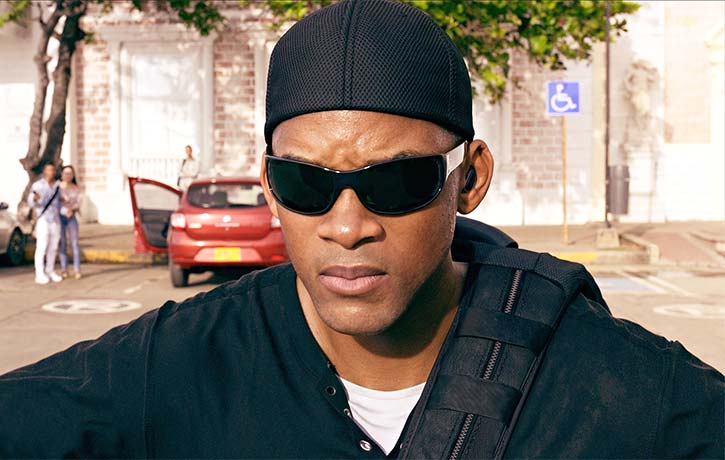 Junior shares a connection with Henry 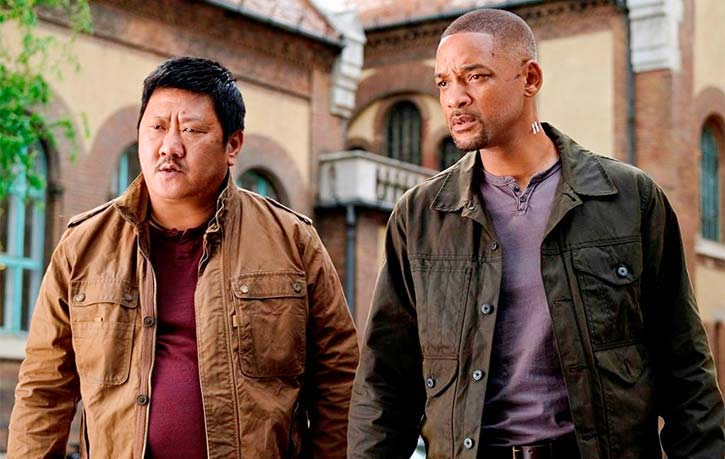 Will Smith and Benedict Wong in Gemini Man

Junior learns the truth about his origins

The stunts and action in “Gemini Man” are a world removed from the wire-fu of “Crouching Tiger, Hidden Dragon”, and they’re in very good hands indeed with J.J. Perry and Jeremy Marinas handling the fight work and stunt coordination.

That much is clearly seen in one of the year’s wildest chase scenes of Henry pursuing Junior by motorcycle (with a dash of Parkour thrown in) through the streets of Colombia when it first becomes clear there’s more to him than meets the eye.

If any doubt remains by the end that it’s earned its chase sequence bona fides, Junior destroys it in the act of quite literally roundhouse-kicking his target with the rear wheel of his bike. This sets up the centerpiece action scene of Henry battling Junior in an underground catacomb as a stunned Danny watches on. Danny is decidedly much more the brains of the operation here, but she also throws enough punches earlier on in the film to prime viewer’s anticipation for Winstead’s role as Huntress in next year’s “Birds of Prey”.

The “Battle of the Fresh Princes” hook would be quite the gimmick to live up to on its own, but the emotional stakes of Junior slowly discovering the nature of his origins gives it a greater impact. The battle is fast and dirty, with Henry and Junior surrounded on all sides by centuries’ old human skulls as they alternately kick and sweep one another.

The age difference between the two also really works, as if it’s a literal battle between father and son that it only symbolically is, while the audience has a rooting interest in both Henry and Junior making it out in one piece.

That emotional power further carries over into the climactic battle of the movie, in which Henry and Junior learn the full extent of the latter’s origins while doing their best to hold their own against a new Ninja-like adversary.

Henry is determined to uncover the truth about Junior

Henry is ready to leave his life of killing behind

With “Gemini Man”, Will Smith finally joins the pantheon of action stars of who have gotten the chance to have an epic showdown with themselves, while tugging at our tear ducts with two emotionally powerful performances for the price of one.

The action and stunts consistently deliver, while Ang Lee remains a master of blending triumph with tragedy with the not-entirely happy endings he’s known for. Be sure to also watch out for that pretty obvious “Fresh Prince” Easter Egg towards the end (although it’s not exactly an easy one to miss)!

Varris plots from the shadows

Henry and Danny are locked and loaded

Everything Junior believed has been shattered

Have you seen “Gemini Man”? What are your thoughts on the film’s notable stunts and fighting action? Which Hollywood megastars, male or female, would you love to see use more authentic martial arts fighting styles within their roles? And what would you like to see Ang Lee pull off in his next action film? Let us know in the comments below; Like, share and join in the conversation on Facebook and follow us on Twitter & Instagram.

You a GEMINI, MAN? Raise your performance to new, stellar heights by connecting to the FUniverse of movie reviews, exclusive interviews, Top 5’s, Top 10’s, give off a new vibe in KFK Official Gear, and subscribe for more out-of-this-world action on YouTube!