The basic B-movie charm that anyone who grew up in the 90’s knows well makes up the DNA of “Breathing Fire”. With dated cinematography and one very noticeable technical issue that regularly rears its head, “Breathing Fire” isn’t strictly speaking “high art”, but lovers of action will nevertheless walk away more than happy with what it has to offer.

For Charlie and Tony Moore, their biggest victory of the day is winning a local Taekwondo tournament, qualifying them both for the upcoming national tournament. Little do they suspect that, at that very moment, their father Michael is conducting a bank heist with the reluctant help of the bank’s manager, Peter Stern. 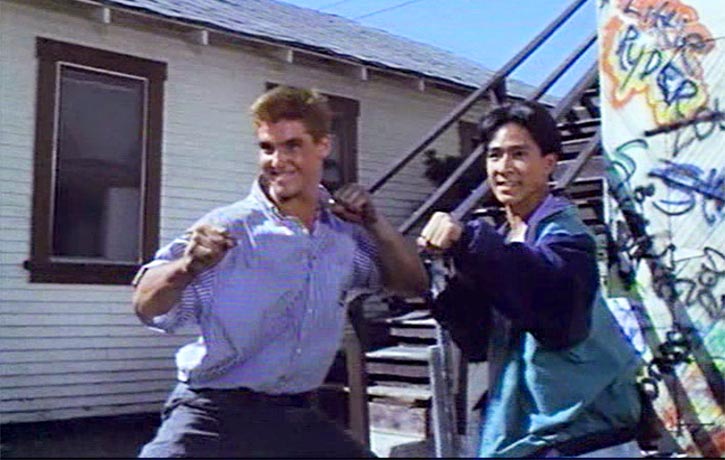 Charlie and Tony fight side by side 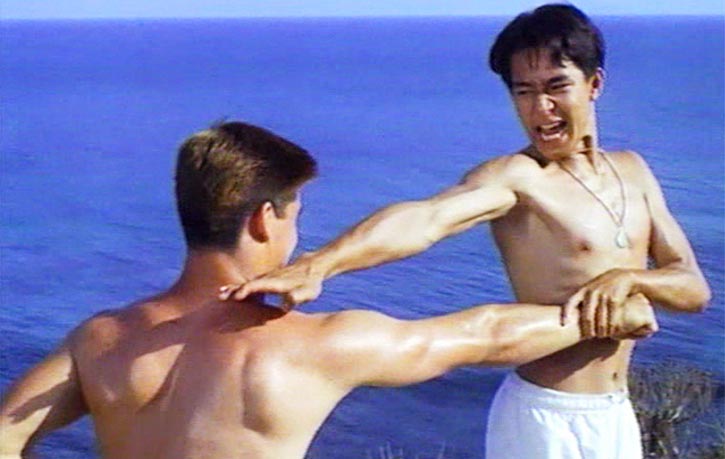 David has a different use for beer bottles 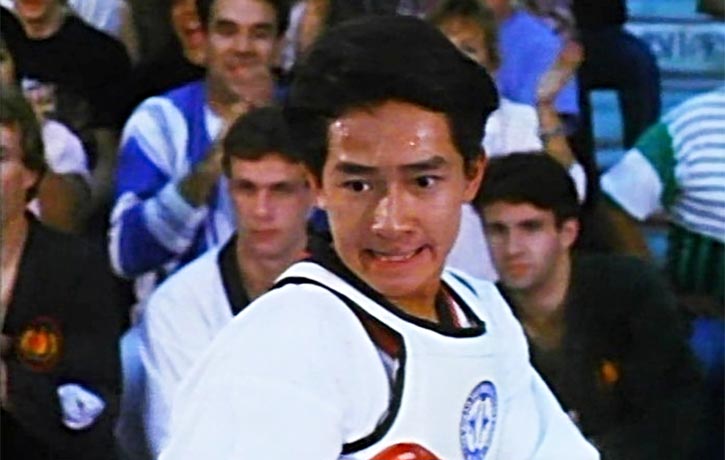 Tension rises at the tournament

After placing the loot in a safe, Michael and his gang create a mold of the keys in plastic pizza, before destroying the keys to maintain the loyalty among themselves. However, Peter attempts to back out of the plot, leading Michael and the gang to attack and kill him at his home.

Peter’s terrified daughter Annie flees to her father’s old friend and Michael’s brother, David, who agrees to protect her until the situation is resolved. However, Michael is determined to retrieve the missing slice of the key mold, which ultimately brings Charlie and Tony into the conflict. On top of that, Charlie’s efforts to uncover the truth about his adoption from Vietnam carry a dark secret into Michael’s past.

If you grew up during the 90’s fecund era of straight-to-VHS martial arts flicks headlined by professional kickboxers, you can tell that “Breathing Fire” has “B-movie” written all over it. That much is certainly safe to surmise when safety mats are clearly visible no fewer than three times in your 90-minute long criminal caper.

But technical shortcomings aside, “Breathing Fire” also has the kind of self-effacing magic that can only be found in the kind of low-budget action movies produced by Roger Corman, PM Entertainment, or in this case, Imperial Entertainment. 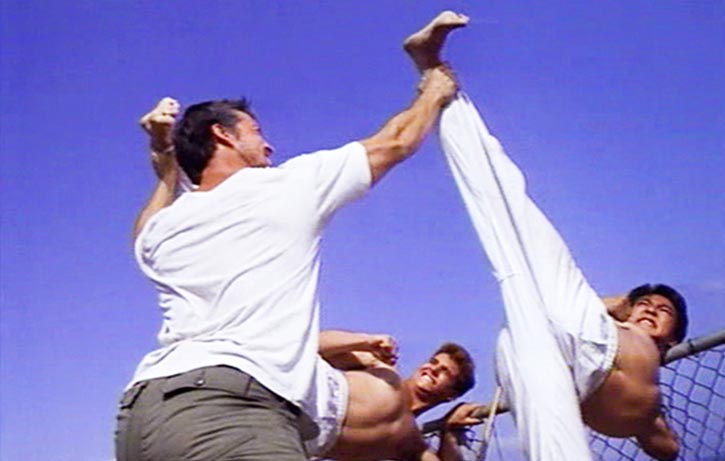 Charlie and Tony reach their next level of training

David channels the Eye of the Tiger

Jerry Trimble had only just started to make the leap from the ring to the screen with the release of “Breathing Fire”, and he’s simply astonishing when he leaps into action in the bank heist. However, it’s really Ed Neil who steals the first half of the movie as David Moore.

The film presents David as a somewhat more grizzled update on Beggar So, a hardened Vietnam vet who rolls out of bed surrounded by empty beer bottles when Annie comes seeking help.

When Michael’s gang arrives, David flips the switch to fighting machine to gracefully clean house. After David’s second battle with Annie’s pursuers on Michael’s lawn, with a little help from Charlie and Tony, he’s unquestionably become the star of the movie, especially once he’s gone head-to-head with the massive Thunder, played by Bolo Yeung.

However, “Breathing Fire” takes the rarely explored left turn of putting the film’s kung fu MVP on the bench after David’s leg is badly injured in a nightclub brawl with a disguised Michael. And as we see in the movie’s second half, that’s with the aim of putting the spotlight on the movie’s younger heroes. 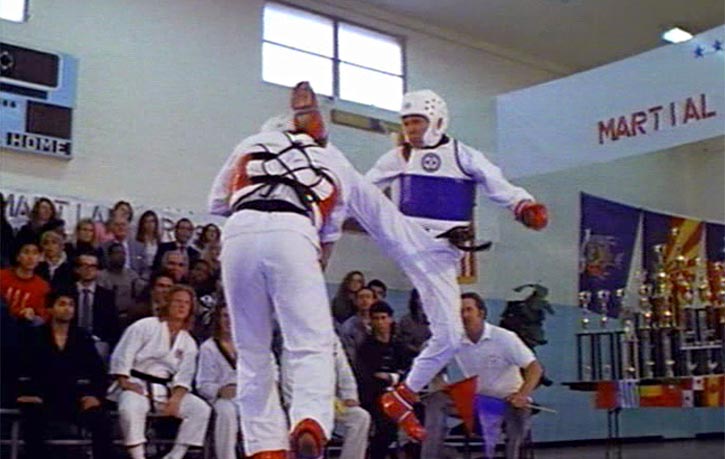 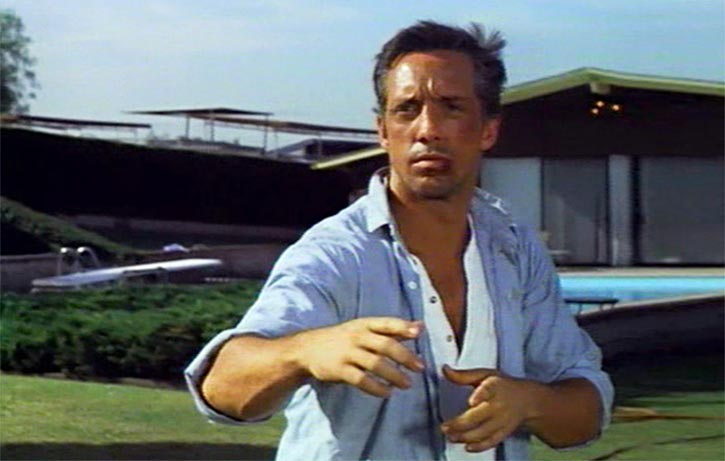 “Breathing Fire” already sets its focus on Charlie and Tony from the start in the opening taekwondo tournament, but they’re fully front and center when the injured uncle agrees to pass on his knowledge to them to protect Annie.

Training sequences are a dime a dozen in martial arts films, but “Breathing Fire” really nails its montage of Charlie and Tony strengthening their shins on bricks and glass bottles and breaking watermelons with their bare hands (it’s also where one of those three aforementioned safety mats pop up, but hey, c’est la vie).

As Charlie and Tony investigate Annie’s pursuers, the tone does admittedly become a little uneven. While their battles with a gang of dwarf mafiosos and match-up with the bumbling Tank take a more comedic tone, the film shifts into much darker territory in its final twenty minutes, with a physically and emotionally brutal final showdown in an abandoned factory where Charlie finally discovers the truth of his mother’s demise in Vietnam.

While the tone shift is slightly jarring, the movie devotes nearly the entirety of the sharpest martial arts action it has to offer wrapped up in some genuine emotional potency. Then there’s the karmic wrap-around on the tournament circuit that brings our two young heroes to the moment of truth as brothers. 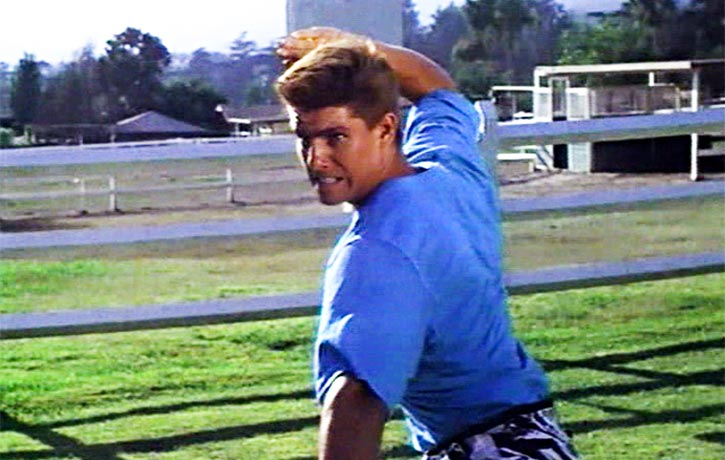 Tony is ready for anything 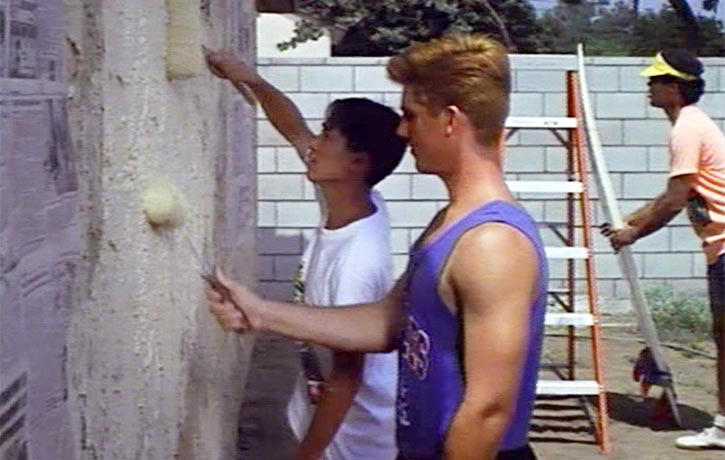 Charlie and Tony get hit with some extra chores

While “Breathing Fire” isn’t exactly a monument to the art of cinema, it does know what its capable of and what its audience is in for, delivering the goods on both counts.

Neil is at once mentor and action star, and his fight scenes in the first half are so well done that it feels like a loss of a true great when he’s forced onto crutches, while Jerry Trimble is equally stunning.

However, the true heart of the film is Jonathan Ke Quan and Eddie Saavedra as the two adoptive brothers and up-and-coming martial arts champs you can’t help but root for. “Breathing Fire” isn’t without its technical gaffes, and it’s a B-movie through and through, but that doesn’t at all hold it back from being an enjoyable one. 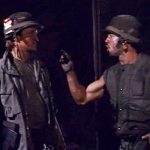 Back in Vietnam David insisted Michael take responsibilty for Charlie

Charlie and Tony perplexed by their opponents battle strategy

The heist is underway

Charlie and Tony are ready to roll

Charlie gets the drop on Michael

Tony trains for the tournament

Charlie and Tony are true brothers

Charlie and Tony are true brothers

Charlie gets the drop on Michael

Charlie and Tony are ready to roll

Tony trains for the tournament

The heist is underway

Charlie and Tony perplexed by their opponents battle strategy

Back in Vietnam David insisted Michael take responsibilty for Charlie

Do you remember “Breathing Fire”? What are your thoughts on the film’s excellent martial arts action and coming of age story? What are your favourite Bolo Yeung and Jerry “Golden Boy” Trimble fight scenes that you can recall? Let us know in the comments below; Like, share and join in the conversation on Facebook and follow us on Twitter & Instagram.