Why have one Jean-Claude Van Damme in a movie when you can have two? Double the action, double the Dammage in the Muscles from Brussels’ big-screen outing!

Jean-Claude Van Damme plays estranged twin brothers Chad and Alex, separated at birth and leading completely differently lives on two continents. Chad is a well to do pampered dance/karate instructor in Beverly Hills managed and raised by his guardian Frank Avery played by the late Geoffrey Lewis. Alex was left at a convent in Hong Kong and grew up on the streets. His tough upbringing sees him working as a hardened smuggler.

The muscles from Brussels is well armed

Chad and Moon square off

Chad and Alex Wagner, twin brothers unaware of the other’s existence are reunited by Frank Avery, a street-smart former Vietnam veteran and bodyguard to the brothers’ parents before they were gunned-down by a Triad hit team lead by Raymond Zhang. When the twins realise the truth, they work with Frank to exact their revenge against Zhang and businessman Nigel Griffith to restore their parents’ honour and continue their legacy.

Believe it or not “Double Impact” was a game changer for Van Damme with tag lines inviting audiences to “Feel the Impact”. This was his biggest project in every respect; he not only starred (in dual roles) but co-wrote the script with director Sheldon Lettich, signed on as co-producer and even choreographed some of the fight action. The film was backed by Stone Group Pictures, Michael Douglas’ (yes THAT Michael Douglas’) production company. Ultimately it ushered Van Damme’s transition from B-release video star to major league action hero. With such financial hustle behind the muscle from Brussels, did we all feel the impact?

The action is an explosive mix of Van Damme’s special brand of hand-to-foot combat, along with plenty of John Woo-esque balletic gun-fu, all expertly staged by legendary stunt coordinator Vic Armstrong. It gives the western audience their first big-screen look at Hong Kong-style action since “Enter the Dragon”. From Chad’s first real fight against Zhang’s heavies including Bolo (the ‘Chinese Hulk’) Yeung as Moon, to the epic finale on board a freighter, fight choreographer Peter Malota keeps the fight action short and sharp, like a knockdown in karate which whilst leaving us wanting a little more is ideally suited to the film’s pace.

Chad dishes out a tough lesson 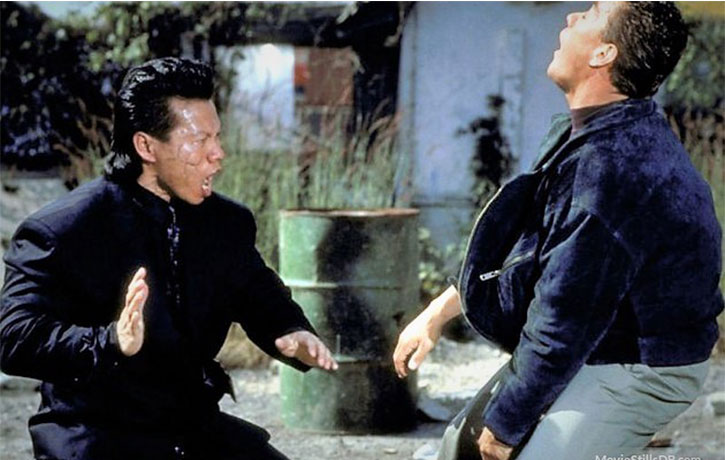 As always, films like these need to feature some colourful henchmen and Bolo’s presence alone makes as much of an impact as his open-handed strikes. Cory Everson seems to relish her role having fun playfully taunting her victims before unleashing some deadly skills. Even Malota shows up as a heavy who puts razor sharp spurs tacked to his heel to deadly use with some slick-looking spin kicks.

However, the spotlight belongs to its star and Van Damme doesn’t disappoint; altering his moves to suit the brother’s contrasting fighting styles. Van Damme and Malota pack in as many of his signature moves as possible including signature box splits and stunning kicks; each bone crunching blow packing a stylish wallop.

It all comes together for some hotly anticipated scenes like the brother vs brother match-up packed with tension that had been bubbling-up like a pressure cooker between these chalk and cheese personalities, delivers one of the film’s high points. The finale on board the freighter brings all the explosive kick-butt action fun together with the brothers’ cinematic tag-team saving the day.

Frank and Chad have a meeting

Danielle and Alex experience some tension

Chad is ready for trouble

Alex isnt the guy to mess with

“Double Impact” is pure popcorn cinema action entertainment at its best with an impressive dual performance from Van Damme. Explosive action and some stylish martial arts fight fun interspersed between the film’s revenge plot keeps the film moving at a brisk pace with enough humour (mainly the two brothers’ bickering) to lighten the mood. The balance of fun and thrills still make this one of Van Damme’s slickest films up to this point.

For the star it presented his toughest acting and action challenge; playing two brothers who’ve led very diametrically opposite lives that shaped their characters, and Van Damme rises to the challenge with aplomb. As Chad his fighting style matches his personality, his kicks are as flashy as his fashion sense indicative of a man whose fighting experience is confined to the dojo. Alex on the other hand, is toughness personified so tough he can break a whiskey glass in his hand. One is a graceful karateka the other a balls-to-the-wall streetfighter, and Van Damme clearly had more fun playing the latter.

Fight fans might be left wanting to see more kick-butt fight fun but what’s on offer here is well -staged and stylish, with Van Damme doing what he’s best at contrasted with some colourful villains showing some deadly skill upping the danger factor for our hero. Some 26 years later, it hasn’t really lost any appeal proving just as amusing and action-packed as when it first impacted our cinema screens!

What do you think of “Double Impact”?  Which of Jean-Claude Van Damme’s movies resonate with you the most? Let us know in the comments below, join in the conversation on Facebook and follow us on Twitter (why not check out our previous Van Damme articles and reviews)!