When you talk about action movies that go all in with how much they intend to push the envelope, titles like “The Night Comes For Us”, “Headshot”, or “Logan” tend to come up as movies that make no apology for how many gallons of blood they spill. “The Princess Blade”, however, is cut from a different cloth. A futuristic re-imaging of the manga “Lady Snowblood” released in Japan as “Shurayuki-hime”, “The Princess Blade” doesn’t hesitate to unleash all manner of bloody carnage in its abundant katana-based action scenes. However, it’s also an undeniably beautiful movie that balances its bleak tone with stunning cinematography and fight sequences crafted to perfection by the one and only Donnie Yen!

500 years in the future, Japan has returned to feudal rule, with a band of assassins known as “Takemikazuchi” employed to suppress the ongoing rebellion.

On the eve of her twentieth birthday, the up-and-coming assassin, Yuki, learns that the current leader of the clan, Byakurai, murdered her mother Azora to assume control of the Takemikazuchi. However, Yuki’s decision to take revenge sees her barely escape with her life after battling Byakurai and seeking refuge in a gas station run by Takashi. 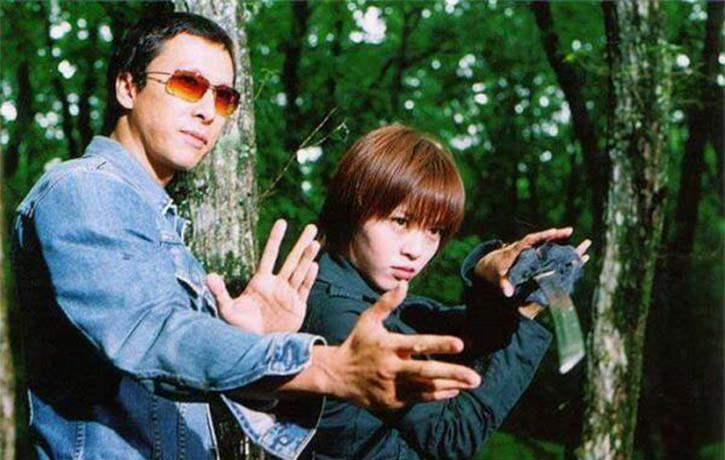 Yuki begins to build a new life with Takashi and Aya

Although Yuki has escaped for the time being, the Takemikazuchi’s determined pursuit of a former member guilty of sedition and Takashi’s connection to the rebellion ensures that Yuki will eventually be forced to take up her sword once more.

As is often the case for Japanese action movies, “The Princess Blade” holds nothing back, so much so that it feels like director, Shinsuke Sato, essentially made “The Raid” with katanas a decade in advance.

From the very first frame, the tone of the movie is somber, sorrowful, and at points even downright cruel, while the action is both mesmerizing and savage. While there aren’t literal fountains of blood spray from every open wound a la “Kill Bill”, the sword combat is nevertheless incredibly visceral, and in some ways, even more hard-hitting than The Bride’s Tokyo nightclub slash-a-thon.

Yuki clings to the memory of her mother

Yuki learns the truth about Byakurai

Tough journey ahead for Yuki

By keeping the action grounded in a greater sense of realism, “The Princess Blade” is incredibly wince-worthy, with characters getting a hand slowly impaled into the ground one moment and a shoulder sliced open like a pumpkin the next. However, Sato also levels off the dark tone of the film with a measure of tenderness in Yuki’s memories of her mother and her burgeoning romance with Takashi. At the same time, the brutally harsh action scenes, in and of themselves are also gorgeous symphonies – viewers have Donnie Yen to thank for that.

Under Donnie’s action direction, the petite and stone-faced Yumiko Shaku is genuinely believable as a true killing machine, with her initial meeting with the suspicious Takashi being thoroughly satisfying in how she retrieves her sword from her would-be captor.

The movie also puts Princess Yuki through just as much pain as anyone else, especially when her former comrades catch up to the AWOL assassin. However, the peaceful, wintry forest setting (that most of the action takes place in) gives “The Princess Blade” a contrarian feeling of beauty even in its most brutal moments.

Yuki takes out two opponents for the price of one

Yuki’s stand-off with her former allies is a real marvel at that balancing act, with our heroine slicing her enemies like an office shredder. Her final confrontation with Byakurai is also where the movie’s blend of beauty and viciousness in both the tone and the action comes home to roost. Here, Yuki rises to the occasion as a sword-wielding warrior while life both giveth and taketh away.

“The Princess Blade” is as stunning in its action as it is in its emotional power, without compromising its bluntness. The movie tugs at your heart strings with its melancholy tone and Yumiko Shaku’s performance as a vengeance-minded warrior still yearning for her freedom.

At the same time, Donnie Yen’s direction of the fight sequences is so astonishing that it’s frankly amazing that this film isn’t mentioned more often among his innovations in martial arts action design.

Light on levity, high on brutality, and loaded with a convincing powerhouse of emotional weight, “The Princess Blade” is an absolute must-see for aficionados of Japanese action who also won’t mind shedding a tear or two.

Turning up the sword speed

Yuki ponders her next step

Yukis quest for vengeance is perilous

The Takemikazuchi prepare to strike

Byakurai wont go down without a fight

Whether you’re a warrior Prince or Princess, swing your sword like you mean it and ENTER a FUniverse of more action; Top 5’s, Top 10’s, exclusive interviews, get forensic with your choice of KFK Offcial Gear, and subscribe for more fightronic action on YouTube!)