With Lethal Weapon 4 and Romeo Must Die under his belt, Jet Li continued breaking through the Hollywood scene and took on a unique role in the sci-fi martial arts film “The One”. Directed by James Wong, “The One” is a highlight in Jet Li’s filmography and career as it features Jet Li portraying both the hero and the villain.

Touching on the idea of a multiverse, “The One” stars Jet Li as a Superman-Bizarro-like pair of roles as protagonist Gabriel “Gabe” Law, a Los Angeles sheriff deputy and antagonist Gabriel Yulaw, Law’s sadistic alter ego from another universe. “Spy Kids” star Carla Gugino is Law’s wife TK Law. “Romeo Must Die” co-star Delroy Lindo is Multiverse Authority (MVA) agent Harry Rodecker. Before he was Frank Martin in “The Transporter”, Arthur Bishop in the Mechanic films, or even Lee Christman in “The Expendables”, Jason Statham played a crucial role in “The One” as Rodecker’s partner Evan Funsch, who eventually became Law’s ally.

The new king of the underworld

A battle of arms

L.A sheriff deputy Gabriel “Gabe” Law has been experiencing strange and sudden increases in strength, speed and mental intellect over the past two years. He has also sensed an unknown assailant pursuing his whereabouts, only to realize that the assailant is a sinister version ofhimself, known as former Multiverse Authority (MVA) officer-turned fugitive and serial killer Gabriel Yulaw, who is determined to become the immortal deity known as “The One” by travelling across universes and killing all 124 alternate versions of himself. Now questioning his own perception of reality, Law must fight and defeat Yulaw.

Prepare for a motorbike smash sandwich

The action in “The One” is well-done. Despite some special effects and apparently excessive wire work that make the combat look unrealistic, it is worth keeping in mind that they were probably much-needed for a fantasy science fiction film like this. They still properly accommodate Law and Yulaw’s incredible strengths due to Yulaw’s killing of and life absorption of his alternative selves.

More importantly, choreographer Corey Yuen takes a brilliant approach to the fights by touching on the concept of Yin-Yang and having Gabe and Yulaw practice distinct martial arts styles that represent their respective personalities. Specifically, Gabe Law uses Baguazhang,which is defined by passive, circular movements, while Yulaw uses Xing Yi, which is marked by its aggressive, linear movements.

Law is up for Round 2

Yulaw is down for seconds

Similarly, Gabe is a man who tries to keep his cool throughout. Yulaw, on the other hand is shown to be aggressive and direct, displaying an extreme determination to become ‘The One’ as well as an indifference toward those he hurts,especially in combat. Every move Yulaw throws carries an aura of ruthlessness, and once he is finished, he leaves with a stone cold look on his face. Not once does he look back, nor show signs of remorse. The beginning of the film pits Yulaw against the L.A.P.D. after he kills Lawless, a variation of himself.

When this fight kicks off with the song “Let the Bodies Hit the Floor” playing in the background, the word “trouble” is immediately spelled, and Yulaw comes out of his shell to disarm an officer with a swift spin kick and knock him down with a hard punch. Yulaw then uses the officer as a shield against other officers shooting at him, with bullets moving in slow-mo as if you’re watching a scene from “The Matrix”. Yulaw proceeds to make quick work of the rest of the gang, and even kicks an officer out of his way like a soccer ball.

Yulaw disarms a police officer with a spin kick

Yulaw with hands of steel

As the film progress, so do Yulaw’s ruthless tendencies. At one point he intercepts Delroy Lindo’s punch with his chin, breaking Lindo’s hand in the process. Later, we see Yulaw demonstrating his superior strength as he holds one motorbike in each hand and sandwiches a police officer between them! Any way you cut it, Gabriel Yulaw is that evil twin worthy of being a Marvel or DC super villain.

When it comes down to “The One”, fans would undoubtedly and most highly anticipate the warehouse showdown between Jet Li and, er… Jet Li. It’s not every day you would see an action star in a mirror match, and even though Jet Li claimed that taking on multiple roles was a challenge, the good, I mean great, news is that this Jet Li vs Evil Jet Li battle is pretty remarkable.

A Battle for Supremacy

Battle of the Yin Yang twins

Gabriel Yulaw on trial for 123 counts of first degree murder

With Gabe and Yulaw throwing hard, yet swift and graceful hits and staying true to their respective styles, this fight is an all-out classic kung fu fight in a modern sci-fi setting that begins as just a rough exchange of blows only to escalate such that machinery is damaged and sparks do quite literally fly. If I were to choose a fight scene from another martial arts sci-fi film that could compare with this fight for an accolade, then it would be the dojo fight scene in the original Matrix.

This epic Gabe vs Yulaw showdown isn’t the last fight we’re going to see either, however. Right when Yulaw is sent to the underworld, before the ending credits roll comes a brief but enjoyable battle for supremacy as he fights his way to the top of a pyramid, forever claiming that he will become ‘The One’. 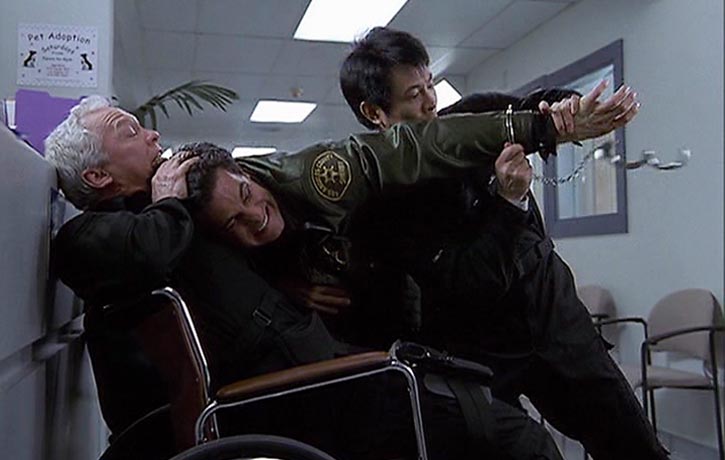 When you need a wheelchair for support

Its all about to get lit up

“The One” (ahem) thing you can say about “The One” is that it certainly offers something uniquely (albeit at times cringe worthily!) entertaining. Implementing the interesting concept of Yin Yang in the action and boasting a memorable and noteworthy duel between bipolar twins, “The One” is a film that Jet Li fans should check out. 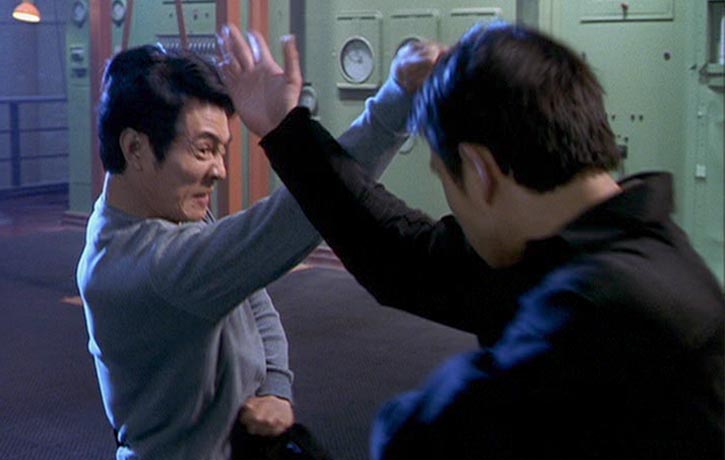 Yulaw reigns supreme in the Underworld