Martial Art of the Month: Ninjutsu

This month we look to uncover the secrets of the Ninja, clandestine martial warriors whose exceptional skills in guerrilla warfare and espionage made them the most feared killers in feudal Japan. Today the modern Ninja is a very different creature, one descended into cinematic legend while its practitioners practice the art as a way of life. Come with us as we creep up and take a peek behind the mask of Ninjutsu.

“Ninjutsu” (忍術) refers to the art of stealth (or stealing) so naturally its history would be concealed in the shadows. It is thought to have originated from the Yamabushi, a group of Chinese philosophers escaping persecution of the Royal Court of the Sui Dynasty. Fleeing to Japan in 593 AD they settled in the remote locations of Iga and Koga and lived in isolation as hermits – hence the name Yamabushi. Over the centuries the Yamabushi practiced and passed down their meditative practices and knowledge of warfare (based on Sun Tzu’s “Art of War”) and fighting to their descendants. 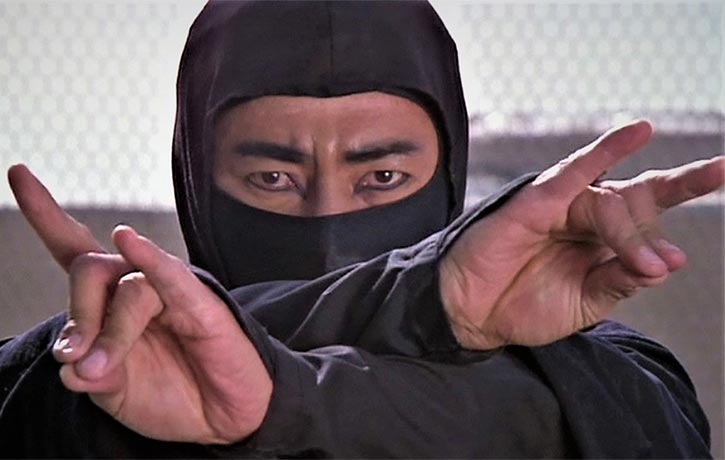 Ninja invoking one of the 9 symbols of power

By the 14th Century the Shinobi, as they became known, formed into 50 clans with their own specialisms; the Koto clan specialised in Kosshijutsu (the art of bone breaking), the Fudo clan developed the deadly Shuriken (throwing star) and the Togakure were experts with the Shuko (spiked glove). At this time the clans were ruled by Hanzo Hattori who forged them all into a single brotherhood specialising in assassination and espionage.

The Ninja struck fear in the echelons of the Samurai hierarchy, and so using this to their advantage the Ninja came out of isolation and attempted to seize power. A military force commanded by General Oda Nobunaga drove the Ninja back to their regions and a war ensued. When Nobunaga was assassinated, his son Tokugawa Ieyasu brokered a peace deal with Hattori. For the next 250 years the Ninja remained in isolation but were used by the Samurai as a security force, and assassins for hire.

Ninjutsu is not so much a martial art with its own set of techniques but rather a preserved working system of knowledge that brings together a variety of fighting systems under one roof. It certainly wasn’t an all-encompassing label used by the Ninja in their day. As well as self-defence the modern “Ninja” walks a path with an esoteric destination focused on meditation whilst using their art as a positive force. 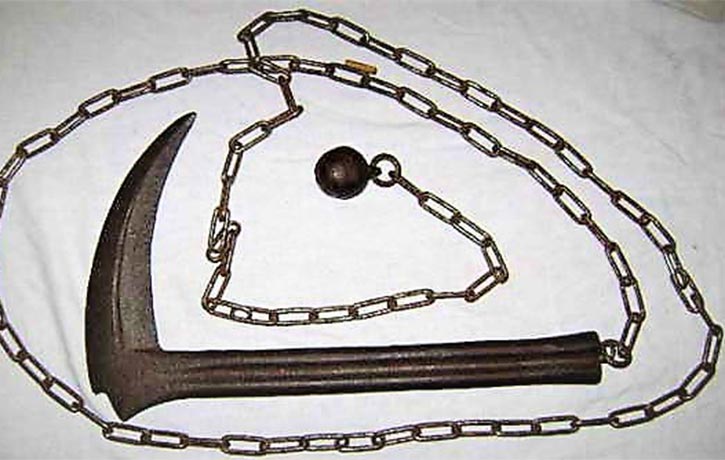 Another example of Kuji kiri

Getting to the point with a Shuriken

Gyokko Ryu – teaches a combination of Bojutsu (staff) Kenjutsu, Kosshijutsu (the art of bone breaking) and Shitojutsu (using digits or fingers) for striking.

Koto Ryu – an unarmed combat style focusing on using larger bones to strike the weaker ones of an opponent. It involves the study and practice of 50 kata including a ‘muto dori kata’ using empty hands against a sword.

Sho Kosugi plays a ninja in Pray for Death

Togakure – the oldest of the streams, this focuses on Kenjutsu, Shukojutsu (the claw or spiked gloves), the throwing of Shuriken and powder bombs and the art of moving undetected.

Although there are some off-shoots and break away schools, Ninjutsu is promoted and taught in three main dojos: Bujinkan (established by Dr Maasaki Hatsumi), Genbukan (headed by Shoto Tanemura) and Jinenkan (headed by Fumio Manaka).

Anyone who’s watched enough ninja movies should recognise the Kuji-kiri. It’s an all too familiar scene featuring the two black-clad warriors sitting opposite each other changing and tying their fingers in knots. This is essentially a technique thought to enable the ninja to call upon a supernatural power fit for purpose, so for example to invoke healing powers the ninja would make the sign of “Sha”. It is in fact more of a meditative power symbol (akin to hand gestures known as ‘mudras’ in Sanskrit) triggering a concentrated mental state enabling a ninja to function effectively under unusual stress or trigger a transcendent or unlimited mindset.

Practitioners you may know

Everyone’s favourite on-screen ninja is a practitioner of Ninjutsu, having studied under Master Yamamoto when he was 12 years old. Since Ninjutsu is a discipline that involves the practice of many arts Kosugi also holds Dan rankings in Shindo Jinen-Ryu Karate, Kendo, Judo, Iaido, Kobudo (Okinawan Weapons) and Aikido. From the television series “The Master” to Cannon films’ “Ninja Trilogy” Kosugi has become synonymous with the ninja phenomenon, whether as the villain or hero (as in “Revenge of the Ninja”). His steely charisma coupled with his solid ability increased Ninjutsu’s popularity sending eager ninja wannabes searching for a master.

With his purple rinse hair and non-standoffish demeanour Dr Hatsumi is one of Ninjutsu’s more colourful characters described by Black Belt Magazine as “wildly funny and unpredictable”. He is also the highly respected Soke (headmaster) of the Bujinkan dojo in Noda, Japan and student of Shidoshi (director/mentor) Toshitugu Takamatsu. The young Maasaki studied Judo and Kobudo at university but at age 26, sought out Shidoshi Takamatsu spending 15 years on Honshu Island training in Ninjutsu. Maasaki broke away from the traditional forms to focus on teaching the application of techniques in real-life situations. He was voted 1986 Instructor of the Year by Black Belt Magazine.

A student of Dr Hatsumi, Stephen Hayes is the real American Ninja, and one of the most cited authorities on the system and its history. Throughout the 70’s and 80’s, Hayes travelled the world to teach students and has written numerous books on the subject. In 1997 Hayes broke away from the Bujinkan dojo to set up his own system and school known as To-Shin Do adopting the title An-shu (custodian of the spiritual inn). Like his master, An-shu Hayes felt the Ninjutsu system needed to evolve for the modern era whilst still maintaining its esoteric values. Working with his second in command Mark “Sentoshi” Russo, An-shu Hayes teaches To-Shin Do through his ‘Quest’ dojos around the world.

We’ve all seen the news footage from Iran featuring women performing incredible feats and training in the art of Ninjutsu. It was a misconception that they were a highly trained attack force ready to wage holy war, a rumour Sensei Akbar Faraji was keen to dispel. Faraji Sensei studied Bujikan Ninjutsu for over 30 years and opened his own dojo in the country’s capital, Tehran. Faraji Sensei opened his doors to both men and women inviting them to train together. This has certainly proved popular amongst women instilling in them confidence, a positive in and out-look as well as a way of keeping fit and learning self-defence.

What do you think of Ninjutsu as a martial art form, which on-screen ninja heroes do you resonate with? Let us know in the comments below, join in the conversation on Facebook and follow us on Twitter (Be sure to check out our previous martial arts of the month too!)