Everyone’s favorite kneecapping, defaulter-pursuing buddy-movie duo is back in action with “Debt Collectors”. Once again under the direction of Jesse Johnson, “Debt Collectors” builds on the dark humor and more personal stakes of 2018’s “The Debt Collector” for another wild ride of both verbal and actual sparring.

As French and Sue pound the pavement once more, their second journey takes them on an even deeper dive both inward and outward in the middle of a lot of rapid-fire banter and knuckle sandwiches.

Scott Adkins and Louis Mandylor are back as the debt-collecting dynamic duo French and Sue, with Vladimir Kulich once again portraying the ruthless Tommy. Marina Sirtis also portrays Mal Reese, while Mayling Ng steps into the role of tough-as-nails Britt.

Ski Carr also appears as the shadowy villain Molly, with Josef Cannon and Jermaine Jacox playing Evo and Darius, a pair of gangsters tasked with keeping tabs on French and Sue, while 80’s action lovers will also want to watch out for Vernon Wells as Cyrus Skinner.

Intimidation Rising: Get Your Boss!

Despite both French and Sue being riddled with bullets at the end of “The Debt Collector”, both recovered from their brush with death and are back to their day-to-day efforts to get by.

French has taken up a job a bouncer, but his latest violent skirmish with unruly patrons results in him being shown the door. Sue had strolled into the club just moments earlier, and recognizing that French needs a quick buck, invites him to tag along once again on his latest job of collecting debts from three defaulters.

With the gig taking them to Las Vegas, French saddles up with Sue once more, whilst the job brings them into contact with some familiar faces from Sue’s past.

French and Sue arrive for another shakedown

“The Debt Collector” ended on a note of leaving its audience to feel as if they’d had a bucket of freezing water dumped into their laps.

However, when a buddy movie duo’s chemistry is as undeniably strong as that of French and Sue, being riddled with bullets simply isn’t enough to slam the brakes on a part two.

Both Still Alive? Yes, with Plenty More in the Tank!

“Debt Collectors” is so unconcerned with giving a comprehensive rundown of their survival that the movie devotes its opening to French’s brawl with a rowdy gang in a bar in his current gig as a bouncer as Sue walks in, as if it just assumes we knew they made it out alive.

When French and Sue catch up afterwards, the film all but waves its hand in explaining French and Sue’s survival, clearly eager to jump back into our heroes’ trading one-liners and shaking down delinquent borrowers.

Just another day at Tommys

Time to glove up

Where that kind of indifference to details of life and death wouldn’t slide in other action movies, “Debt Collectors” is acutely aware of how well French and Sue, just being on the daily grind, works, and going any deeper than “they made it to the E.R. and lived to see tomorrow” would just be a redundant waste of time.

As with its predecessor, the fights in “Debt Collectors” are darkly comedic and more about just getting an occupational vexation out of the way than the likes of “Avengement” or “Triple Threat”, which is the exact characteristic that makes French and Sue’s small scale adventures so much fun.

French plots his next move

Sue gets to throw hands

French and Sue stepping into a boxing gym is “Debt Collectors” at its most light-hearted and turns the old “Boxing vs MMA” debate into an actual plot element of the film. For as entertaining a set piece that it proves to be, even that doesn’t equal the movie’s alleyway smackdown.

French and Sue Throw (Each Other) Down!

Keeping spoilers to a minimum, suffice to say that it’s the single best action scene in either of the Debt Collector movies and probably 2020’s most harrowing and hilarious exchange of fisticuffs thus far. It’s also where the movie takes a turn to really put French and Sue to the test in the final act in a way they haven’t been tested before.

Sue especially is someone you can’t help but enthusiastically cheer for as he heads into the lion’s den once more, and if a spray of bullets was violently harsh in “The Debt Collector”, you can rest assured that the climax of “Debt Collectors” hardly gets anywhere close to frugal in the pain department.

Scott Adkins always in shape and ready to spar

“Debt Collectors” cuts straight to the chase with two anti-heroes on their latest gig of chasing down defaulters for a quick payday.

Its predecessor may have left them at death’s door, but their superb chemistry brought them back before any surgeon did. That’s the only diagnosis necessary to know they’re alive and literally kicking once more. With “Debt Collectors” so heavy on the latter with a generous helping of profanity-laced quipping, all viewers need to do is just throw their feet up and enjoy the ride!

French tags along with Sue for one last gig

Molly has one vicious gangster rep

Britt knows how to stare people down

Evo and Darius keep tabs on French and Sue

French cops the flak on his new set of wheels

Look who dropped in out of nowhere 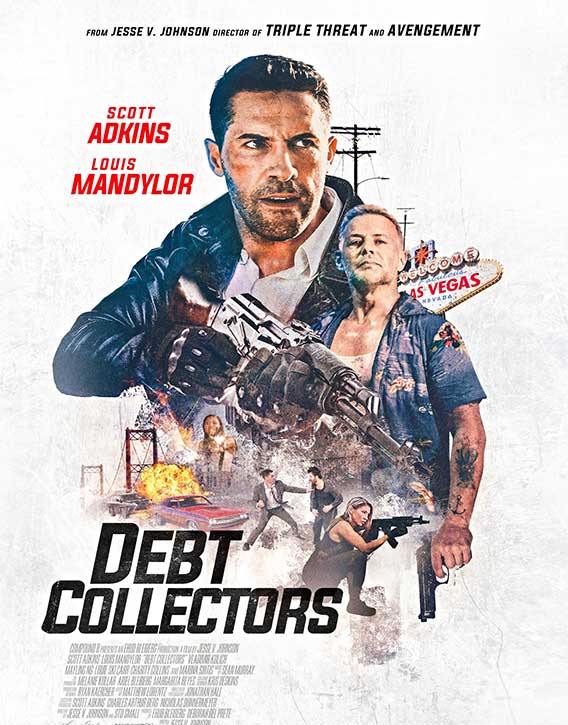 “Debt Collectors” is now available in the USA to stream via Video On Demand platforms, CATCH IT ON AMAZON NOW! Drops in the UK, 8th June on digital, and 6th July on DVD.

Seen “Debt Collectors” yet? While we’re on the subject, what are your thoughts on the first outing, “The Debt Collector”? (You can order via Amazon if you haven’t seen it yet!) What would make the ultimate plot line story for a French & Sue team-up, Part 3?