Home » Articles » Action Fans Get into The Fighting Spirit!

Action Fans Get into The Fighting Spirit!

The Stratford Picturehouse in London played host to a two-day star-studded action-packed extravaganza, The Fighting Spirit Film Festival. Held over a weekend recently in September, Fighting Spirit put on a red carpet event that brought action fans together for a celebration of the best that martial arts action films have to offer, including UK cinema premiers of two quintessentially British thrillers, two martial arts classics, and a bevy of short films from all over the world. The Picturehouse foyer was packed with action film fans, filmmakers, and of course well known stars Scott Adkins, Stu Bennett, Selina Lo, Louis Mandylor, Bryan Larkin, Fleur Keith, and directors Jesse Johnson and Ross Boyask, and we were thrilled to be there to capture it all.

Background
Fighting Spirit was originally founded by Soo Cole, and Paul Alderson of Fighters Inc. magazine and started off as a one-day event celebration of martial arts cinema. Their mission was clear: Through martial arts cinema we aim to entertain and inspire people, promote martial arts culture, and support those who have chosen it as a career.

The first festival was held in July 2016 at the Cineworld Multiplex in Greenwich London, and featured martial arts demonstrations from the famous Shaolin Temple (UK) and the Gatka, Sikh Martial Arts Group. The big screen line-up included “Ip Man 3”, “Drunken Master” and “Kung Fu Panda 3” along with 12 short films. With the event and format proving to be a success, Soo set about planning for the next event.

Celebrity presence came courtesy of author and journalist Mike Fury and MMA fighter Alex Reid presenting the winners with their coveted prizes. The action didn’t stop for the team or the fans with a Fighting Spirit special event earlier this year with the UK cinema premier of “Accident Man” with special appearance from the film’s star Scott Adkins meeting the fans and taking questions in a special Q&A. This successful “satellite” showcase proved to be a veritable appetite whetter for the two-day extravaganza later in the year.

Friday Fun
Even though the festival kicked off in the evening (of Friday 14th September) and was scheduled to start at 7pm, it all started for filmmakers and journalists pretty much on arrival. A couple of hours of schmoozing, catching up with old friends and making new ones ensued, and for me it was the perfect opportunity to speak to some of the amazing talent looking to enjoy and consume some high quality action and compete in the upcoming Fighting Spirit Film Awards.

To serve as appetizers for what the weekend promised to deliver, two short films screened out of competition: Jude Poyer’s fun and wacky “Drug Den Masters” featured some seriously fast-paced Hong Kong-style fight-fu and comedy hitting the target in more ways than one. George and Harry Kirby’s “Cable: Chronicles of Hope” sees Marvel’s anti-hero warrior from the future on a Terminator-esque mission to save the day.

The main event of the evening was the the first of two ‘quintessentially British’ action flicks getting a cinema premier on home soil – Jesse Johnson’s “The Debt Collector” starring Scott Adkins and Louis Mandylor. Considering the film was already available on demand, (as well as Netflix) it played to a packed house with Jesse, Scott, Louise, and Selino Lo (who plays ‘Sandy’) enjoying the atmosphere and a rapturous standing ovation as the credits rolled. As well as meeting and greeting fans, questions were posed in a lighthearted Q&A at the end.

The Chopsticks Trio in conversation with KFK

Kick-Ass Saturday
Fans of the classics got to relive their youth as the continuing story of underdog Daniel LaRusso kicked off on the second day with a special screening of “The Karate Kid Part II”. The film is a very apt inclusion as the series remains an inspirational influence to the team, particularly for festival director/co-founder Soo Cole.

The day included a mix of scheduled martial arts demonstrations including Capoeira from the Grupo Muzenza performers and resident British wushu champions Steve Coleman and Sam Mak. There were also spontaneous demonstrations around the venue whether showing off a particularly impressive side kick, some tricking, spin kicks, or posing in an array of stances for photos, people were keen show their martial stuff.

For those wanting to know more about action filmmaking there was Fighting Spirit’s first seminar and panel discussion – “How to Make a Modern Action Film”. “Life of Action” author Mike Fury hosted the seminar and on the panel were Vengeance writer/director Ross Boyask, Fighting Spirit’s Assistant Director Weng Yu, Sindy Campbell from Film Birmingham, and Eloise Carrow of Singer films. The discussion was aimed at anyone looking to break into action movie-making and as readers who followed our live feed from the day will know it was an insightful look at both the creative and business aspects of filmmaking. 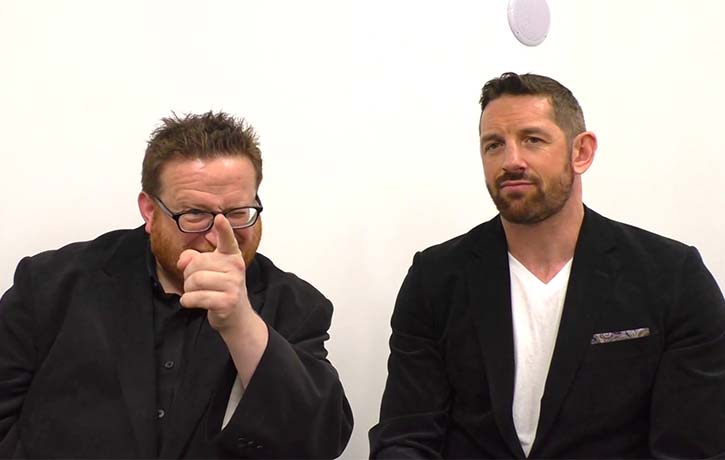 Ross Boyask has a message for you

Louis Mandylor with our roving reporter

Fighting Spirit Short Film Awards
This part segwayed in as seamlessly as someone performing a Kata, into the Fighting Spirit Awards short film competition. By now the day was in full flow and audiences gathered as filmmakers put up their creative dukes to battle it out on the big screen. There was a veritable mix of short fight-fu films in the competition ranging from tongue-in-cheek comedy to dark thrillers, superhero stories, documentaries, and homages to the classic Kung Fu flicks.

Those filmmakers able to do so, travelled from far and wide to be a part of the festival including Jino Kang whose “Kid Fury” series is the talk of the internet, the latest in the saga “Kid Fury: Phantom Witch” competed against such titles as Max Repossi’s “A Chase Sequence”, and Jon Alagoa’s gangster flick “Kiwami” to name a few. The judging panel had the daunting task of assessing six categories (Best film, documentary, fight choreography, actor, actress, and director) with the audience interacting with their say in their own audience choice award.

The master Jino Kang in action

Three films dominated the competition: Godefroy Ryckewaert’s comic spy caper “Tranh and Nowak” won Best Action Choreography and Best Actress for Genevieve Doang, whilst Carter Ferguson scooped the prize of Best Director for his thriller “Dead End” with Bryan Larkin named as Best Actor. Yet the night belonged to Aeddon Sussex, a young filmmaker recently graduated from Middlesex University whose action comedy “Chopsticks” picking up the much sought after Best Film and Audience Choice awards. Aeddon and the cast were there to pick up their award.

With everyone still buzzing from the awards ceremony it was time for the second UK cinema premier. Ross Boyask’s man-on-a-mission flick “Vengeance” also played to a packed theatre, with fans keen to see what Kung Fu Kingdom described as “Get Carter on steroids”. Another standing ovation ensued – the audience having enjoyed the onslaught of John Gold’s bloody vengeance -and remained on their feet clapping until the Q&A with writer/director Ross, along with stars Stu Bennett (WWE’s Wade Barrett), Bryan Larkin and Fleur Keith.

Whilst the networking carried on downstairs others stayed near the screen for the film that really brought martial arts cinema to the west. To mark the 45th anniversary of the death of Bruce Lee, Fighting Spirit premiered Rick Quan’s touching documentary “No Ordinary Joe”.

The evening ended with a special screening of the classic “Enter The Dragon”, a film which for martial arts fans never gets tiresome, but to see the icon himself on the big screen with his charisma flowing (like water) through the theatre was a moving experience, and a fitting tribute to the late great man.

Looking back, the Fighting Spirit team’s dedication to their mission has paid dividends with a spectacular two-day event that brought the best of martial arts action to the big screen. It has seen them grow from a small one-day showcase to a respectable film festival of action cinema. The mix of feature films – both current and classic – as well as the short film lineup meant action fans were spoilt for choice in terms of on screen kick-ass entertainment. For the filmmakers, it was an opportunity to rub shoulders with some of their icons, meet, connect and plan projects together, as well as launch or even further their film careers to new heights.

Very few, if any, film festivals are dedicated solely to action cinema (the exceptions being Spain’s “No Identity Action Film Festival” and US’ “Iron Dragon TV”) so Fighting Spirit, is the new kid on the block that could well lead the way!

Did you attend the Fighting Spirit Film Festival this year? What new, innovative fight films or scenes did you think were most exciting, original and promising? Let us know in the comments below. Like, share and join in the conversation on Facebook and follow us on Twitter & Instagram. (Get into the mood for more FestiveFU with KFK’s exclusives, and subscribe for videos too!)