Tak Sakaguchi, credited here simply as Tak, stars as “Toshiro”, a former, almost mythical, special forces soldier. His skill at stealthy assassination and ability to dodge bullets border on the supernatural, earning him the nickname “Ghost”.

Newt turns out to be a bad ass

20 min fight sequence in the woods is incredible 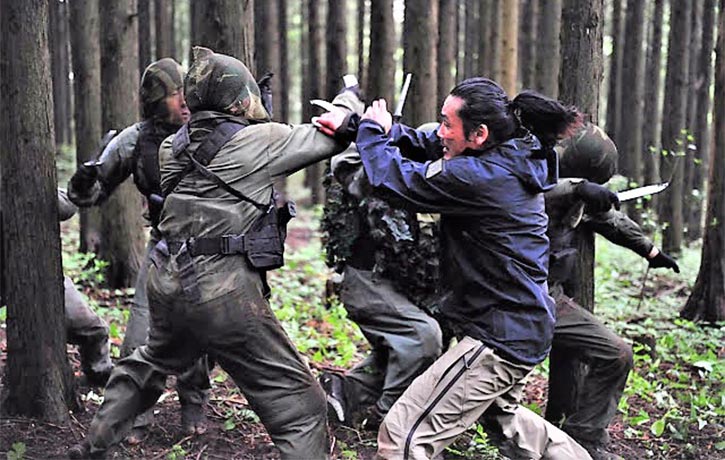 Furious fu action served up in the forest scene

During a tactical exercise in the facility of the National Defence Force, an entire special forces unit is killed by a shadowy killer known as “Ghost”.

Toshiro, a small store clerk lives a quiet life with a young girl, Sachi. Although his life is seemingly calm and peaceful, he struggles desperately to control his “inner beast”. During his therapy sessions with a pretty psychiatrist, he discusses dreams and visions of his “imagined” killing rampages.

The mysterious Phantom dispatches a team of assassins who have unfinished business with Toshiro. It is revealed that in the past Toshiro was the legendary black ops super-soldier “Ghost”, an unseen killer with almost supernatural fighting abilities. In his bid for survival, Toshiro’s “inner beast” unleashes.

When Sachi is kidnapped, Toshiro journeys to a secret special forces base to confront the demons of his past.

You can clearly see and appreciate each deadly technique

Much of the action in this film is not for the faint hearted. “Re:Born” ratchets it up to a level of gore not seen since The Raid films.

An atmospheric and tense opening sees a stealthy assassin infiltrate a special forces unit exercise. The tension is so palpable that this could be a J-horror version of Ridley Scott’s original “Alien” movie.

Fast forward and shopkeeper Toshiro is living a peaceful life. However, a mild-mannered-looking assassin shatters that peace. A briefcase hides a silenced pistol as he takes pot shots at Toshiro through a throng of pedestrians. Toshiro literally dodges the bullets to take his would-be killer out in an innovative but brutal fashion.

Sachi is in Toshiros care

Tak plays the role of Toshiro with a cold efficiency

The Zero Range Combat System is based on field tested techniques

Actress Mariko Shinoda as the apparently cute and unassuming “Newt”, turns out to be a bad-ass herself, as she dispatches two lecherous males in an elevator with just a couple of economical moves. As Toshiro makes his way down a narrow street, every pedestrian on it is a potential assassin, John Wick 2-style. The bone-crunching choreography is swift and efficient. It is continually inventive, ably demonstrated by scenes like this one and a fight in the confines of a phone booth.

There is a long and quite brilliant sequence in a wood in which Toshiro and his two companions take on an entire platoon of camouflaged soldiers. They use stealth, guns, blades, martial arts and even a folding shovel! Toshiro fights in an unconventional style that looks part animal, part drunken that only adds to his Ghost-like legend. With barely a pause for breath, Toshiro enters the enemy’s lair in a further, even more tense sequence for the film’s masterful finale.

I am not entirely sure what the moral of the plot was and it does take a little while before the action really kicks off, but my word…is your patience rewarded! The sequence in the woods is tense and thrilling. Lasting 20 minutes from start to finish it’s worth the asking price of the film alone. Even though the fighting features mostly fast-moving, close-quarters skills, and is presented with some quick-cut editing, you can still clearly see and appreciate each deadly technique.

As we have come to expect from Eureka Entertainment, the film is presented with a crisp high definition picture and superb quality DTS soundtrack that accentuates every thudding gunshot, cracking bone and slash of blade. Sadly though, the music score is one of the dullest to ever accompany an action film.

Tak plays the role of Toshiro with a cold efficiency befitting his black ops alter-ego. In the action department he performs crisp and precise techniques in every single fight scene. He is John Wick, Rambo and The Man From Nowhere, all rolled into one lethal package. “Re:Born” features some of the bloodiest, most brutal and exciting fighting action I have seen in a long time. It’s really going to take something special to beat this one in 2018!

The legend of Ghost borders on the supernatural

Toshiro is haunted by his visions

Toshiro takes his would be killer out in an innovative fashion

“Re:Born” releases on Blu-ray & DVD in the UK on 12th March 2018 courtesy of Eureka Entertainment. What are your thoughts on this title, which Japanese martial arts flicks and action heroes really impress you? Let us know below, join in the conversation on Facebook and follow us on Twitter. (Check out our other fu-centric reviews too!)