For British action star Scott Adkins, Saturday 7th April 2018 was a special day as not only was his dream project Accident Man getting a big screen outing but it was also the film’s UK premier in his hometown. The Mockingbird Cinema in Birmingham’s famous Custard Factory Creative Quarter hosted the sold-out event organised by the Fighting Spirit Film Festival to mark the release of this epic British action-thriller.

Scott was there of course and as well as talking to us he took the time to meet and greet his fans, stopping to take pictures. Along with Scott the guest list featured a roster of talented award-winning filmmakers whose work is sparking growing attention in action-movie circles.

Last seen on the big screen trying to kill each other was director and star of “Express Delivery” Beau Fowler with co-star Sonny Louis seeming a lot friendlier this time, along with “Kowloon Killers” director Leif Johnson (look out for our interview coming soon). Other guests included producer Eloise Carrow hot off the successful premier of action thriller “Amber”, at last year’s Raindance Film Festival, and Phillip Ray Tommy, writer and director of “Cain & Abel”. 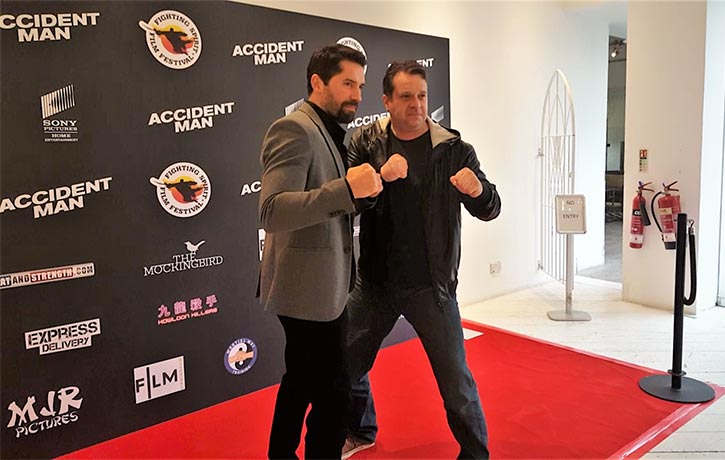 Guests were certainly wowed and entertained but feet were getting itchy for the main event and it wasn’t long before we filed into the screening room for the main event. “Accident Man” received a rapturous applause and cheers from the audience who had long awaited this moment since it was first announced. For Scott it marked a truly moving moment sitting in the front row, enjoying the film with an audience, and turning round to see our reaction. The night finished with a thirty-minute Q&A hosted by Fighting Spirit Festival organisers Soo Cole and Weng Yu. It was a fantastic talent-fest that was as momentous an event for Scott Adkins as it was for his fans and organisers – for both a dream come true.

Keen audience at the QA

“Accident Man” releases on VOD and DVD in the UK from April 16th. What are your impressions of this title so far (if you’re in the US, of course you may have already seen it) and what are your other Scott Adkins fave flicks ‘n’ fights? Let us know in the comments below, join in the conversation on Facebook and follow us on Twitter. Stay tuned for our new interview with Scott coming soon!  (And btw, it’s no Accident, Man – you can get more of your action-fu hits in one place!)