Anthologies are always loads of fun, but rarely do we see them deviate from the usual territory in the horror genre and branch out into action. Fortunately, that’s something that “Blood, Sweat and Terrors” aims to change. Made up of a collection of short action films, “Blood, Sweat and Terrors” is equally adept at keeping horror fans engaged. With stunt people in the driver’s seat throughout, the film is a mix of shorts that blend stunt-filled action with horror and suspense ripped right out of “The Walking Dead”.  Indeed, you’d be forgiven for mistaking at least one short for a segment intended for that very show!

The first two segments, “Empire of Dirt” and “Awesome Runaway”, set the tone appropriately with each delving into a man-on-the-run story while serving a healthy dose of gritty martial arts action. If you’ve seen any of the “VHS” movies, particularly “VHS 2”, you might even come away thinking they were unused segments from that series repurposed for this film.

“Jacob’s Wrath” carries the core concept of the first two segments over with its focus on a prisoner escaping his captors, with a more trippy, almost post-apocalyptic vibe to it.

The heroines of Flow pin down their enemies!

“Flow” is comparatively akin to a black comedy, with two female soldiers fending off attacks from male attackers while engaging in profanity-laced banter. A word of advice to more puritanical viewers – the sense of humour exhibited by “Flow” probably isn’t going to be your cup of tea!

“Express Delivery” is where the film really, and literally, kicks its action into high gear, with its premise of an unkempt man fighting off his kidnapper’s attempts to deliver him to a cadre of sinister pursuers. Aside from Beau Fowler (who also wrote and directed) and Sonny Louis delivering a superb fighting sequence, it’s not often you meet a man who, for all intents and purposes, appears to be homeless, kicking this much butt!

That’s one way to dodge a roundhouse kick! 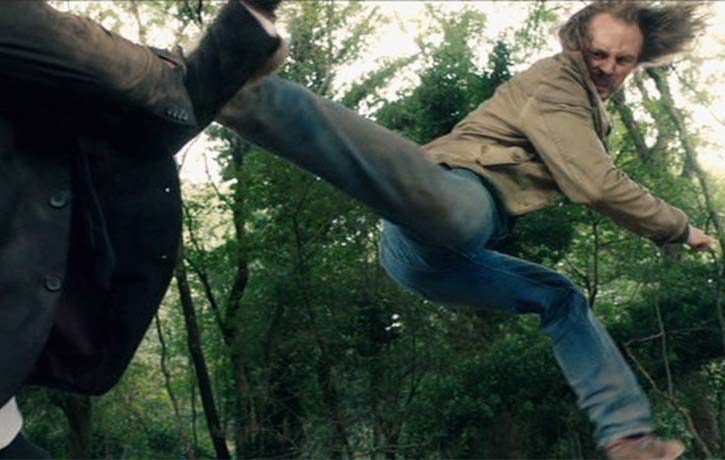 A flawless jump spinning back kick in Express Delivery!

The following segment, “Turncoat”, is more of a morality play on a burglar forced to confront the ethics of his profession amid the protests of his very angry and increasingly desperate colleagues.

“Get Some” brings the focus back to the horror side of things, and is easily the best of the bunch to do so. Set sometime after a zombie outbreak, “Get Some” focuses on a reality show crew taking viewers through the ins and outs of zombie hunting. Aside from its unique premise for the zombie genre (one that arguably deserves to be broadened into a feature), fans of “The Mummy” trilogy will no doubt immensely delight at the appearance of John Hannah as a conflicted scientist and zombie expert.

A kidnapper confronts a moral dilemma in Turncoat

Olga taking her enemy down!

The fight rages on in Fetch

Get your weekly zombie hunting fix via Get Some!

The last two segments hit hard and take the film out on a bang. In the first, “Olga”, our titular heroines thrill the audience with a barrage of Muay Thai and Jiu-Jitsu manoeuvrers while settling a dark vendetta with a group of Russian gangsters.

The final segment, “Fetch”, is hands down the one which will bring out the cheering fan in every stunt loyalist. Originally filmed in 2007, and directed by Daniel Bernhardt, “Fetch” is a rare moment of a true on-camera show-stealing spotlight for 87Eleven’s David Leitch, known today for his directorial work on “John Wick”, “Atomic Blonde”, and “Deadpool 2”. Coming at the tail end of the film and hitting viewers with a fantastic final smackdown in an auto repair garage, martial arts fans couldn’t have asked for a better closing segment to this collection than “Fetch”.

Coming in for an aerial strike!

Ready to take down some zombies!

Our hero arms himself in Empire of Dirt

Olga has her opponent locked down!

Want to zombie hunt, tune in to Get Some!

With a wild, visceral blend of action and horror, fans of both genres will definitely want to give “Blood, Sweat and Terrors” a look. Whilst without the wrap-around to tie the separate segments together traditionally associated with anthologies, the film is nonetheless packed to the gills with spectacular martial arts action and cold-blooded horror – with even a little black comedy thrown in for good measure. Indeed, in this day and age where stunt people toss up action shorts left and right on YouTube, more action anthologies like “Blood, Sweat and Terrors” might well be in order!

Seen “Blood, Sweat and Terrors” already; what did you think of the film’s mix of action and horror? What’s your favourite indie fight scene ever, want to see more action anthologies directed by the pros of the stunt world? Let us know in the comments below, join in the conversation and share this on Facebook, follow us on Twitter & Instagram. (Time to FUflix and chill with KFK’s exclusives and why not subscribe for videos too!)

Action Fans Get into The Fighting Spirit!