Already in his fifties at the time of filming, Oscar-nominated actor Liam Neeson reinvented his career as an A-list action hero with the role of “Bryan Mills”. Although he had some action experience from his work in “Darkman”, “Star Wars: The Phantom Menace” and “Rob Roy”, the success of “Taken” led to two box-office hit sequels, and further action movies featuring Neeson as tough, determined, no-nonsense heroes in movies such as “Non-Stop”, “Run All Night”, “A Walk Among the Tombstones”, “The Commuter” and “Cold Pursuit”.

I will find you and I will kill you

Mills is a man of preparation and precision

Xander Berkeley plays Lenore’s wealthy new husband and Kim’s stepfather “Stuart St. John”. He will be familiar to martial arts movie fans from his role as Nathan Van Cleef in Jackie Chan‘s action comedy “Shanghai Noon“. Making a guest appearance as fictional pop star “Sheerah” is Australian actress Holly Valance. She would go on to appear in a martial arts action role herself in the movie adaptation of the popular video game “DOA: Dead or Alive“.

A retired CIA agent, Bryan Mills is trying to rebuild the relationship with his 17 year-old daughter Kim, having neglected it due to the nature of his work. To make the situation more awkward, Kim lives with his ex-wife Lenore and a wealthy stepfather, Stuart.

Having gained Bryan’s reluctant permission, Kim travels to Paris with her best friend Amanda. When they arrive in France however, they are targeted by an Albanian sex trafficking ring. Bryan hears them being taken over the phone and promises the kidnappers that if they do not let his daughter go he will find them, and he will kill them. 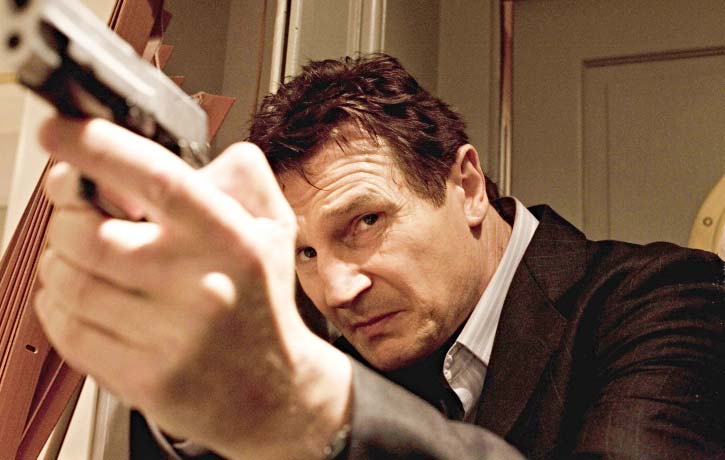 Bryan has 96 hours to find his daughter

I told you I would find you

Mills absolutely will not stop until his daughter is safe

Heading to Paris with the slimmest of clues, Mills must call on his particular set of skills that have been acquired over a number of years as a black ops agent. With an estimated 96 hours before Kim disappears forever, it’s a race against the clock between a vicious gang, corrupt officials and a deadly-determined father.

From the opening minutes it is quickly established that not only is Bryan Mills’ daughter everything to him, but he is a man of preparation and precision. Even the way he wraps a gift or fills a photo album is done with absolute exactness and attention to the smallest detail. We also learn from his friends’ reminiscences that he has had a clandestine career serving the U.S. government.

Our first glimpse of his “particular set” of fighting skills comes when Mills protects a pop singer from a knife wielding maniac. As you would expect, Mills responds swiftly and efficiently. All the establishing scenes mean that when we get to the famous “I will find you, and I will kill you” phone call, you believe absolutely that Mills is a man of his word.

Mills use of electricity underlines his ruthless streak

The action ante is soon upped when our hero locates his first suspect in Paris. Neeson looks totally convincing performing the highly economical fighting skills himself. This isn’t the flashy, extravagant choreography of many a martial arts flick, but a showcase for the no-nonsense incapacitating of an opponent using the most direct techniques possible. There are no spinning kicks here when a sharp ridge hand to the throat will do the job.

Faced with multiple foes, Mills has to combine intelligent strategy with his direct approach, utilising his environment to take them all down. He is equally precise and efficient when dealing with bladed weapons or firearms. An interrogation scene in which Mills discusses the efficiency of the electricity further underlines his ruthless streak.

As the film builds to its conclusion, like a human Terminator, Mills absolutely will not stop until his daughter is safe. With Kerambits, guns and even fire extinguishers thrown into the mix, “Taken” delivers some of the best movie fighting seen in a European- produced movie.

Coming from the film makers that brought us European-based action films such as “Kiss of the Dragon“, “The Transporter” and “District 13“, “Taken” was a surprising breath of fresh air when it arrived in 2008. The fighting action was brought back down-to-earth with an economy of movement that would make even John Wick nod in admiration. With a running time of 90 minutes, the movie itself is as efficient as the action sequences that populate its simple premise and plot.

Even though Liam Neeson was in his mid-fifties when this film turned him into an unlikely action star, he looks like he knows exactly what he is doing, whether it be in hand-to-hand combat, using a knife, or firing a gun. The “Making of” feature on the DVD illustrates just how much of the action Neeson impressively performed himself, including the fighting, shooting, and diving through windows and over furniture!

It allows him to convincingly portray Bryan Mills as a master craftsman in wiping out bad guys. He also plays the role of a father obsessed with the smallest details and his child’s well-being, with conviction. This added emotional core to the plot elevates “Taken” above other Euro-action thrillers, establishing it as a modern action classic that launched a hugely profitable franchise.

A film with great “re-watch” value, “Taken” is one to stick on when you’re looking for a robust and entertaining action fix!

How does “Taken” look to you now…some 12 years later…? Are you fan of Luc Besson’s action thrillers such as “Nikita”, “Leon”, “Unleashed” or “The Transporter” and “Taken” movies? What do you think of more recent efforts such as “Lucy” or “Anna“? Let us know your favourite fight and action scenes from the Euro-thrillers in the comments below; Like, share and join in the conversation on Facebook and follow us on Twitter & Instagram.

TAKE yourself into a FUniverse of more detailed reviews, Top 10’s, exclusive interviews, TAKE your own exclusive KFK gear, and subscribe for more global action on YouTube!