There’s no point in beating around the bush – “Unleashed” (released as “Danny the Dog” in some territories) is Jet Li’s best English-language film. Something of a modernization of Charles Dickens’ “Oliver Twist”, it’s like no other Jet Li film you’ve ever seen before. Under the action direction of Yuen Woo-ping, “Unleashed” sees Li take on the daunting task of portraying a man with the mind of a child, conditioned his entire life to turn into a savage killing machine on command, until an unlikely separation from his cruel master leads him to experience gentleness and love for the first time.

In the lead role of Danny the Dog is Jet Li, giving one of the most memorable performances of his career in the realms of both acting and action. Violence is the only life Danny has ever known, and it’s reflected in the stunningly vicious fighting style he employs whenever he’s commanded to take down the enemies of his monstrous “Uncle” Bart, played by the late Bob Hoskins. Few can pull off a bloodthirsty Cockney gangster like Hoskins could, and his performance as Bart is one of his best, and most despicable. Morgan Freeman plays at the opposite extreme in the role of Sam, a blind piano tuner who along with his step-daughter Victoria, played by Kerry Condon, becomes the first source of kindness in Danny’s life, one that puts both of them at odds for the plans Bart has in mind for Danny.

Bart, the most ruthless loan shark in Glasgow, never has to worry about missing a payment. All he has to do to deal with unscrupulous defaulters is remove the collar around the neck of his human Rottweiler named Danny, a highly skilled martial artist whom Bart has psychologically conditioned since childhood to turn into a murderous beast who rips apart his enemies with the ferocity of a rabid dog. Bart thinks he’s hit the jackpot when he enters Danny into an illegal fight club, with Danny effortlessly slaughtering his first opponent, but a gang of Bart’s vengeful enemies retaliate for a previous confrontation with Bart.

Danny ultimately survives, and assuming Bart dead, wanders the streets until he is taken in by blind American piano tuner Sam and his step-daughter Victoria. For the first time in his life, Danny experiences love and warmth from Sam and Victoria, who eventually come to think of him as family, and invite him to return to New York with them when Victoria’s musical studies in Glasgow end. However, Danny’s idyllic existence is interrupted when he is pulled back into the clutches of the very much alive Bart, who, much to his chagrin, discovers that someone has finally managed to domesticate Danny the Dog.

The Stranger has Danny cornered

The master commands and the dog obeys

Silvio Simac vs Danny the Dog 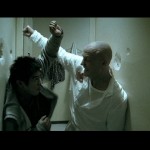 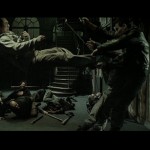 The balance of action and drama seen in “Unleashed” is absolutely flawless. The latter makes up the bulk of the film’s middle section, and it’s these quieter moments of Danny being gradually tamed from the life of violence he had always known, that make the action scenes so much more impactful when they arrive. The concept of a normal life is completely alien to Danny, with everything from a trip on a row boat to the simple act of eating ice cream presenting a genuine challenge for him. This is easily some of the best acting Jet Li has ever pulled off, and oddly enough, the fact that Danny, like Li himself, is an outsider to Glasgow makes his transition to a normal, peaceful life seem that much more pronounced.

But, rest assured, “Unleashed” does not disappoint as a martial arts film. The opening fight of the film is better than anything in Li’s previous Hollywood outing, “Cradle 2 the Grave”, and worth the admission price all by itself. Once Bart removes the collar on his neck, Danny goes from a docile bystander to an out of control cyclone of fists and feet, with the room he’s standing in resembling the Battle of Gettysburg by the time the collar goes back on. Rarely, if ever, has Li been allowed to go this insane in a movie before, and his unbelievable speed is almost more astonishing here than in his early days!

The film is also able to truly illustrate Danny’s transformation from the animal he once was by placing his two matches in the underground fight club before his escape from Bart’s control and after his return. The first is a blink-and-you’ll-miss-it confrontation that’s less a fight than an outright murder that’s shocking even after seeing what Danny is capable of in the opening scene. The second is of one of the film’s highlights, where the now placid Danny is literally shoved into a drained swimming pool by Bart to take on four opponents armed with medieval weapons. The leader of the pack is portrayed by British Taekwondo champ Silvio Simac, who is what you get when you put the kicking skills of Jean-Claude Van Damme into the body of Arnold Schwarzenegger. 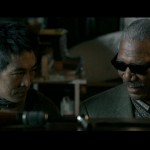 Danny never met anyone as nice as Sam 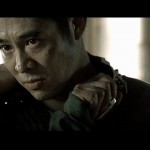 Danny is ready to reclaim his freedom 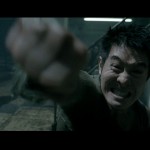 “Unleashed” was where Silvio first appeared on the radar of martial arts fans, and it’s easy to see why; anyone who is sure that larger fighters can never be as swift as their smaller opponents has most definitely not seen him in action. But if you think that Li, Yuen Woo-ping, and director Louis Letterier couldn’t possibly top that, you need only wait for the finale. Danny fights to protect Sam and Victoria and escape Bart’s latest attempt to recapture him, only to find himself battling a swarm of hired thugs, including a bald, machete-wielding kicking machine known only as The Stranger, played by Michael Ian Lambert. Li had previously battled him in “Black Mask”, where he and Danny face off within the tight confines of a narrow bathroom stall, and it is brutal with a capital “B”! “The Raid 2” is one of the only other known examples of a bathroom stall being utilized in a fight scene, and given what an all-out war it is in “Unleashed”, one has to wonder if it didn’t provide a little inspiration to Gareth Evans.

“Unleashed” is a movie that achieves just about everything it sets out to do. As a drama, it’s a well-written, poignant and surprisingly moving character study of one man’s struggle to escape his life as a killing machine. As a martial arts flick, it is captivating and thrilling from the moment it gets going, thanks to Woo-ping’s fantastic action direction, the phenomenal martial arts abilities of Li and his supporting cast, not to mention some of the most realistic sound effects of blows landing you will ever hear. And a word to the wise – pay particularly close attention to the pool fight scene; you just might see a then-unknown Scott Adkins during his pre-Boyka days!

Bart prepares to unleash his dog 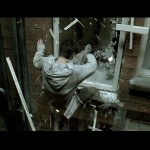 A smashing time Danny didnt see that one coming

A masterful sidekick from The Stranger

Looking back on Bolo Yeung