“Kingdom”, nice (ahem)…title for a film for starters! And historical epics concerning China’s Warring States Period (between 475 and 221 B.C.) are a dime a dozen among fans of Asian cinema, but the manga-origins of Shinsuke Sato’s “Kingdom” help set it apart from the rest of the pack. With a sweeping, engrossing sense of scope and scale, and no shortage of sword-slashing action, “Kingdom” is an engaging, exhilarating period adventure – one that, if you can get past the fact that it’s a movie about the Warring States Period told entirely in Japanese, feels like a real journey into the past, in the best way possible.

Kento Yamazaki takes the lead as a young slave and aspiring warlord, Li Xin, while Ryo Yoshizawa tackles the role of his close friend Piao, along with portraying the beleaguered Emperor Ying Zheng. Kanna Hashimoto also appears as He Liao Diao, a young drifter who becomes a close ally of our hero, while Masami Nagasawa portrays tribal leader Yang Duan He, and Kanata Hongō assumes the role of the nefarious Cheng Jiao.

The Kingdom of Qin, 255 B.C., at the height of China’s Warring States period, two children born into slavery, Xin and Piao, bond over their shared admiration for the warlords that rule their land. As Xin and Piao train side-by-side in their youth, the two vow to become the greatest warlords the world has ever known, one day. When Xin and Piao reach adulthood, their growing skills with the sword attract the attention of Emperor Ying Zheng, who recruits the latter into his service.

However, Xin is stunned to find a mortally wounded Piao return one night, to inform him of an ongoing coup that has left the kingdom’s monarchy in disarray. Xin swiftly sets off to avenge his friend’s death, only to encounter the exiled Emperor himself on his travels, and discover the shocking truth of just why Piao was recruited in the first place.

Xin is determined to avenge his fallen friend

Yang Duan He is among the mightiest warriors in the land

Adapting a manga or an anime to live-action is a tough nut to crack.

The medium’s distinctive visual flair, larger-than-life characters, and decidedly otherworldly qualities are the meat and potatoes of what its fans (or “Otaku”, as they like to be called) are in it for. Perhaps that’s what makes “Kingdom” such a fascinating specimen, in this regard.

While it boasts all the hallmarks of a historical epic – a massive sense of grandeur, large-scale action, sets and costumes that look like the director took a time machine to the specific period – it doesn’t bear as many immediate signs of its beginnings in manga form.

That’s not to say “Kingdom” makes an effort to mask its own source material, and to be sure, the sheer amount of bloodshed coupled with the aforementioned Japanese dialogue in a Chinese historical epic aren’t exactly subtle giveaways of its origins. 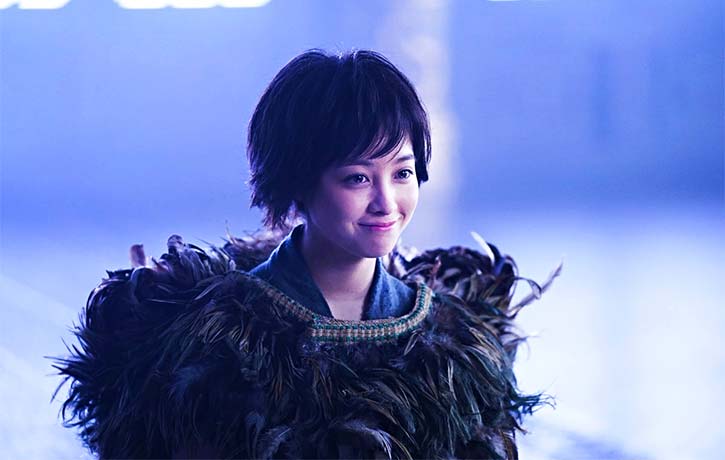 He Liao Diao has some rather unique disguises

Xin prepares to unleash his skill with a sword

Yin Zheng prepares to take back his Kingdom

However, there’s no mistaking what the fetal stage was for the whacked-out blast of primary colors that is “Gintama” or the undisputed champion of manga-to-big-screen adaptations that is “Alita: Battle Angel”. By contrast, “Kingdom” places its focus more heavily on the historical side of its narrative (albeit a massively fictionalized one, if that actually needed to be pointed out), and in so doing, manages to have its cake and eat it too.

For fans of the source material, the characters and world they love are brought to life before their eyes and unquestionably given their due. For newbies, “Kingdom” is a sprawling adventure of vengeance and unlikely heroism during one of the most important chapters in Asian history.

Both camps will certainly have plenty of happy campers when it comes to the action of “Kingdom”. The film’s sword-driven action is fast, flashy, and uncompromising in its hard-hitting, metal-on-metal clashing power. While far less over-the-top than the volcanic eruptions of blood in “Kill Bill”, the action sequences of “Kingdom” are true duels to the death.

In the role of our protagonist Xin, Kento Yamazaki really brings the thunder, with his savage war cries alone showing just how much he means business in his vendetta. Xin’s origins as a slave also give his battles an added potency, with the once-aspiring warlord now effectively throwing himself into the deep-end for a fight he’s clearly not ready for, but one that his loyalty to his friend and desire to save the kingdom won’t let him walk away from either.

Xin brings the might of a warlord to the battle

With “Kingdom” being a historical adventure, it’s consistently on the move, with a rapid-fire series of action scenes coming in such succession that pinning down its standout set piece is tricky. However, “Kingdom” is a true master of how to build upon its own momentum, and there’s no better proof than in its literal “storming of the castle” finale.

What’s even better is that director Shinsuke Sato, knows how to invest his audience in both the macro and micro scales simultaneously. Viewers are already on the edge of their seats as the literally hundreds of heroes and villains slash swords outside of the palace for the fate of the kingdom. Xin and his allies race to the big boss at the top with our emotional investment sealed upon a handful of young peasants giving everything they’ve got for both vengeance and peace.

The manga-to-film transition is a hard one to pull off, and “Kingdom” does so with an emphasis on being an historical epic, opening a neat niche and groove for diehards and newbies alike.

The grand scope of the film is never less than engrossing, and it never tarries on getting from one dizzying sword battle to the next. Lovers of the source material will see their beloved property done justice, lovers of history will enjoy the film’s epic scale, and lovers of action will have plenty to feast upon. It’s hard to please such diverse segments of the audience all at once, but “Kingdom” takes a vigorous stab at it and succeeds admirably!

Yang Duan He leads her army into battle

Xin and Piao vow to become mighty warlords one day

Want to wake up your noble, inner and outer Warrior best self? Then march on over to the KINGDOM of FU, check out these Top 10 Sword Fights, exclusive interviews, seize your Official KFK gear AND subscribe for more martial mania on YouTube!