In a summer movie season filled with assassins, superheroes, kaiju, genies, and toys coming to life, one reluctant anti-heroine plays a chess game for her very freedom in “Anna”. While more of a spy thriller with action elements than the female “John Wick” it’s been pegged as, “Anna” nevertheless hits hard where it counts with Sasha Luss putting in a committed performance as a first-time leading lady. With its cast of despicable supporting characters, it brings the titular heroine into sharp focus and there’s a home run action set piece that’s easily one of this summer’s best!

A day in the life of Anna Poliatova, played by Sasha Luss, is one comprised of crime, drugs, and domestic violence. With a life outside of the Moscow ghetto that she calls home seemingly an impossibility, Anna comes just one step away from ending her own life, until she is recruited by KGB officer Alex, played by Luke Evans, who makes Anna a deal she can’t refuse – one year of training, followed by five years as a KGB assassin, after which she will be set for life.

Anna accepts the offer and completes her training, only to hit a roadblock in the form of KGB head Vassiliev, played by Helen Mirren, who makes clear to Anna that retirement from the KGB will only come at the barrel of a gun. However, Anna soon gets another shot at freedom when CIA agent Leonard Miller, played by Cillian Murphy, eager to make his mark on winning the Cold War, offers Anna her freedom in exchange for assassinating Vassiliev.

It should be emphasized that “Anna” isn’t wall-to-wall action, but more of a “Bourne”-esque spy caper with a handful of action beats, albeit extremely good ones.

At its core, “Anna” is about its central character effectively being at the mercy of her circumstances, and her quixotic ambition to break free. At virtually every turn, Anna is, in some form or fashion, held hostage by a more disgusting villain than the last, and by mid-point of the film, her impoverished life of drugs and self-mutilation looks just a little less soul-crushing.

Anna begins plotting her vendetta against her enemies

Getting straight to the point 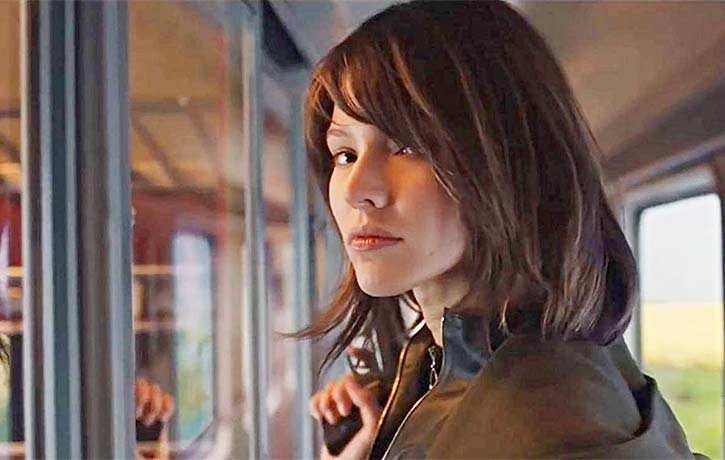 Anna learns to become a master of disguise

Helen Mirren is a true she-devil as Vassiliev, putting our heroine through a shocking level of emotional abuse, just seems like the world’s most sadistic drill sergeant felt like bullying their weakest recruit years after boot camp. Cillian Murphy’s portrayal of Miller, meanwhile, is a villain almost tailor-made for the post-Harvey Weinstein world, wasting no time whatsoever in pursuing carnal activities with Anna after recruiting her to serve as a double agent. Anna nevertheless learns a lot from both, and the third act proves to be an immensely satisfying case of the student becoming the teacher.

When it comes to the action, “Anna” definitely places an emphasis on quality over quantity. While there are a handful of chases, fights, and gun battles throughout the film, the real centerpiece, and the point where the audience gets its money’s worth, is Anna’s first test run as an assassin.

Tasked by Vassiliev with carrying out a hit in under five minutes in a crowded restaurant, all hell breaks loose as soon as our first-time hit girl pulls out her side arm, giving way to a smackdown that gives new meaning to the term “food-fight” as our heroine bashes heads in with dinner plates and other assorted utensils.

Whatever snippets you may have seen in the trailers, do not truly prepare you for the sheer number of butts Anna kicks and just what an astonishing set piece the restaurant brawl really is.

Anna pulls the trigger on her first hit

Annas training has taught her many ways to use a gun

Not only is it among the most immaculate, beautifully finessed action sequences of the year, it’s arguably on par with the stairwell battle in 2017’s “Atomic Blonde” and the best that the “John Wick” franchise has given us. Where it might be frustrating for another action film to place all its chips on one major set piece, the restaurant smack-fest in “Anna” is so well done as to render those kinds of complaints moot.

While “Anna” keeps itself in check as an assassin thriller with the occasional action beat, Sasha Luss goes all in for her first lead and utterly commits herself to the rigors of a young woman quite literally battling for her freedom. There’s also probably no set of villains this summer that you’ll love to hate more than Helen Mirren and Cillian Murphy’s portrayals of Vassiliev and Miller, and to see our heroine gradually learn to outmaneuver them will have you rooting for her victory nearly as much as for her knock-out, drag-out restaurant fight.

Yes, there are bits of action sprinkled throughout the rest of the film, but it could very well be for the delivery of that major slam action dunk alone that you’ll be recommending “Anna” to fellow moviegoers!

Anna is beginning to learn how to manipulate her enemies

Seen “Anna”? What are your thoughts on Sasha Luss’ performance and the film’s indelible restaurant smash-fest? Let us know in the comments below; Like, share and join in the conversation on Facebook and follow us on Twitter & Instagram. Looks like warrior women are fighting back with a vengeance – here are more Femmes-of-FU in “Furie”, “BuyBust”, “The Villainess” and Maria! Also check out these in-depth interviews, Top 10’s, get your cool, exclusive KFK merchandise and don’t forget to subscribe on YouTube for more videos!