OUT NOW, 88 Films bring us another stunning Blu-ray presentation of an old-school classic! Coming from a new 2K Remaster of the Hong Kong Cut from the original 35mm negatives, is Jackie Chan’s 1976 kung-fu thriller, “SHAOLIN WOODEN MEN”, order your copy on knockout Blu-ray, from 88 Films and Amazon!

In an early leading role Jackie Chan stars as “Little Mute/ Brother Mute”, a kung fu student at the legendary Shaolin Temple. Before his breakout kung-fu comedy hits “Snake in the Eagle’s Shadow” and “Drunken Master” in 1978, a 22 year-old Jackie Chan was still being pigeon-holed in more serious roles at director Lo Wei’s production company.

In 1976, Hong Kong filmmakers were still desperately trying to fill the void left by the death of superstar Bruce Lee. Although still not given creative control over the action, this film features early examples of action more suited to Jackie’s considerable physical talents.

Taiwanese actor Chin Kang, sometimes credited as Kam Kong, plays “The Prisoner/ Foolish”. In a lengthy career he has appeared in films such as “Master of the Flying Guillotine”, “Half a Loaf of Kung Fu”, “The Iron Monkey” and “Snake and Crane Arts of Shaolin”.

Jackie gets to show plenty of his phenomenal physical talents

The veteran Taiwanese actress, Chang Ping-Yu stars as “The Nun”. In a career that spanned from the 1950’s to the 1980’s, she appeared in dozens of movies, often playing motherly characters. She is probably most recognisable to Western fans as Shen-Chai’s mother in the King Hu masterpiece “A Touch of a Zen”.

Familiar to fans from his roles in films such as “Magnificent Butcher” and “The Young Master”, a youthful Chiang Kam plays a “Restaurant Waiter” who befriends Little Mute. Doris Lung Chun-Erh plays a “Waitress”, who lets fly with her high kicks when some thugs try to take advantage of her! Look out for an appearance from Jackie’s long time friend and “opera brother”, Yuen Biao.

Little Mute is a new Shaolin student who struggles to keep up with the other students and to complete the gruelling tasks assigned to him by his instructor.

Haunted by the memory of his father’s murder at the hands of a deadly masked kung fu assassin, he takes a vow of silence. Little Mute hopes to learn the Shaolin kung fu techniques that will enable him to one day avenge the death of his father. 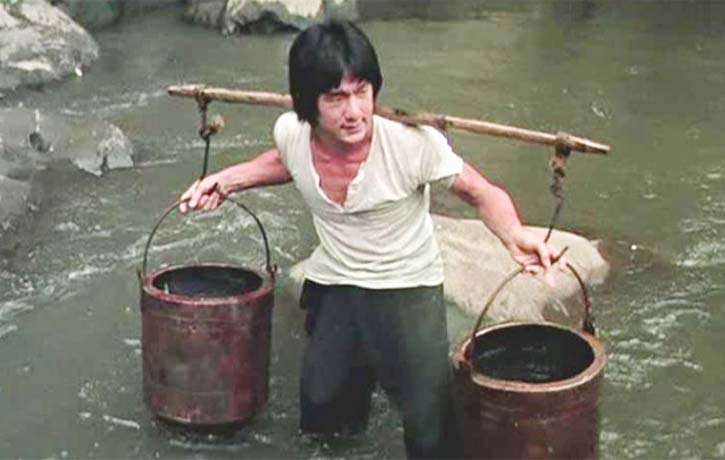 One day, Little Mute follows a drunken monk to a secret cave behind a waterfall. A man is imprisoned there. Over time, Little Mute befriends the violent prisoner by bringing him food and wine that he steals from the monastery.

He learns that the prisoner is a deadly martial artist who is developing a technique called the Lion’s Roar. Little Mute convinces the prisoner to train him. The prisoner’s style aims to kill the opponent as fast as possible.

A Shaolin nun sees Little Mute practicing these killing techniques, but educates him that martial arts are not for killing, rather they are for self-development, with self-defence employed only when necessary. She trains him in the Gliding Snake style, the ideals of which clash with those of the prisoner’s killing style. Nevertheless, Little Mute continues to study both styles.

In order to graduate from the Shaolin Temple, Little Mute must pass the test of the Shaolin Wooden Men Alley, containing thirty-six mechanical wooden dummies that attack anyone who enters the hallway. If he can pass this test, an even greater task awaits him; defeat the deadly Green Dragon Gang. However, the final confrontation reveals a terrible truth to Little Mute about his mentor’s past.

Jackie Starts out with some Slick Acrobatics & Kung Fu

The film opens straight into the action in an atmospheric, candlelit studio, where Jackie Chan takes on five monks fighting in the styles of the dragon, snake, tiger, leopard and crane. The choreography is slick and fluid with Jackie throwing in some impressive acrobatics amongst the traditional kung fu moves.

Atmospheric footage of life in the Shaolin Temple, with monks sweeping, farming and cooking, sets the scene for the first half of the film. In an oft-copied scene, Jackie is working hard, struggling to carry heavy buckets of water up steep stone steps.

The Beginnings of Drunken Master…

Foreshadowing the movie that would cement him as a star two years later, Jackie runs into a drunken monk, and copies his drunken movements.

Slapstick Clues to a Future Star

During many of the scenes with the drunken monk, there are hints of the slapstick elements that would later lead to Jackie breaking out as a star in his own right.

A Nun tries to teach the true meaning of kung fu

The obligatory training sequences present the young Jackie Chan in fine physical form. He looks phenomenal whether he’s performing strong kung fu forms or showing off his unassisted handstand push ups. A big pay off is Little Mute negotiating the Wooden Men Alley. Jackie’s agility is supreme and you can start to see that although he wasn’t the “next Bruce Lee”, he was instead a truly special talent in his own right.

Soon after Mute leaves the Temple, he gets into a fight with some thugs, one of whom is played by Jackie’s opera brother, Yuen Biao! Once more, the choreography is just that little bit more sophisticated than many similar films of the period, and another marker that Jackie’s time to shine would be soon.

Listen to your masters

The Prisoner has a dark past

Observe Chan’s Fights are Truly on Another Level…

Even though this film was made well before Jackie could fully express his physical skills, it is evident from the fights in this film where he isn’t involved, that he is certainly at another level.

A scene that has been restored features the burly Weng Hsiao-Hu as Yang Wei Wu, who fights Kong Kam with nunchakus. The finale features de rigueur 1970’s kung fu fighting with bursts of Jackie Chan’s flips and somersaults, and even a nice little bit of weapons work!

Although “Shaolin Wooden Men” is a fairly formulaic mid-1970’s kung fu film, it is a great example of the burgeoning talents of the young Jackie Chan. Although Lo Wei is credited as director, it’s fairly obvious that he wasn’t behind the camera for much, if any, of the movie.

Little Mute befriends the prisoner bringing him food and wine

The Prisoner takes on the fighting monks

Blinded by his desperation to find a “new Bruce Lee”, Lo Wei really couldn’t see what he had on his hands with Jackie Chan. Thankfully others did, and Jackie gets to show plenty of his phenomenal physical talents in this film that would set the gold standard just a couple of years later.

The young Jackie also delivers a reasonable acting performance too, considering he is mute throughout the vast majority of the film. Many of the training scenes, and in particular the Wooden Men Alley sequence, have gone on to influence (or just be blatantly copied by!) many other martial arts movies.

The picture restoration job for this film is truly astonishing. It makes it look like it was filmed yesterday rather than nearly half a century ago! Soundtrack options include the original Mandarin and subsequent Cantonese and English dub tracks, as well as an alternate Cantonese option featuring different music.

A couple of great new extras include Eastern Heroes video pioneer Ricky Baker’s discussion on the relevance of “Shaolin Wooden Men” in Jackie’s career. After nearly 50 years, Ricky is as enthusiastic and knowledgeable as ever about the subject matter.

The short documentary “Shaolin Chamber of Death” delves into the history of the Trans-Global Pictures 1980’s VHS releases in the UK of Jackie Chan’s films. As with many of these Blu-ray releases, there is another engaging audio commentary by Hong Kong cinema experts Mike Leeder and Arne Venema.

Jackie is in fine physical form

As well as making some insightful contributions on the film itself, there are some amusing reminiscences from Leeder regarding his time visiting the real Shaolin Temple with none other than David Carradine! An additional commentary from Asian cinema expert Brandon Bentley dwells more on the film itself.

88 Films have brought fans a top quality example of an old-school classic. This is a great example from Jackie Chan’s pre – “Snake in the Eagle’s Shadow” – era that proves not all of his efforts under the banner of Lo Wei went to waste!

“Shaolin Wooden Men” is OUT NOW on knockout Blu-ray, order your copy from 88 Films and Amazon!

Can you pass the SHAOLIN WOODEN MAN test? Well, going through the FUniverse will help along with with Jackie Chan’s Top 10 Fight Scenes, more Top 10’s, Top 5’s, exclusive interviews, get your SHAOLIN-style ON in KFK gear and subscribe for more HALLS of HARD FU on YouTube!