It’s ironic that in 2013 Paramount Pictures gave the greenlight for the Michael Bay-produced live action reboot of “Teenage Mutant Ninja Turtles” since they, along with other major studios, rejected the idea more than thirty years ago.

The reason for this is unknown, though rumours suggest the box office failure of Cannon Films’ “Masters of the Universe”. It made studios nervous about greenlighting another project based on a popular toyline, comic and cartoon show loved by kids and adults alike. Thanks to a major Hong Kong film company and a little known American studio, those pizza-eating, cowabunga-shouting heroes-in-a half-shell finally leapt into life on the big screen…Now join us for a Teenage Mutant Ninja Turtle 30th Anniversary Action Retrospective!

“Teenage Mutant Ninja Turtles”, the movie, was a co-production between Raymond Chow’s Golden Harvest Studios and Robert Shaye’s New Line Pictures, famous for unleashing the “Nightmare on Elm Street” films. Having been turned down by all the major studios the two joined forces, recruited music video and television director Steve Barron and brought Jim Henson’s Creature Workshop to bring the turtles to life. With a script based more on Kevin Eastman and Peter Laird’s original comic strip than the TV cartoons, “Teenage Mutant Ninja Turtles” was condemned by critics for its dark tone and excess violence, but loved by audiences becoming the highest grossing independent film of all time. Made on a modest budget of just $13.5 million, it took in over $200 million at the box office.

So thirty years on, does the original live action adventure of the sewer-dwelling mutant amphibians still have us believing in turtle power, or has time washed this first incarnation of the hero turtles down the drain?

Making up the voices of the turtle-powered ninja heroes are; Josh Pais as Raphael, Brian Tochi as Leonardo, “The Lost Boys” star Corey Feldman as Donatello, Robbie Rist as Michelangelo, and Kevin Clash as Splinter.

Judith Hoag is cast as intrepid Channel 5 reporter April O’Neil whose insistence on investigating the Foot Clan (believed only to be rumours) infuriates her boss Charles Pennington played by Jay Patterson. Unbeknownst to Charles, his son Danny played by Michael Turvey, is committing petty crimes for the Foot in the hopes of being recruited as a soldier. The Turtles are not the only ones keeping New York’s streets safe. Enter former hockey player Casey Jones played by Elias Koteas armed with an assortment of sporting sticks and bats packed into a golf bag, and a hockey mask as a disguise.

Heros in a half shell ready for action 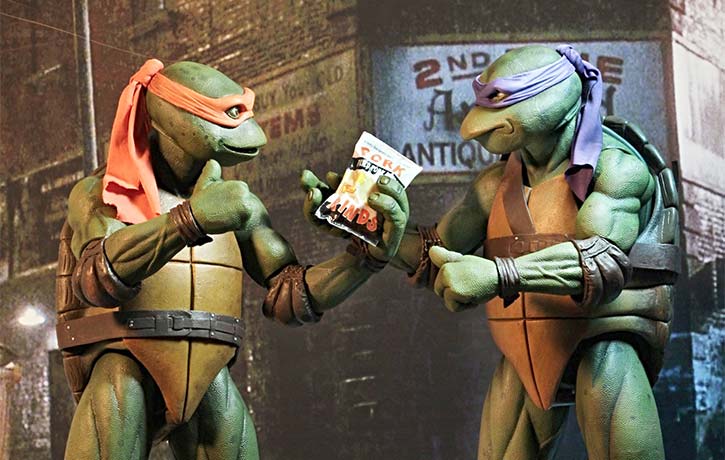 Living in the sewers of a crime-ridden New York City are four teenage turtles – Raphael, Leonardo, Donatello, and Michaelangelo led by their adopted father Splinter a rat all transformed by a toxic ooze into a tall-thinking and talking mutant versions of themselves and trained in the mystical art of the ninja.

The quartet of half-shelled heroes leave the sewers occasionally to fight crime. Local television reporter April O’Neil is investigating leads into a secret criminal organization called ‘The Foot Clan’ led by the mysterious Shredder responsible for the recent crime surge.

When Raphael saves April from an ambush by ‘Foot’ soldiers the intrepid reporter teams up with the shelled warriors and sports enthusiast vigilante Casey Jones, to expose the clan led by Shredder and take them down.

The pairing of ‘Karate Kid’ fight coordinator Pat E Johnson, and Hong Kong fight coordinator Brandy Yuen was the ultimate East meets West matchup at the time. Johnson brings his no-nonsense hard hitting style to the action whilst Yuen injects the speedy, high-flying fun factor that is the quintessential trademark of Hong Kong action cinema. Combined with the genius technotronic creations from Jim Henson’s Creature Shop the turtles were brought stunningly to life skulking in the dark, eating pizza and kicking serious butt.

The first real glimpse of ninja turtle power doesn’t come until 25 minutes into the film which passes quickly as the plot unravels and we have a little fun with the turtles’ own take on meditation and holding the pizza delivery boy to his delivery time. April’s first rescue in the film from some ‘Foot clan’ recruits was swift and clouded in fog, Raphael comes to April’s rescue once again with a more visible display of turtle fu; and it doesn’t disappoint.

Turtles vs The Foot Clan

The action doesn’t kick into high gear until halfway into the film when the turtles, regrouping at April’s apartment, take on a horde of Foot Clan ninjas. When it all kicks off, the mix of kung fu and comedy really come together. The blend of high-flying and kicking action with some old school slapstick fun and witty one-liners is the turtle battle moment you were waiting for from the moment the Golden Harvest drum sounded at the film’s start.

For the UK the eighties and nineties were a dark time for martial arts action with many great films heavily censored, in particular any scenes involving nunchakus. TheXse were cut back for the big screen and removed altogether for home entertainment. Now restored to the mix the film offers something new for those who enjoyed it the first time around but missed out thanks to the censors: ie., the Michaelangelo vs a Foot soldier (Kenn Scott) nunchaku showdown. Although brief, the scene is nonetheless packed with some swingingly-impressive nunchaku skills and great comic surprises making it one of the major highlights of the film.

Battle in the Big Apple

The final showdown packs in plenty of the comedic punch we saw earlier, but with the added anticipation of a face off with The Shredder.

Starting in the sewer with The Foot Clan raiding the turtles’ home, choreographers Johnson and Yuen pull out all the stops getting in plenty of hand-to-hand combat action and weapons skill, which at that point had not been seen on the big screen by western audiences for a long time. These overshadow Elias Koteas as Casey Jones with no outstanding scenes to call his own. Also underused is Toshishiro Obata as Tatsu Obata as Tatsu and could have done with more of his own scenes.

Still, the show belongs to the turtles and there’s plenty of fun to be had with more blending of action and comedy, and jaw-dropping skateboard stunts until the face off with Shredder. Presenting him as almost gargantuan compared to the turtles makes him a threat and the ease with which he counters gives Shredder that evil arrogance we expect from a supervillain. Of course this is a kids’ film with an edge and the filmmakers remind us of that with a lighter finish to the finale.

Thirty years on “Teenage Mutant Ninja Turtles” the movie, is a film of its time, with dated humour and cultural references likely to fly over the heads of a younger generation. The fight action whilst entertaining also feels a little out of time with the advent of CGI, motion capture and wire fu, not to mention the ever-evolving innovation of fight choreography.

Getting in some Turtle Time

Yet there are enough witty puns and one liners sure to crossover, and enough fight action to have younger audiences in awe of the turtles kung fu kicking serious ‘Foot Clan’ butt. For those children enthralled by the cartoon series back in the day, and young adults craving martial arts action which still hadn’t hit the mainstream cinema market (but is now prevalent in virtually every action film) the movie is a wonderful, nostalgic hit.

It serves as a reminder that you don’t necessarily need big budgets and computer effects to bring the heroes in a half shelf to life and have them display some nifty ninja-fu. Those added scenes, previously the victims of UK censors now restored, give the film a fresh lease of life.

Its success tied to two major studios known for their innovative filmmaking – Jim Henson’s Creature Shop and Golden Harvest Studios – “Teenage Mutant Ninja Turtles” the movie, leaves a legacy of being the first to achieve what at the time was considered virtually impossible. We’ve got the memorable lines, charm and some cracking, turtle-powered ninja action that will have us all wanting to punch the air and yell “Cowabunga” for some time to come – holler at us on KFK social media if you’re looking forward to the next part…!

Raphael about to unleash

At home with the Ninja Turtles

The Foot swoop into action

Time to slice things up

Donatello scopes this haunt out

It’s the 30th Anniversary of the “Teenage Mutant Ninja Turtles”…holy COWABUNGA…three decades since they first leapt onto our screens, what a nostalgic, excuse-for-pizza romp!

MUTANT NINJAS & TEENAGE TURTLES combine your chi and OOZE…martial arts prowess, leap into the FUniverse, with these Top 5’s, Top 10’s, exclusive interview, train YOUR hidden mutant ninja in Official KFK gear, and subscribe for the next stage of FU-volution on YouTube!