The “Tao of Jeet Kune Do” is the bestselling martial arts book in the world and it’s time we here at KFK reviewed this classic publication! And to give you the essence of it: “This Book is Dedicated to the Free, Creative Martial Artist. Take what is useful and develop from there.”

Containing Bruce Lee’s notes on his developing system, as well as sections including Zen, the book collects his notes and drawings of JKD into one document.

The book can be easily found at many book shops and most online retailers. Due to its popularity, it’s not always cheap to purchase, however the content itself could be considered priceless.  You can also buy downloadable versions, for those who like to read on electronic devices, tablets, smartphones etc. 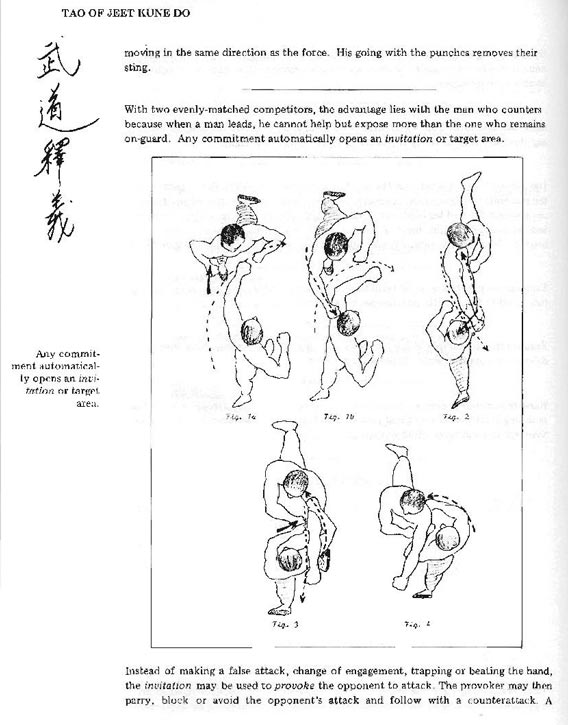 Any commitment automatically opens an invitation or target area

This version under review was published in the year 2000 and is approximately A4-sized and 1cm thick. A classic black and white image of Bruce Lee in a ready stance takes up nearly the whole cover.

The idea for this book started in 1970, Bruce Lee was resting after picking up an injury and he could not train his body fora number of months, this lead to the documentation of his thoughts and many drawings of his JKD system.

Following Bruce Lee’s death, Linda Lee Cadwell wanted to make public the material Bruce had written as he planned to publish them in a book but felt they might be ‘used for wrong purposes’. It has been noted before that Bruce was not keen on a ‘learn kung-fu in 10 easy lessons’ style of book.  The editor, Gilbert L. Johnson worked with Linda and Bruce’s students and friends such as Dan Inosanto to formulate the book’s contents.

The book starts with a translated document mentioning martial arts and boxing. Understanding techniques, precautions on physical techniques and then a very interesting paragraph on acquired talent and natural talent.  An introduction by Linda lee and editor Gilbert L. Johnson follows, providing a fascinating insight into how the book came about and was compiled.

A single contents page is next, highlighting how the 200-plus pages are split into sections. Then we move straight to some of the first sections, each only a few pages long, providing thought provoking passages of text such as,‘Nothingness cannot be defined: the softest thing cannot be snapped’.  These initial sections of the book cover: Zen, Art of the Soul, Organised Despair and The Formless Form amongst others.

Mobility The Snap Back

The book then moves onto ‘Preliminaries’ where training, warming up, on-guard and defensive positions as well as target areas are discussed.  This section has some of Bruce’s original sketches within it, as well as advice such as everyday opportunities for exercise for instance, parking the car a few blocks away so you are forced to walk further, taking the stairs instead of using the lift/elevator.

The next section discusses ‘Qualities’ which I think has a lovely headline – ‘It’s not daily increase but daily decrease – hack away the unessentials!’.  This chapter covers the qualities required for JKD – coordination, precision, power, endurance, timing and attitude amongst others.  There are some real gems of advice and guidance in here!

We move next to the chapter entitled, ‘Tools’.  This section highlights techniques for kicking, striking, grappling and a couple of pages regarding studies of Judo and Ju-Jitsu, all illustrated! There are some good techniques shown, including ‘Cross stomp’ and ‘Crouch to ground’.

The next chapters discuss ‘Preparations’ and ‘Mobility’ where feints and parries as well as distance and footwork are discussed. The final main chapter is devoted to ‘Attack’.  Here we have 40 pages dedicated to the preparation of an Attack, highlighting some simple attacks, counterattacks, renew attacks, tactics closing with ‘Five ways of Attack’ which includes progressive indirect attack and attack by drawing.

The final pages are further collections of Bruce’s notes covering wider character aspects, such as pride, desire, ‘the six diseases’ and other very thought-provoking paragraphs. These final chapters are titled ‘Circle with No Circumference’ and ‘It’s Just a Name’ where Bruce comments on self-knowledge and sense of worth among other notes.

This book has been a huge seller for many years and rightly so.  By putting together this book Linda Lee Cadwell, Gilbert L. Johnson and the others who contributed have preserved Bruce Lee’s thoughts about JKD and it ‘describes the direction of Bruce’s studies’.  While you will not want to put the book down once you start, the paragraphs are laid out in such a way that you can open the book at any page and have lots of stimulating information at your fingertips.  You do not really have to read it front to back like a traditional book and you can dip in and out, buffet-style.

I enjoyed this book immensely and would recommend it to all Kung Fu Kingdom readers and martial arts students (although I’d hope that many of you already have a copy, or at least have read it before). Many people credit this book for helping them with their martial studies and I can understand why. It should be required reading for all practitioners of martial arts as it gives you a great base to work with and the philosophy can be applied to all styles.

Studies on Judo and Ju Jitsu

There is a strong argument that the book should be read by all as the philosophy inside can be enjoyed by non-martial artists as well.  In short, martial arts student, Bruce Lee fan or both, get this book and read it!  If you have, let us know what your views below, or on Facebook or Twitter, check out our previous book reviews too.

What we'd like to see in "Iron Fist" Season Two