2018 has already kicked off with some heavyweight martial arts actioners such as Scott Adkins’ “Accident Man” and “Kickboxer: Retaliation”, as well as the anticipation of “Triple Threat” and “Deadpool 2”, you can’t go wrong with this year in action. Now we turn our attention to another relatively new, albeit lower budget film that received quite a bit of hype among the action film community: “Kill Order”. Directed by Hollywood stuntman James Mark and starring his younger brother Chris, this martial arts, sci-fi, indie thriller is an excellent example of how, with creativity and energetic effort, much can be done with little in the budgetary department.

Topping off the cast is Chris Mark as David Lee, a troubled high school student who struggles with horrifying memories and an alter ego ‘Yang’, whose only order is to kill. Daniel Park is David’s adoptive uncle, Andre Chan. Jessica Clement plays May, David’s classmate and love interest. For our villains, we have veteran actor Denis Akiyama head of the devious Saisei Corp., Shiro Fujitaka. Jonny Caines, Eli Martyr, Eric Daniel, Adrian Persad, and Jennifer Li portray henchmen of Saisei Corp. known as “Subjects”, and director James Mark plays Yin the mastermind behind the subjects and is accompanied by his assistant Agent Collins played by Jason Gosbee.

The story is like a sci-fi take on “Abduction” with some elements of “Headshot”. David Lee is a troubled high school student who is adopted by uncle Andre and is suffering from inexplicable, disturbing memories of a dark past, and his life worsens into a deadly game of cat-chase-mouse once he finds himself pursued by destruction-causing henchmen controlled by Yin of the nefarious Saisei Corp. But at the same time, a previously unknown alter ego eventually known as ‘Yang’ takes over David, allowing him to fight off his enemies. Now, David must call upon Yang to protect himself as well as his loved ones and get revenge.

David with an epic jacknife

Fury in the forest

The action in “Kill Order” is engaging, and it really does accommodate for David as a teenager struggling with his inner demons. The opening sequence is like something straight from “Hardcore Henry”, as it’s set in a lab from the first-person point of view of a human test subject. It feels full of dread-suspense, and sets the tone for the film, with our subject savagely killing a burning man (yes, a literal burning man) in front of him. We then turn to our protagonist David waking up from that torturous nightmare only to suffer from a seizure shortly after.

Out on a Revenge Order

Right around the ten-minute mark, our hero’s call to adventure begins when a tact team invades David’s classroom. Here, we have our first fight, where David turns into his other half Yang, (like Jin Kazama succumbing to the Devil gene or Ryu giving in to the Satsui no Hado) and takes out the soldiers in his possessed state. It is a brief yet intense beatdown serving as a warmup for what’s to come.

Before the 20-minute mark the second fight between David (Yang) and a henchman of Saisei Corp comes around. Starting with a quick show of fisticuffs, it immediately escalates into an eye-popping sword-duel demonstrating some well-planned and frenetic action choreography. The camera work doesn’t slack either -the camera moves around our fighters, getting the audience right in on the warring roller-coaster ruckus that unfolds.

On the tight end

The third fight however takes the adrenaline rush to a whole new level with David in a ‘one vs many’ frenzy. As soon as David takes out one henchman, he is faced with a dynamic duo consisting of a double-baton-wielding foe and a crazy-kicking femme fatale, both of whom prove to be quite a problematic challenge for David. The tables turn once David taps into his alternate form Yang, and by the time he equips himself with a metal pole, he gets down to more serious business. Chris Mark demonstrates some great staff skills here and viewers are taken through another high tide as they hear the clanging of metal on metal whilst witnessing increasing brutality.

In the finale, Yang wreaks havoc at Saisei Corp. HQ, now on a revenge order. He first takes out a group of officers with a flurry of kicks before re-engaging one of the subjects. What starts out as an exchange of hard hits between the two turns into another intense, all-out fight fest, with Yang as sharp as ever, spin-kicking with flair as he exacts his almost unquenchable thirst for revenge. 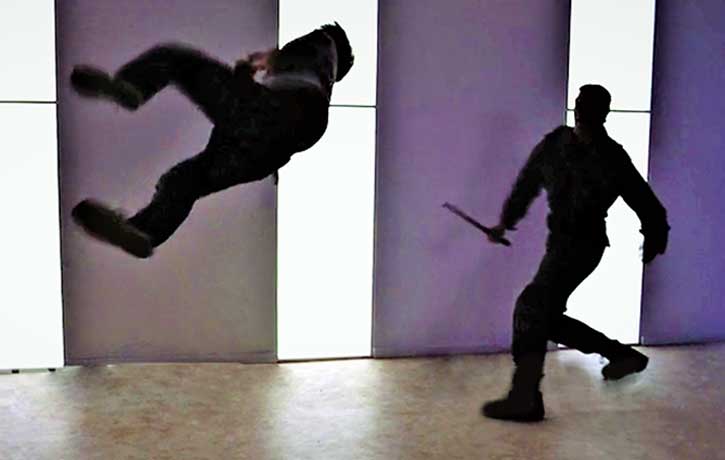 Yin attacks from behind

Yang looks ahead at the turmoil

David is not your average high school student

“Kill Order” is an indie film with the right ingredients as far as die-hard action purists are concerned. The story and acting would need a bit of polish (if there’s to be a part two for example) but it’s a delight to see this kind of ambitious combo where sci-fi meets “Headshot” meets “Abduction” meets “Hardcore Henry”. With awesome fight scenes along with half-decent visual effects, you’d be remiss not to put your popcorn and drinks down sometimes lest you miss some of the insane moves pulled off by Chris Mark – his standout performances are worth the price of the movie itself! In the realm of indie fight-action films “Kill Order”, is definitely one you want to check out.

“Kill Order” is available on DVD and VOD courtesy of RLJE Films.
Have you noticed the trend in martial-art / sci-fi combos, what’s been your fave of this ilk so far? Let us know below, join in the conversation on Facebook and follow us on Twitter. (Check out our other fu-filled reviews too!)