While it may be the third chapter of the ongoing DC Extended Universe, “Suicide Squad” is truly a first – a comic book movie that’s all about the villains and writer-director David Ayer and his ensemble cast don’t intend to squander that opportunity in the least. While “Man of Steel” and “Batman v Superman: Dawn of Justice” blended huge scale action and stunning comic book-style visuals with a philosophical meditation of the role of heroes in the world, “Suicide Squad” uses its most atypical premise in superhero cinema as a chance to truly cut loose and deliver the flashiest, fun and laugh-out-loud hilarious film in the DCEU yet!

Will Smith steps into the role of hitman and impeccable marksman Floyd Lawton, aka Deadshot, and like the rest of his fellow evildoers, he’s kept in line by the ice cold, Machiavellian government operative Amanda Waller, played by Viola Davis. She orchestrates the team’s formations with the help of her right hand man Colonel Rick Flag, played by Joel Kinnaman.

The devilish but sweet hearted psychopath Harley Quinn makes her big screen debut in the film, played by Margot Robbie, as is the case for most of the Suicide Squad, including the reptilian sewer-dweller Killer Croc, played by Adewale Akinnuoye-Agbaje, Australian bank robber Captain Boomerang, played by Jai Courtney, the pyrokinetic flamethrower El Diablo, played by Jay Hernandez, expert assassin Slipknot, played by Adam Beach, and Japanese swordswoman Tatsu Yamashiro aka Katana, played by Karen Fukuhara.

Cara Develingne portrays Flagg’s girlfriend Dr. June Moone, whose alter-ego, The Enchantress, becomes a major adversary for our not-heroes. Of course, if you’ve seen any of the trailers, you know that Ben Affleck reprises his role of Batman in the film and he’s joined by the newest iteration of his archenemy, the Clown Prince of Crime himself, The Joker, played by Jared Leto. Ezra Miller who also pops up for a brief cameo reprises his role of Barry Allen and you’d better time your bathroom breaks for this film carefully, because like his character he comes and goes in a Flash!

It’s been some time since Superman sacrificed his life to defeat the rampaging monster Doomsday in “Batman v Superman” and more and more “metahumans” have begun to emerge from the shadows across the globe.

Katana is swish with a blade

Killer Croc fresh from the sewer

The Joker and Harley Quinn are pretty close

Were bad guys thats what we do

Fearing what might happen if one of them might not have the Man of Steel’s heart of gold, U.S. intelligence officer Amanda Waller sets about putting together a team codenamed “Task Force X”, comprised of dangerous and unpredictable criminals who are coerced into using their abilities on top secret missions for the U.S. government in exchange for reduced sentences.

Under the supervision of Waller’s right-hand man Colonel Rick Flag and his bodyguard Katana, the new team, which its resident assassin Deadshot nicknames “a Suicide Squad”, quickly finds itself on their first mission after Flag’s girlfriend, Dr. June Moone initiates a plot to get out from under Waller’s clutches in the form her alter-ego, the centuries’ old Enchantress. The mission only ends up being further complicated with the arrival of The Joker, whose lover Harley Quinn is one of the criminals Waller has pulled into the team.

In the current wave of superhero cinema, what might be called the “cinematic universe” era, we’ve seen comic book based properties truly stretch their legs and show that the adventures of our modern, spandex-clad titans can reach new heights of greatness, operating in different genres, posing philosophical challenges to viewers and delivering action on a scale never thought possible before the 21st century.

“Suicide Squad” is exactly what both the DCEU and comic book films in general need for their ongoing evolution right now – a black comedy that’s pure bubblegum entertainment and expands its world in new directions. There’s not a moment of tedium in the film’s 123-minute running time, much of which will have audiences absolutely howling with choruses of laughter. If you thought the DCEU was lacking in levity, prepare to have that remedied about twenty times over! The paradox of the film is that, while the Suicide Squad may be on Amanda Waller’s leash, its currency is the fun and freedom that comes with being a bad guy and the entire cast absolutely devour their respective roles.

Everything is a joke to Mr

Will Smith and Margot Robbie are both a couple of walking one-liner machines and steal many of the film’s best laughs and most quotable lines, while Viola Davis’ ice cold portrayal of Amanda Waller is sure to make her a true thorn in the side of the hero and villain communities alike as the DCEU continues to unfold. Jai Courtney also delivers what will likely be his breakout role as Boomerang, while Jay Hernandez gives a subdued, somewhat tragic portrayal of El Diablo and Joel Kinnaman is far better served here than in 2014’s tepid “Robocop” reboot. As for Jared Leto, his take on the Joker is the perfect psychotic crime boss of Gotham City, coming and going as he pleases and stealing every scene he’s in with such vigour that one cannot help but get psyched to see him go head-to-head with Ben Affleck’s Batman when the time comes for The Caped Crusader’s solo outing (though, I confess, Heath Ledger’s haphazardly smeared clown make-up and greasy hair is still my personal favourite look for The Clown Prince of Crime).

As has been the case for the DCEU from the start, “Suicide Squad” is a relentlessly fast-paced comic book adventure, as packed with action as it is with jokes. Jackie Chan’s long-time collaborator Richard Norton steps into the role of fight choreographer and does the DC Universe proud. Most of the action sequences pit the team against swarms of Enchantress’ faceless zombie minions (this is about the closest DC’s come to doing a zombie movie thus far) and gives every member a chance to show off their stuff against multiple opponents.

Katana snags some good moments of genuine Kenjutsu with her soul-stealing blade, though she’s somewhat more in the background of the team and one gets the impression the film is laying the foundation for her to truly shine later on. The same can be said of Killer Croc, who does more snarling than speaking, but both prove themselves important players on the team in the final act.

With much of the action taking place against swarms of enemies, it’s somewhat surprising that Harley Quinn features in the only significant one-on-one set piece against one of Enchantresses’ minions in an elevator and what’s equally surprising is the amount of physicality Robbie brings to the role. She glides and slides through the film like a pro-wrestler who’s studied ballet and subdues her enemies with a flying neck scissor takedown at least three times including in the aforementioned elevator brawl.

Amanda Waller has a crazy idea

Boomerang and Katana sneaking in

El Diablo is the Firebending natural

El Diablo also really steals the thunder with his pyrokinesis (side note – whoever decides to take on the task of rebooting “The Last Airbender”, THIS is what Firebending should look like in live-action form!)

Batman’s appearance in the film isn’t as extensive as you might think from the trailers, largely (but not entirely) consisting of flashbacks showing his apprehension of Deadshot and Harley Quinn, but Ayer’s stated intention of showing Batman from the perspective of the villains he pursues really works well and isn’t something audiences get to see too often.

What we also haven’t seen too often is Harley Quinn with a physicality that blends ballet with pro-wrestling manoeuvres, which she really gets to show off in several set pieces including an elevator fight with one of Enchantresses’ minions. The final battle pitting the team against Enchantress brings the scale down just a fraction from the Trinity’s duel against the walking supernova that was Doomsday. It works perfectly for the scenario to give our non-heroes a pinch of humanity, especially El Diablo and of course it also lets Richard Norton work his magic on the fighting styles of the whole team.

And all of that isn’t even getting into the film’s eclectic soundtrack that will have every audience member bopping and humming along – ranging from artists like Eminem, Twenty One Pilots, Credence Clearwater Revival, Lil’ Wayne, Whiz Khalifa, AC/DC, and Queen, “Suicide Squad” may well sport the best soundtrack in a comic book movie to date!

While “Man of Steel” and “Batman v Superman” delivered the meat and potatoes of the DCEU, “Suicide Squad” is a shot in the arm of pure fun and adventure, one that tickles the funny bone in a surprising and engaging way. There’s no better way to close out the summer than a caper with the Suicide Squad and hopefully the DCEU will have room for the team’s next mission as it unfolds. And be forewarned – if you walk out of this one before the credits wrap up, it won’t kill you – it’ll just hurt you really, really bad!

The Jokers way of gaining information 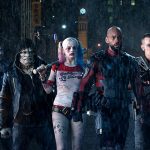 The Suicide Squad get a new mission