The sheer fun of action movies that utterly delight in how much they can astonish an audience is an attribute that cannot be mistaken when it’s prominent.

When it comes to director Le-Van Kiet’s “The Princess”, it isn’t just prominent, it’s on fire! In a remarkable action movie turn by Joey King, “The Princess” is the most jam-packed martial arts bonanza that a medieval set and timeframe in the Middle Ages can summon up…

Calling it merely ‘a blast’ undersells the thunderously good time that “The Princess” amply provides here which you can see NOW on Hulu!

Veronica Ngo plays the Princess’ combat trainer Linh, with her mother and father, the King and Queen, played by Ed Stoppard and Alex Reid.

In a medieval kingdom, the King and Queen who rule over it with kindness seek to wed their elder daughter to Julius, a diplomat’s son with a much greater bloodlust and urge to go to war than the ruling family.

After the Princess balks at her betrothed marriage, Julius and his forces seize the castle, capturing the King, Queen, and their youngest daughter Violet. They proceed to chain the Princess in the highest tower as preparations are made for a second attempt to wed her to Julius.

Little do Julius and his foot soldier know that not only is the Princess prepared to strongly defy her forced marriage, but she has the fighting skills to do so, having been secretly trained growing up by the niece of one of the King’s associates, Linh.

Despite being chained, the Princess wastes no time in breaking free and fighting her way to the bottom of the tower to save her family and the kingdom.

The Princess turns out to be a great warrior

“The Princess” is Action-Packed!

“The Princess”, in its lean 94-minute runtime, is not only a very energetic contender for 2022’s best action movie, it’s also all but certain to win the crown of its most thoroughly action-packed.

“The Princess” gets started with its butt-kicking mandate mere minutes into its opening, stopping for a mug of ale (in one case, literally) as a formality at most.

Comparisons to “The Raid” not Surprising…

You’re bound to see comparisons to “The Raid” all over the place in reactions and reviews to “The Princess”, and they couldn’t be more apt.

Spiraling to the ground floor of the castle, “The Princess” is a twister of punching, kicking, and sword-slashing of regal energy.

The Princess roars into battle

Time for an old school brawl

“The Princess” also keeps everything quite varied, with armored opponents, swarms of Julius’ henchmen, double-team battles, and one-shot fights all coming up to bat, one after another, each more bruisingly electrifying than the last.

It’s oddly fitting that Joey King and Veronica Ngo should both feature in “The Princess”. Like Ngo’s breakout martial arts role in “The Rebel”, Joey King walks away with the throne of Best New Action Star of the year with her grippy portrayal of the never-named Princess.

Julius has sinister plans for the kingdom

The Princess uses her enemies arrogance to her advantage

The blood, sweat, and tears that emanate from every moment of her perpetual fight scenes is everything action lovers simply live for.

Veronica Ngo just adds more of that energy to “The Princess” as Linh, and while her fight scenes are mostly set in the movie’s final third, she and King together are a marvel of blades and fists in tandem with one another.

The Princess also finds the perfect foil in Moira’s whip combat, which plays out in both visceral and bloody ways in her service to Julius and battle with The Princess.

In her ambition to become a knight, the Princess more than earns that honor not simply for herself, but for the crazily action-packed medieval smackdown / slashdown of a movie that she’s the heroine of.

“The Princess” is an action movie that’s simply exuberantly keen to show off everything they can do, with no muscles left to flex by the end.

Joey King’s debut as an action heroine is arguably the best for a newbie martial artist in years, with the movie giving viewers nothing but crazy amounts of action-packed fun with her, Veronica Ngo, Olga Kurylenko, and a ton of stunt people more than happy to plummet from one floor of the tower to another. 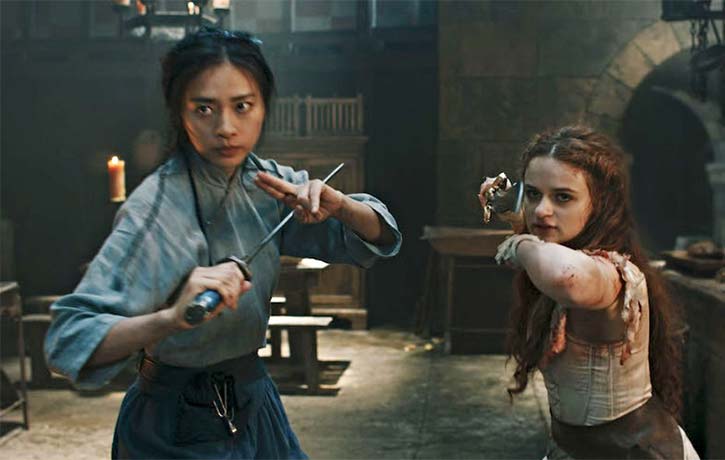 The Princess and Linh break out their blades

The Princess dreams of becoming a knight

“The Raid’ in a medieval castle” might not have been something many viewers were expecting, but that’s what you’re getting served up admirably with the arrival of “The Princess”!

The Princess is baffled by her captors insolence

The Princess prepares her escape plan

The Princess is now streaming on Hulu KUNG FU KINGDOM

“The Princess” is streaming NOW on Hulu!

Have you seen “The Princess”? What are your thoughts on the movie’s impressing action and fight sequences, and Joey King’s performance given that she did most of her own stunts? Would you like to see more medieval, period-style movies in the vein of “John Wick” or “The Raid”? Let us know in the comments below, join in the conversation / share this on Facebook, and follow us on Twitter & Instagram!

WARRIOR Princesses and Princes assert your royal rights in the KINGDOM of FU with our Top 10’s, Top 5’s, exclusive interviews, including our interview with Clayton Barber, SCALE the TOWERING HEIGHTS of training in official KFK gear, and subscribe for a RIGHT ROYAL bonanza of FU on YouTube!