Talks of a live-action Star Wars series had been thrown around since early 2009, and for a long time was deemed impossible on a television budget. That all changed in 2018 when it was announced that Jon Favreau of Marvel Studios fame would be helming “The Mandalorian”, which premiered with the debut of the Disney+ streaming service on November 12, 2019 in the United States. Alongside Favreau is the well-versed storyteller Dave Filoni serving as executive producer, who has worked on other legendary projects like “Star Wars: The Clone Wars” (2008), “Avatar: The Last Airbender” and currently oversees all Lucasfilm Animation projects.

In the Star Wars universe Mandalorians have a fearsome reputation for being the most capable, honorable warriors in the galaxy; a reputation they are quite proud of. It didn’t matter whether it was a rifle, a blaster, a knife, or their own bare hands; they were equally lethal with all of the above. In order to properly convey the combat prowess of these historically warmongering people, Hollywood stunt coordinator Ryan Watson, who has choreographed films such as “Wonder Woman”, “Batman v Superman – Dawn of Justice” and “V for Vendetta”, was brought on board to add authentic martial arts technique to the numerous brawls in the series.

Set five years after “Return of the Jedi” and the fall of the Empire, “The Mandalorian” follows a mysterious bounty hunter (simply known as ‘The Mandalorian’) beyond the reach of the New Republic, trying to get by whilst also trying to contribute to his enclave of fellow Mandalorians in these lawless times.

Becoming bored of the usual bounties, which don’t pay all that well in the first place, The Mandalorian takes a strictly off-the-books job that pays handsomely. But when confronted with the high-value target, he makes a judgement call to spare and protect the target. It is now The Mandalorian against everyone else, as we follow his adventures into perilous danger!

A Mandalorian with a knife is an army

I got you right where I want you 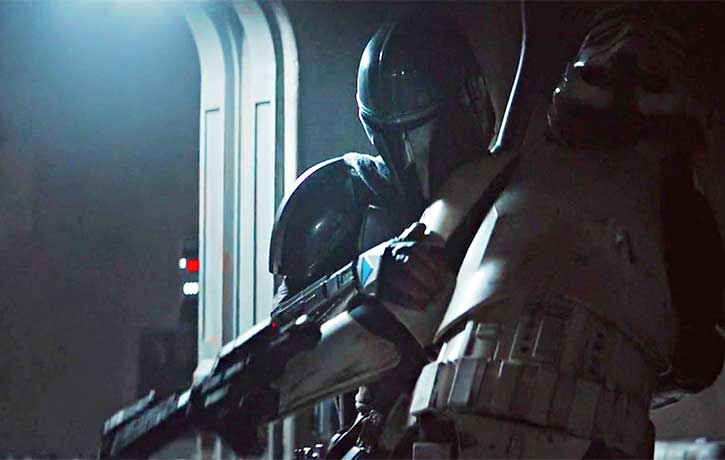 Given the dangerous nature of his profession, The Mandalorian runs into a lot of (armed) trouble while on the job. The Mandalorian executes many disarms, reversals, throws, and wrist locks straight out of Kenpo or Kali (the Filipino martial art form also known interchangeably under the terms, Escrima or Eskrima and Arnis) against anyone who dares threaten him with a small weapon.

There is a particularly strong influence of the empty hand techniques of Kali, which although a pragmatic weapons-focused art, also includes aspects such as joint manipulation and breaking, trapping, and improvised weaponry.

The weapons focus of Kali can be seen in how The Mandalorian wields his arsenal. For example, he has a disintegration rifle that doubles as a high-powered stun baton on one end which he wields like a staff and spear when enemies are too close for comfort to be picked off from a distance. If need be, The Mandalorian also has a classic vibroblade for when he needs to get up close and personal.

Gina Carano setting up for a sacrifice throw

Both equally fast with a vibroblade 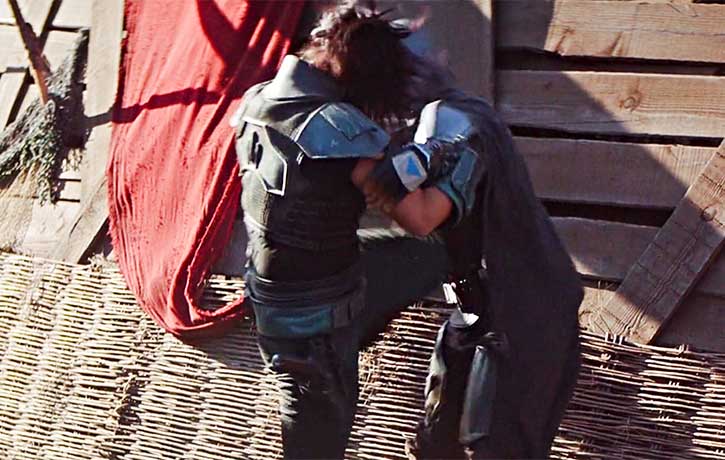 Gina Carano using the clinch to set up knee strikes

Where does he get those wonderful toys

A new character to the Star Wars universe being first introduced in “The Mandalorian” is ‘Cara Dune’, a former shock trooper for the Rebellion during the Galactic Civil War days. Being ex-special forces, she is of course more than capable in a fight.

Gina Carano, who portrays Cara Dune, is a former professional mixed martial artist who originally began training in Muay Thai before competing in the now-defunct organizations Strikeforce and EliteXC. Her MMA background comes in especially handy in her fight scenes as Cara Dune; easily transitioning from standing and striking, to the clinch and knee strikes, to sacrifice throws (a move seen in grappling arts like Judo and Brazilian Jiu Jitsu), and even German suplexes straight out of WWE.

A More ‘Grounded’ Style of Action

The plentiful melees throughout the series are purposeful and not excessively flashy as in Hong Kong action films or modern Wushu for example. It is meant to convey a more grounded, gritty sense of realism (as realistic as Star Wars can be anyway) since we are peering into the Star Wars underworld; far removed from the grand mysticism of the Jedi and Sith.

Star Wars’ first foray into the small screen (on a streaming service) with “The Mandalorian” has been successful so far. Showrunners Jon Favreau and Dave Filoni have managed to capture the very essence of the Star Wars magic in bringing this Western-in-space to life. It’s not just a good story, but a good Star Wars story.

Of course, when it comes to Disney, they usually set the bar pretty high selecting the best people for the job. Stunt coordinator Ryan Watson brings his ‘A’ game to the action choreography, truly showing the audience how a Mandalorian fights – and it certainly doesn’t hurt to be working with such capable talent as Gina Carano.

Youre now a wanted man

Quicker on the draw

Peering into the void

Have you caught any episodes of the space action-adventure “The Mandalorian” on Disney Plus yet? What are your impressions? What action moments did you enjoy the most so far…? Let us know in the comments below; Like, share and join in the conversation with us on Facebook and follow us on Twitter & Instagram.

TAKE YOUR STAR WARS FIGHTS TO NEW HEIGHTS IN THE KUNG FU-NIVERSE of reviews, news, Top 5’s, Top 10’s, in-depth interviews, fill your Christmas bounty with KFK gear for the martial arts warriors in your life and stay tuned for more WAY OUT THERE moves by subscribing on YouTube!