Kevin Derek’s documentary looks back at the astonishing influential life of Sensei Fumio Demura, from his arrival in the US to his becoming one of the most revered figures in the world of Karate.

Appearing in archive footage were martial artist and actor Robert Wall (aka ‘O’Hara’ in “Enter the Dragon”) Pat Morita (as both himself and ‘Mr Miyagi’), Ralph Macchio (as ‘Daniel’) and Chuck Norris.

Demura in the middle of one his famous demonstrations

A student pays her respects to Sensei

The film charts the extraordinary life of Sensei Fumio Demura, from his early years in Yokohama, Japan as the son of a silk tradesman to his decision to travel to America. With only $300 and a suitcase, and with no grasp of English, Kevin Derek’s affectionate documentary looks at the rise of a young Fumio overcoming prejudice and racism to become one of his generation’s most influential Karate masters. The film takes a darker turn when a year into production Sensei Demura falls into a coma with a slim chance of recovery.

Fumio Demura in his prime

Those familiar with the cliché that martial arts are more than just about kicking and punching but a lesson in life and spirit will appreciate writer/director Kevin Derek’s approach to telling his Sensei’s story.

Sensei Demura’s physical skill and abilities are well documented and recorded, yet few are featured in this film. It does start off with some old footage of Demura in action, from his fun-filled choreographed demonstrations in which he takes out a few attackers with a range of techniques to his deadly Nunchaku skills. The sight alone of Sensei smashing apples off the heads of his students with the famed rice beaters is jaw-dropping enough leaving you wanting more yet Derek has chosen to be sparse with such material. Instead he invites the audience to peek behind the veil of a legend and to know the man who’s the face – and shaped the influence – of Karate in the US.

Sensei Demura showing how to use Sai against a katana

What’s perhaps most revealing is how this larger-than-life Sensei is a genuine, down-to-earth man un-phased by the adulation of students and masters alike. Derek skilfully presents us a man humbled by his life’s battles which resonate synonymously with his life as a Karate teacher. Tales of young Demura’s life of poverty in Yokohama are simply heart-breaking, one story sees his brother tearfully recounting how their mother was forced to pawn her kimono to buy rice. What really hits home however is the bitter racism Demura battled in post second-world-war America. Stories from Michael Matsuda, head of the Martial Arts Museum, as well as Sensei’s own memories accentuate the struggles he overcame.

Derek does however, inject much optimism in Sensei Demura’s extraordinary tale, despite him being in the coma through its production. We learn about Sensei’s love of pizza (which contributed to his heart attack), the friendships forged with the likes of Pat Johnson and Chuck Norris, his brush with Hollywood, and course his touching relationship with “The Karate Kid” star Pat Morita. Whilst the ending gratifies, Derek ensures that the film remains an unfinished tale rather than an epitaph, an affectionate record of a remarkable man.

A master with the Nunchaku

Catching and hooking with the Nunchaku 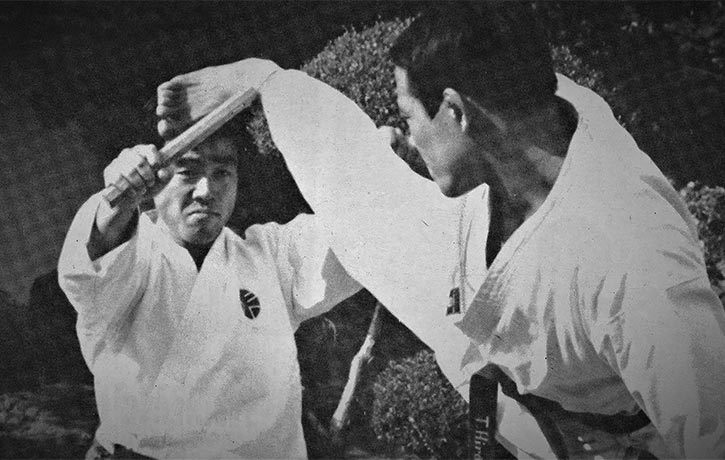 No matter which ‘style’ of martial arts you happen to study, everyone should have some awareness of the life and achievements of Sensei Fumio Demura. If not, this film serves as the perfect introduction to Sensei. “The Real Miyagi”  is less documentary, more homage to a man who overcame the obstacles of poverty and prejudice to inspire two generations (and counting) in the world of martial arts.

Director Kevin Derek lets Sensei Demura tell his own story, with added insight from those who call him family, friend and teacher. It’s a touching tribute, made more heartfelt told in the wake of his near-death collapse and subsequent remarkable recovery. For those looking for an objective tale, this may seem a tad sentimental as it’s essentially a film made by martial artists for martial artists. In charting Sensei Demura’s rise to Karate master the “The Real Miyagi” does so with insightful detail wearing its heart firmly on the sleeve of its gi.

Seen “The Real Miyagi”, what did you think of it and who do you rate in the world of Karate? Let us know in the comments below, join in the conversation on Facebook and follow us on Twitter (don’t forget to check out our previous movie reviews)!